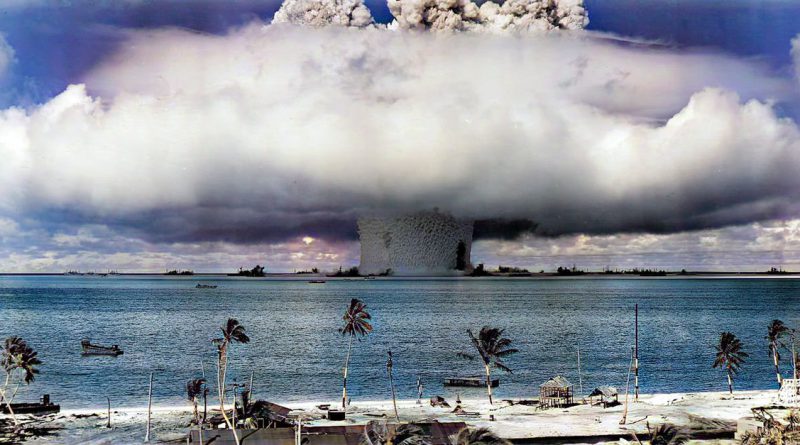 The Marshall Islands may look like a tropical paradise from a distance, but such beauty hides deadly radiation and mass destruction of the environment and culture from repeated nuclear testing. After sixty years of evading legal and moral responsibility, the United States must address this dark nuclear legacy and the injustices inflicted on the people of the Marshall Islands.

It all began after Harry Truman ordered the atomic bombings of Hiroshima and Nagasaki, shocking Japan into surrender. What happened next was a tiny detail on America’s agenda but life-altering for the innocent people of the Pacific Marshall Islands. Shortly after the Japanese surrendered, the US Navy began hunting for the ideal spot to conduct a massive nuclear weapon testing program. They found it 4,993 miles due west from Los Angeles, midway between Hawaii and the Philippines. The US Navy uprooted thousands of Marshall Islanders from their lush ancestral land, clearing the way for US nuclear weapons testing. Between 1946 and 1958, the Marshall Islands, then an American protectorate with an estimated indigenous population of 50,000, became the scene of 67 nuclear detonations. The force released during this period equates to the detonation of 1.6 Hiroshima bombs every day. Furthermore, without the consent of the Marshallese, biological weapons testing was also conducted and kept secret until 2002.

Seventy-five years after testing began, many islands remain uninhabitable due to radiation levels 4 to 1,000 times higher than those measured at Chernobyl. And the thousands of Marshallese who the Navy told were being temporarily relocated to other islands and would be safely returned by 1949 are still not home.

Since the American nuclear project brought suffering and boatloads of empty promises to the people of the Marshall Islands, US government actions to redress the compounding injustices are grievously lacking. Nearly half of the people alive during the nuclear testing period now suffer from various cancers and painful comorbidities. The independent Nuclear Claims Tribunal, established in 1988 by the US and the newly formed Republic of the Marshall Islands, concluded that the US owes the victims of US testing $2.3 billion in claims. To date, Washington still rejects this amount and has paid out only $4 million in claims.

In 1977, nearly two decades after the last explosion, the US cleanup operation began. This process resulted in the infamous Runit Dome, an 18-inch-thick concrete structure covering 35 Olympic-sized swimming pools crammed full of plutonium-239-contaminated waste. Unlike other radioactive isotopes that are lethal for 30 to 40 years, plutonium-239 remains deadly for 24,100 years. Even more concerning is that the Runit Dome’s construction does not even meet the safety requirements of American landfills designated for household waste. The concrete tomb of nuclear waste is still leeching radioactive isotopes into the Pacific, further compounding America’s devastating nuclear legacy.

The deteriorating state of the Runit Dome adds to the mounting pressure on the US government to fulfill its legal obligations and prevent additional nuclear calamity. The Biden administration must be motivated by its moral and national security imperatives to fulfill America’s promises to the people of the Marshall Islands inscribed in the ratified 1983 Compact of Free Association (Compact) which will expire in 2023.

With the Compact’s expiration just around the corner and escalating Chinese efforts to dominate the western Pacific, some members of Congress are pressuring the White House to restart negotiations and extend the Compact to safeguard the strategic US Military Pacific stronghold. For the negotiations to succeed, the Biden Administration will have to make good on America’s unkept promises to the people of the Marshall Islands in the name of US national security, if not in the name of morality, humanity, and justice. The Biden Administration should break from the longstanding US government pattern of shrugging off Marshallese demands for nuclear justice. The Marshall Islands National Nuclear Commission demands full payment of outstanding Tribunal claims, quality health care for all Marshallese, environmental clean-up and restoration, and the tools to independently monitor US nuclear radiation and protect communities from chemical impacts.

Building on the history of apologies for bad American behavior in other matters made by previous presidents, including Reagan, Clinton, and Obama, the renegotiated Compact must also include a formal acknowledgment of the full range of injuries and damages to the people of the Marshall Islands. This recognition, preserved for the record, combined with a renewed commitment to uphold the promises of the original Compact to address past and ongoing injustices, will help President Biden restore America’s moral leadership on the world stage and set a new precedent of decency for grappling with difficult, colonial legacies.