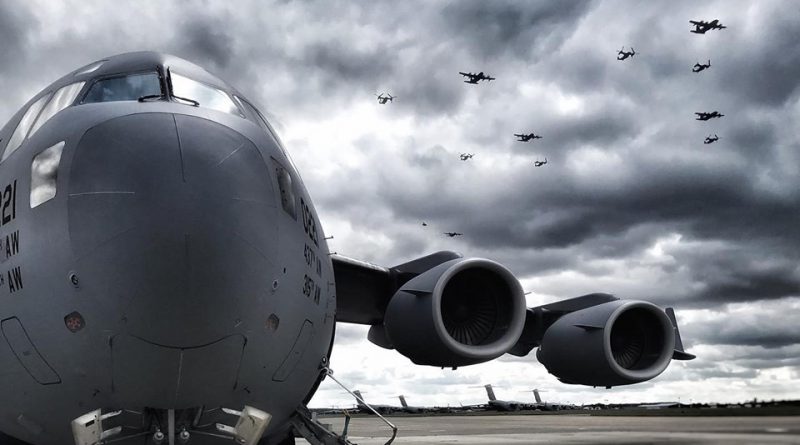 The 2018 National Defense Strategy (NDS) identifies the “reemergence of long-term, strategic competition” as the central challenge to U.S. national security. But how exactly should we interpret strategic competition, and what role does Airpower play in providing an advantage? “Who” we seem to be competing against has remained largely unchanged over the last quarter century. Russia is still actively seeking to destroy NATO by increasing diplomatic and economic veto-authority over bordering nations, and China is pursuing regional hegemony with a modernized military competing in previously uncontested domains (NDS, 2018). In maritime theaters, the United States is challenged by anti-access/area denial (A2/AD) capabilities designed to offset U.S. military power. By creating an invisible shield, or at least the credible threat of one, U.S. freedom of movement is restricted forcing military planners to think through combat operations without the benefit of an unrestricted and uncontested environment for the first time in a long time.

According to Air Force Doctrine, “Our adversary’s A2/AD focus and proliferation of advance technologies create contested environments that reduce airpower’s ability to conduct global operations across the competition continuum, reduce freedom of maneuver, and challenge the Air Force’s ability to operate.” As many nations wonder whom to strategically align with, this seemingly ‘open confession’ validates subversive Chinese and Russian indictments of a waning American influence; by targeting U.S. preeminence, China and Russia undermine U.S. alliances and American influence writ large, destabilizing what the NDS describes as, “the backbone of global security.” Consequently, in March 2021, and in recognition of a need to strengthen the weakening post-WWII international order, President Biden issued an Interim National Security Strategic Guidance (INSSG) charging military leaders to “reinvigorate our alliances and partnerships,” which have been threatened by recent A2/AD weapon advancements in the East and Russian aggression toward Ukraine in the West.

Alliances depend on assurances, and for the U.S. military this means assuring through the competitive advantage of “Global Vigilance, Reach and Power” – inherent responsibilities of the U.S. Air Force. Strategic competition, then, can be defined in terms of competition for continued strategic advantage…anytime, anywhere, as only airpower can assure for her allies.

Concerns surrounding America’s ability to lead global security are directly proportional to rising tensions in the South China Sea and eastern Europe. U.S. strategic advantage depends on the international community’s confidence in America showing up at a moment’s notice and executing. For NATO, this means protection against the negative spillover effects of a Russian land grab and assurances of America’s high-end Article 5 commitments through airborne interoperability – underscoring that an attack against one really means an attack against all. For individual nations, “reinvigorating” alliances and partnerships means re-convincing them of America’s ability to gain and share knowledge, project military power responsively, and create decisive effects while holding any target anywhere at risk (AFDP1, 2021). Multi-lateral, show of force exercises designed to sharpen this three-pronged advantage through “Vigilance, Reach, and Power” can help restore confidence as well as provide foreign military leaders justification within their respective governments for continued partnership well before a major combat operation demands it. Increased faith in our abilities ahead of time will ensure greater coalition participation should conflict develop. For as long as America’s reputation remains a competitive advantage for her allies and partners, her allies and partners remain a competitive advantage for U.S. interests abroad. However, a good reputation is hard to earn…and easy to lose.

For example, China and Russia quickly capitalized on the U.S. withdrawal from Afghanistan to sow distrust among American allies. The historic noncombatant evacuation, though the largest of its kind, has been characterized negatively as a lack of U.S. commitment to her partners, like Taiwan. In future crises, the U.S. risks nations looking to Beijing or Moscow for leadership, which contracts the network American forces depend on for continued vigilance, reach, and power. Should America’s team shrink, partnership would become less attractive and increase the likelihood of unilateral action. America depends on a robust network of partner nations sharing intelligence and ensuring mutual freedom of movement to prosecute global threats.

When possible, proactively displaying Global Vigilance, Reach and Power in large-scale multi-lateral exercises, and when called upon, demonstrating its effectiveness in conflict…acts to edify the coalitions America has built and keeps the United States competing for advantage through allies and attracts new partners, America’s “greatest strategic asset” (2021 INSSG). Despite the great distances separating American-led coalitions complicating operational design, America’s allies and partners must know, implicitly, the United States’ unwavering commitment to re-concentrate combat power to their need in the midnight hour, and that we will “prevail in strategic competition with China or any other nation” shoulder to shoulder (2021 INSSG). As former Secretary of Defense and retired General Jim Mattis once said, “[we ought to] demonstrate to the world there is ‘No Better Friend, No Worse Enemy’” than the U.S. military. With airpower, we’ll get his Marines and the rest of the Joint Force to the fight…and win anytime, and anywhere.