Home > Articles > What about Design? Understanding the Biden Win from an Aesthetic Perspective 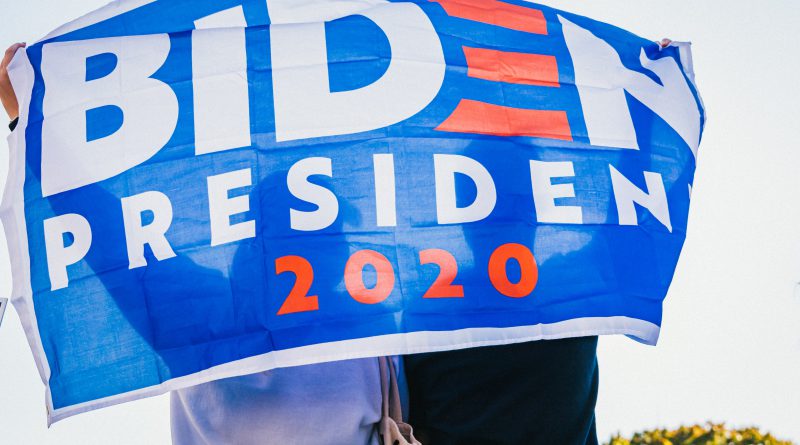 Campaigning in a pandemic demanded a kind of aesthetic deference—but only one campaign showed it. President Trump’s brazen strokes, effective in a bygone era, got lost in the mix of exponentially increasing infection rates and state-mandated lockdowns. President Biden won, in part, because his team quietly navigated a lopsided electoral landscape wrought by
COVID-19 using data, adaptability, visual adroitness, and respect for the dimensions of our gadget screens to stay ahead.

Beginning with dispensers of hand sanitizer outside of campaign events and ending with “voluntarily assume all risks” waivers for audience members, the pandemic created an unprecedented campaign trail. From March to June, in-person events were nonexistent; candidates spoke directly from the White House or their basement.1 President Trump’s
inaugural post-shutdown rally started at the beginning of summer—and in-person events continued until January 6—while then-candidate Biden spoke to audiences of roughly 100. Rather than in-person events, the candidates cut profiles of themselves and their opponent in the digital environment—2020’s public canvas.

While the conditions of the campaign trail were identical for both candidates (the virus has no creed), each campaign team approached their communication aesthetics with remarkable contrast.

Trump, going by what worked in the previous cycle, did not alter his modus operandi. To defeat Hillary Clinton in 2016, he went all in on his strengths, allowing the performative dimensions of the campaign and his outsized personality to eclipse policy. His reality-TV showmanship, paired with the novelty of his campaign and the subsequent difficulty in discerning whether to dismiss it or take it seriously, caused then-candidate Trump to receive outsized attention, boosting his niche campaign’s signal.2
Despite promises of more structure, there is no evidence that the Trump
campaign materially changed this approach from his first to second election cycle.3 Focusing on the “A+” job his administration was doing to address the pandemic, shelling global markets with early-morning
tweetstorms, and muscling through packed stadiums felt like pangs of normalcy (for Trump, at any rate) in this unprecedented election.4,5,6

Biden, on the other hand, used an army of data and culture-driven consultants to keep an ear to the ground, tweaking each element of the campaign as they surfaced new information about what worked online.7
The mutability of the campaign was evident in the shift from a kitschy, constitutional cursive superimposed over Biden in his campaign announcement video, to the swaths of bold color gradients, demarcated
by the Instagram square, blasted out in the days before and after the election.8,9 The aesthetics of Joe and Kamala’s campaign gradually became more progressive, visually and conceptually.

Visually audacious social media messages are distinct from aurally audacious campaign rallies. Trump could pound podiums at North Carolina’s Fayetteville Regional Airport, then a few days later, bloviate identically at Michigan’s Gerald R. Ford International Airport. Digital imagery, however, requires respect for its vessel and context. On Instagram, Biden went with culture-forward imagery and colloquialism; on Facebook, feel-good messages that easily go viral.10,11 Posted on the photo-sharing
platform, this visual plasticity manifests in the image below. His designers, centering naivety, chose a color palette that nauseously vibrates; stretching every other letter and word, they distilled policy preferences into a
grab-bag of design references. His Instagram account, @votejoe, looks like a side project from a Yale-MFA graduate.12 This is a visual idiom of millennials and Gen Z, the app’s core demographic.

It worked. The campaign’s design moves helped mobilize this demographic. Biden won voters under 30 by 25 points.13 The gradients mentioned above, like many of the Biden campaign’s aesthetic choices, are but one reverberation from larger cultural trends happening across the internet (see Nike and Spotify ads, memes, and logos of most companies headquartered in Silicon Valley). And, on Facebook, a three-minute
video of Biden disparaging Trump’s foreign policy decisions was a quick hit for boomers and Generation X.14 Videos of two young people, Shamar and Bryant, giving heartwarming advice to Biden were easy to share for the Facebook-mom bloc.15,16 Form follows function. Social media presents the opportunity to develop as many unique avatars as one could want; Biden’s campaign had dozens of faces.

To write to his voters, Biden, lacking in staccato tweetstorms, again followed a strategy distinct from his opponent’s. In a series of tweets distilling Trump’s alleged policy priorities, we see a familiar locution
from the Republican incumbent:17

On the same day, Biden consolidated his views
into one post:18

Did both presidential candidates plan to express policy perspectives on Twitter that day? Perhaps. Biden did send this tweet out several hours after Trump’s deluge—a measured and responsive contrast to Trump’s impulsive and reactive posting.

Certainly structural factors beyond communications played crucial roles in deciding the election. Trump sentiment was lukewarm going into the vote, due in part to his catastrophic failure to combat the coronavirus and its cascading effects.19 And Biden, a White septuagenarian man who, for most of his political life, held moderate views and loved incrementalism, no doubt had less trouble than Clinton attracting more conservative-leaning voters.20 Aesthetics aren’t everything.

In our age of spectacle, however, presidential success and identity uniquely commingle with campaign aesthetics. In a stay-at-home election cycle, the
internet mediated most campaign communications, and which side of Biden’s identity his team chose to stream through the web—the institutionalist patriot, the newly minted progressive touting an “FDR-sized
presidency,” or the pragmatic dealmaker—proved crucial to defining him for each voting audience.21,22,23 Narratives and facts were determined by the different digital, visual, and performative levers the politicians pulled. Trump, of course, doubled down on his force of personality, pounding on his keyboard or podium.

Biden all but receded into a shimmering web of digital files and gentle signals of staying power, coalescing his divided coalition into a network of
influence that 280-character hammers couldn’t level. His campaign distributed resources through the safest and most targeted channels advantageous in a dysfunctional and dangerous campaign trail. Rather
than thrashing and sparring, Biden listened, and won.

Pierce Henderson is a recent Master in Education graduate at the Harvard Graduate School of Education. Having spent his undergraduate studies investigating contemporary sculpture in the expanded field and unpacking different forms of visual and spatial representation, Pierce comes to Harvard with a background in fine art and design. Now, working as a consultant at the intersection of policy, education, and workforce development, he aims to better understand how the redesign of systems through policy can produce better outcomes for society.