Home > Articles > Germany Drew the Wrong Lessons From Its 1923 Hyperinflation 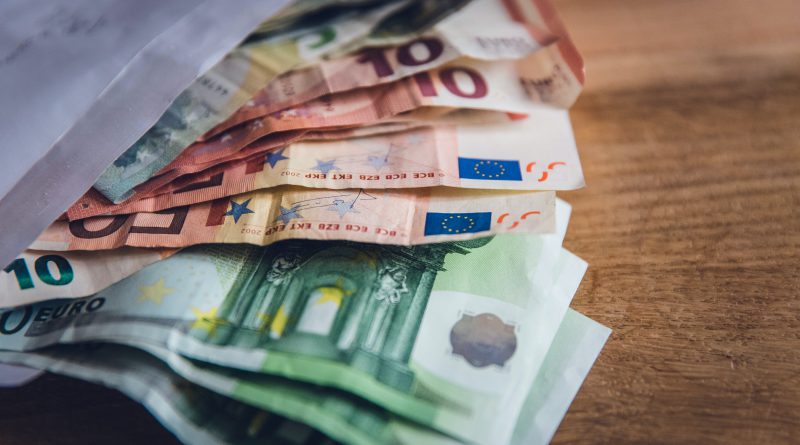 In recent years, the political discourse in Germany has been critical of the European Union and its institutions. This includes harsh criticism of the European Central Bank (ECB) regarding its response to the Euro crisis. One focal point of this criticism related to the ECB’s purchases of government debt, particularly its program of “Outright Monetary Transactions” (OMT), itself a result of former ECB President Mario Draghi’s famous commitment in July 2012 to do “whatever it takes” to save the common currency.

What drives this criticism is fear over one potential outcome of loose monetary policy: inflation. This is rooted in Germany’s history, specifically the 1923 hyperinflation, which is said to have fueled the rise of extremism and eventually Nazism. As a result, Germany adopted the mantra of “never again to hyperinflation” after World War II. But is this historical lesson accurate? The answer requires examining the factors that made voters turn their backs on the Weimar Republic.

To outline the worries of ECB critics, the article “The lost innocence of the ECB” from the German daily Handelsblatt is representative. Professor Sinn, a high-profile German economist, invokes Germany’s experience with hyperinflation between 1914 and 1923 to explain why the monetization of sovereign debt by central banks is such a taboo. This historical experience resulted in a fiercely independent and inflation-phobic postwar German central bank, the Bundesbank, willing to even trigger a European-wide recession to keep inflation in check. Four decades of postwar political stability and economic growth cemented this fondness for a hard currency. As a result, Germany’s precondition for introducing the Euro was that the ECB be based on the same institutional foundation as the Bundesbank, most notably strict independence and a sole focus on price stability.

The ECB’s recent increases in the money supply are seen as a betrayal of the institution’s heritage, transforming the bank into a “money printing machine”. This criticism has manifested itself on several levels. Three prominent German central bankers have stepped down in protest over the ECB’s actions in recent years. Jürgen Stark resigned from his position as the ECB’s chief economist in 2011, criticizing the monetization of sovereign debt on his way out. Axel Weber, head of the Bundesbank at that time and seen as a potential replacement for Jean-Claude Trichet as the head of the ECB, stepped down from his post in 2011 as it became clear that his own hawkish monetary views put him in a minority position within the central bank. In 2019, Sabine Lautenschläger resigned from her position in the ECB’s Executive Board, making her the third German board member in a row to do so. In the technocratic, measured, diplomatic world of central banks, this string of resignations is highly noteworthy.

It is also mostly conservative politicians who are suing the German government in court to force an end to Germany’s participation in the ECB’s OMT program. Apart from criticizing low interest rates and their supposed harm to German savers, they also argue that the ECB oversteps its mandate, burdening its member states with significant risks. On the far right, the Alternative for Germany, known today for its xenophobic and outright fascist message, initially began life as a political party on a platform to promote an “orderly liquidation” of the Eurozone, with Germany returning to the Deutsche Mark.  The “Alternative” in the party’s name was a reference to an alternative to the European common currency.

To understand whether this criticism is justified, it is important to give a closer examination of 1920s Germany from an economic and political view.

The economic and social fallout of Germany’s defeat in World War I led to rising prices, and the most dramatic stage of inflation was reached between January and November 1923. This was fueled by the French occupation of the Ruhr Valley, Germany’s industrial heartland, as compensation for delinquent reparation payments. The German government supported a subsequent general strike across the occupied Ruhr Valley, paid for by printing ever more Reichsmark.

One yardstick to gauge what consequences the 1923 hyperinflation had on people’s sentiments towards the Weimar Republic is the election results between 1919 and 1933. The graph below shows the share of seats held by far-left and far-right parties in the German parliament, the Reichstag. As seats in parliament were allocated based on a system of proportional representation, the changes accurately reflect voter sentiment. 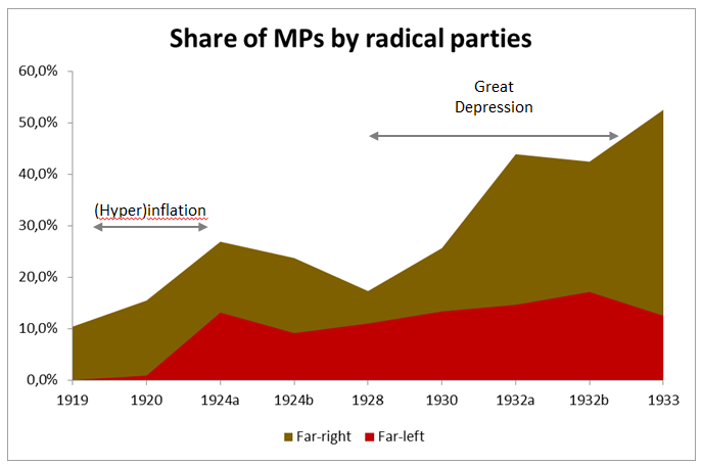 The election in May 1924, the first after the hyperinflation ended, indeed saw anti-democratic parties gain ground, compared to 1920. This trend was almost immediately reversed in the December 1924 election though. It is also striking that the communist KPD seemed to gain disproportionately, compared to the far-right NSDAP and DNVP parties.

At first glance, the changes in industrial output, which showed a steep drop around 1923, and unemployment, which spiked in 1923, are in line with a narrative of voters opting for radical parties in times of economic hardship. However, the effect of hyperinflation on Germany’s production lasted only briefly, with production having recovered by late 1924. In addition, the 1923 hyperinflation did not lead to a lasting radicalization of voters. The 1928 election for instance saw a marked decline in support for radical parties; and the years from 1924 to 1928 are in fact referred to as “The Golden Twenties” in Germany.

Conversely, radical parties clearly increased their vote-share after 1928. This coincides with the Great Depression and years of austerity in Germany. Chancellor Heinrich Brüning implemented increasingly harsh spending cuts and tax hikes. Voters became radicalized, with the most destitute flocking to the communist KPD while the Nazis predominantly hoovered up votes in the middle- and lower-middle class fed up from increasing taxes and worsening public services. Far-right parties thereby gained more votes during the Great Depression in comparison to the far-left, a stark contrast with the aftermath of the 1923 hyperinflation. Another notable feature of this period was that the German central bank engaged in monetary restraint, sticking to the gold standard longer than the United States or Britain at that time. The German central bank effectively “overcompensated” for its previous loose monetary policy and the resulting hyperinflation. Fiscal austerity was exacerbated with high interest rates that stymied consumption and investments even further, fueling the surge in unemployment.

Admittedly, a plethora of factors, including non-economic factors, influence voting decisions, so it is prudent to not assume causality based on these observations, even if some studies indicate that. It is however at least doubtful to see inflation as culprit for the Weimar Republic’s downfall.

Looking at the dying years of the Weimar Republic, there are some parallels to the Euro crisis: During a decade of austerity and structural reforms, Greece experienced stagnant growth and steadily rising debt levels. Similarly, Italy’s government debt has reached gargantuan levels, making the country “too big to save” when push comes to shove. As Italy seems to be disproportionally affected by the COVID-19 outbreak, the Eurozone may be headed for another existential crisis.

When considering the actions of the ECB in the years to come, supporters of monetary restraint should be reminded of the saying that insanity is doing the same thing over and over again, expecting different results. It is high time for Germany to review its own history with both inflation and deflation and heed these lessons in future crises of the Eurozone. 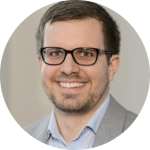 Thomas Hocks is a financial service professional with several years of experience as management consultant in the U.S. and Middle East. Having studied Business and Law in Germany and China, as well as Public Policy at the Harvard Kennedy School, Thomas is interested in the intersection of the public and private sectors.