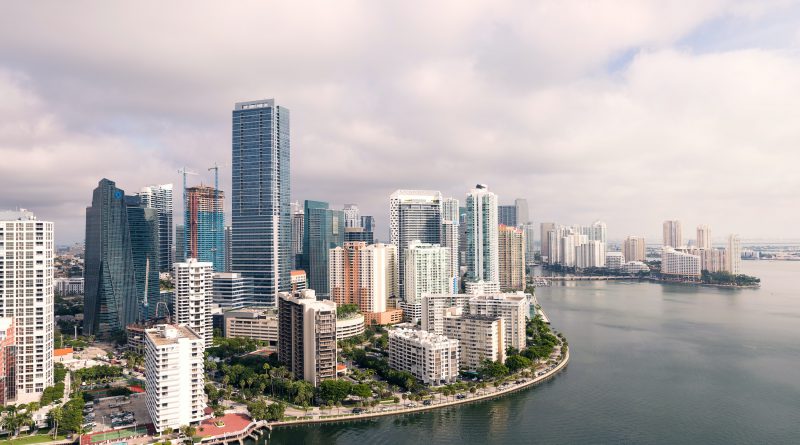 Two miles across the water from Miami’s glamorous beaches and luxury apartments lies what is perhaps the city’s most important but underappreciated waterfront property – the Central District Wastewater Treatment Plant. Donning hardhats and reflective vests, a team of Harvard Kennedy School environmental policy fellows toured this lesser-known side of Miami. The facility is operated by Miami-Dade County’s Water and Sewage Department (WASD), the agency responsible for treating sewage and supplying water for 2.3 million residents. After the tour, the fellows shed the vests and returned to the city, crossing the bridge back over Biscayne Bay. Inspired by conversations and first-hand experiences in Miami, the team reflected on the daunting challenges facing the city.

This article summarizes observations and recommendations from a week of field research with public officials, artists, architects, and researchers grappling with the climate crisis and what it means for Miami, with a focus on innovative approaches for infrastructure resilience.

Much of Miami-Dade County’s critical, aging infrastructure is vulnerable to climate change and associated sea level rise. Because of its exposed location on Virginia Key, the County’s wastewater treatment plant is particularly susceptible. The incidence and magnitude of sewage spills and equipment failures are worsened by rising sea levels and more frequent, more intense storms. During the aftermath of Hurricane Irma in 2017, WASD’s facilities released six million gallons of sewage into Biscayne Bay, posing a public health risk.[1]

This was not the first time the plant discharged waste in violation of the U.S. Clean Water Act (CWA). In total, Miami-Dade’s three wastewater treatment plants released over 50 million gallons of waste into nearby waters between 2007 and 2012.[2] In 2013, the County reached a CWA settlement with the U.S. Environmental Protection Agency (EPA) to resolve sewage violations and improve failing infrastructure. At the time, environmental watchdogs like Biscayne Bay Waterkeeper (now Miami Waterkeeper) raised concerns the settlement failed to “account for sea level rise and climate impacts that will, if not appropriately accounted for, cause major failures in the sewage collection and treatment system during its useful life.”[3]

In the face of climate change, WASD weighed options to protect critical coastal infrastructure. It could do nothing. It could relocate the wastewater plant to a non-coastal location, at a high price. Or it could make incremental capital improvements to existing assets.[4]  WASD chose to strengthen infrastructure via ongoing capital improvements over multiple phases. Part of the budget funds adaptation projects to minimize risk, such as raising electrical panels or elevating critical chlorine facilities.

Unfortunately, the Virginia Key wastewater plant is not the only at-risk site. Miami tops the global list of cities with the most assets exposed to coastal flooding, both in terms of present exposure and expected future exposure.[5] Miami had $416 billion in exposed assets as of 2011. This figure skyrockets to a projected $3.513 trillion by 2070 as a result of climate change and coastal flooding.[6] Add in the cost of safeguarding those assets and the sheer quantity of exposed assets around the U.S. and the world, and the scope of this problem begins to take shape.

Incremental infrastructure investments are an improvement, but difficult questions remain. Climate change may cause between 2.5 and 6.75 feet of sea level rise in Miami by 2100.[7]  Some experts project even higher levels, including Professor Hal Wanless, a University of Miami geological scientist who shared the urgent message of his research with the Fellows.

It’s not just sea level rise or tidal flooding on sunny days that has policy makers worried.  Miami also needs to plan for increased frequency and intensity of coastal storms. The loss of coastal mangroves has eroded a natural buffer for storms. Organizations like the Urban Paradise Guild work to restore Miami’s natural landscapes and protect against detrimental impacts of storm surge.

Saltwater intrusion is another threat. As the freshwater Everglades mix with encroaching saltwater, the intrusion of oceanwater will devastate biodiversity and damage a main source of drinking water. Saltwater spreading underground also undermines the mostly gravity-operated sewage system.

Other questions stem from possible population changes. Daily flooding and worsening storms may make living in Miami untenable, driving mass migration out of the city. How should county government think about sizing its future taxpayer base, modeling useful asset life, or investing capital? Might a new treatment plant be designed to serve a smaller city?

Policy makers must view Miami’s infrastructure challenges through the lens of racial equity and economic justice. If the time comes when the city must move its residents, how will policy makers address low-income and more vulnerable populations who lack the resources to relocate on their own? Will public funding be available to help people relocate to more secure locations? Not everyone will leave Miami. Unable or unwilling to move away from homes, families, and cultural centers, those who remain will need critical resources like clean drinking water, emergency response, and infrastructure.

Given overlapping risks, the timeframe is a key policy question. Should capital improvements to critical infrastructure prepare for climate impacts expected in five years, or fifty? How much should the city invest in plants that become less salvageable over time? Should investments focus on relocating infrastructure, despite the higher costs? And how much time would such a move buy Miami, if projections about increasing salinity and disruption of drinking water supplies hold true?

These are the difficult questions facing Miami’s decision makers as they balance their obligation to serve current residents with the need to prepare for a different future.

Where does Miami, or any other city, go from here? In the coming decades, climate change will increase risk exposure for every dimension of a modern city, from its population and economic activities to infrastructure and resources (like water or energy). Today’s decision makers must plan for future impacts so that critical infrastructure can serve tomorrow’s population. There are no easy answers. However, delay in discussing these issues increases the risk that Miami and similar cities will fail to serve their populations as climate change worsens.

Ana Samoylova’s photography studio is in Miami Beach, north of Virginia Key. The fellows met with Samoylova to discuss her work, which captures human interactions with sea level rise. Her exhibit and book, FloodZone, exemplifies how Miami’s arts community can help shape the narrative about climate resiliency.

Climate change touches every policy issue imaginable, from racial equity and economic justice to immigration and healthcare. In this new reality, decision makers shape the region’s ability to respond to critical needs like wastewater treatment, housing, roadways, healthcare facilities, electricity, and more. Expanding the notion of who is at the table ensures a wider range of voices, strengthening links between infrastructure improvements and community needs. Policy makers must incorporate input from those who understand the concerns of the city’s disadvantaged. Doing so would help address issues of environmental and economic justice in infrastructure planning.

Addressing such a daunting problem requires a coordinated strategy, drawing expertise from a diverse array of stakeholders. Cities facing similar challenges should start by taking the following actions:

Miami has taken important first steps on financing. The Miami Forever Bond invests $400 million across five categories, including sea-level rise and flood prevention.[8] The first tranche of the bond, which is financed through property taxes, includes projects like raising streets and installing stormwater pumps to mitigate flooding. The city is testing out which projects work best and will incorporate lessons learned into later financing tranches.

The Forever Bond has received attention from around the world. Former UN Secretary General Ban Ki-moon co-authored a New York Times piece with Miami Mayor Francis Suarez about the Forever Bond’s role in climate adaptation. Ban Ki-moon and Mayor Suarez expressed hope that “Miami’s resilience bond will become a catalyst for greater private sector investment and innovation in climate adaptation. We also hope it will spur similar initiatives in coastal cities around the globe.”[9]

Disaster Planning for the Future

Back on Virginia Key, County commissioners grappled with a proposed fee hike to cover much-needed upgrades at the wastewater treatment plant. At a public hearing, Miami Waterkeeper Rachel Silverstein aptly noted “Miami-Dade County is currently in the midst—and has been for quite some time—of a sewage infrastructure crisis.”[10] With much more to do and not enough funds, South Florida faces limited options.

Should some of the worst predictions for sea-level rise and increased storm activity hold true, policy measures like the Forever Bond will be necessary but insufficient to address Miami’s future. While the measure has increased Miami’s bond ratings, experts have expressed concerns about whether this encourages imprudent investment into a drowning city. Would it be more responsible for Miami to start investing less, not more, in its infrastructure?

This raises a tough moral question: at what point is it more prudent for Miami to pursue managed retreat, or the intentional movement of populations away from vulnerable locations, instead of investing more in capital projects destined for worsening climate impacts? If managed retreat is a likely scenario, how can policy makers work with communicators and other members of the public to ensure issues like racial equity and economic justice aren’t ignored as a new future starts to unfold?

For policy makers in Miami, these are decisions that need to be discussed now, not decades from now, if the city is to prepare itself for the realities to come.

Katie Segal focuses on energy and climate policy and is a 2020 MPP candidate at Harvard Kennedy School.

Michelle Chang specializes in sustainable technology and infrastructure investing and is a 2019 MPP graduate of Harvard Kennedy School.

In addition to the lead authors, Lia Cattaneo, Martina Müller, Vernice Victorio, and Jenny Zeng, all Louis and Gabrielle Bacon Environmental Leadership Fellows, also contributed to this article. The authors would like to thank Rand Wentworth at Harvard Kennedy School and Jesse Keenan at Harvard Graduate School of Design for their support, as well as Rosetta Elkin at the Harvard Graduate School of Design and Joanna Lombard at the University of Miami. We would also like to thank the Center for Public Leadership for their generous support of this experience, and to the people who welcomed us into their studios, offices, and parks.

Photo by Ryan Parker on Unsplash

[1] Mufson, Steven and Dennis, Brady. “In Irma’s wake, millions of gallons of sewage and wastewater are bubbling up across Florida,” The Washington Post, 15 Sept. 2017. https://www.washingtonpost.com/news/energy-environment/wp/2017/09/15/in-irmas-wake-millions-of-gallons-of-sewage-and-wastewater-are-bubbling-up-across-florida/