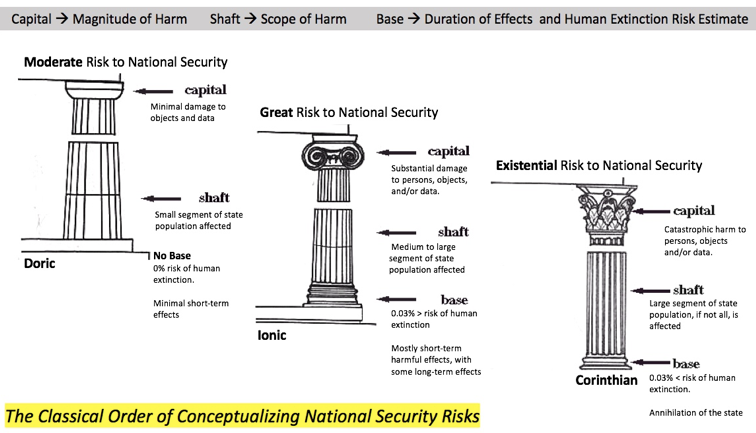 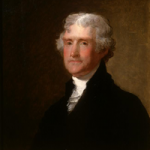 Thomas Jefferson was fascinated by the elegant symmetry and proportions of Andrea Palladio’s Greek order of columns. In fact, Palladio’s style inspired Jefferson’s design of Virginia’s State Capitol and led him to influence “the design of the U.S. Capitol and the White House.” It’s time we revisit the wisdom of this architectural design but apply it to constructing a common model for national security risks.[1]

This article offers the national security community a new model for conceptualizing risk by combining a Greek order with the Global Catastrophic Risks Survey by Oxford University. Oxford’s Future of Humanity Institute surveyed participants about disasters risking human extinction before 2100 and used the median scores to create this risk assessment.[2]

The logic behind the column concept is this:  The plain-looking Doric column represents moderate risks to national security, the Ionic column signifies great risks, and the intricate Corinthian column represents existential risks; a subset of global catastrophic risks. It’s an ascending hierarchy of security risks that corresponds with the three main design points to column – the capital (head), shaft (middle), and base. Each point represents a threat assessment attribute. The capital represents the type of physical, kinetic harm and non-kinetic harm produced to persons, data, and/or objects, with the severest threats having the most intricate capital design – the Corinthian capital. Next, the shaft signifies the amount of harm, and the base molding represents the temporal effects and human extinction risk score from Oxford’s Survey.

In exploring what constitutes an existential risk – something that threatens the extinction of intelligent life – we evaluate the significance of an electromagnetic pulse (EMP) threat both naturally occurring and manmade. An EMP weapon is an energy weapon that can either be activated by a nuclear detonation, or a coordinated directed-energy strike. The Department of Homeland Security classified EMP threats as “hard problems,” and “low probability/high consequence scenarios that challenge effective policymaking.” A shortcoming of DHS’ analysis is that it misapprehends the relationship between existential threats and probability. This creative model can be of help in distinguishing between different types of risk. 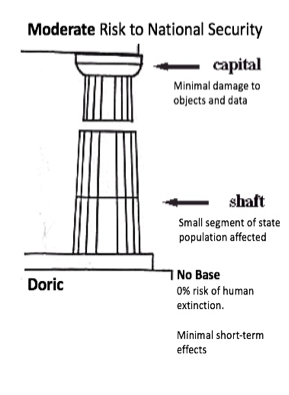 The Doric column represents moderate risk to national security. It features a plain capital which signifies minimal damage to physical objects and data. Next, the shaft denotes that a small portion of the population would likely be affected. In terms of the temporal effects, moderate risks to national security would yield primarily immediate, short-term harmful effects. Lastly, the absence of a base on the Doric column aptly represents 0 percent risk of human extinction based on the Survey. An example of moderate risk is intellectual property theft from academic institutions, like the Iranian Mabna Institute’s four-year effort targeting universities to steal “more than 31 terabytes of academic data and intellectual property[.]” 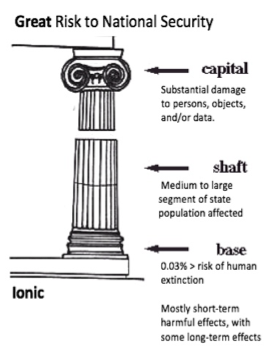 The Ionic column features a decorative scroll-style capital and base to signify great risk to national security. The capital represents substantial damage to persons, objects, or data. The common law interpretation of substantial risk generally refers to “risk of such a nature and degree that to disregard it constitutes a gross deviation from the standard of care that a reasonable person would exercise in such a situation.” As the D.C. Circuit court held in United States v. Singleton, (1999), substantial harm refers to “a direct relationship between the offense and a risk of violence.” The slightly bowed outward appearance of the shaft indicates that a medium to large segment of the state’s population would be affected. In turn, this category would yield a mix of short-term and long-term harmful effects. An example of a great risk is the malicious cyber operation that targeted the U.S. Office of Personnel Management where the security records of 21.5 million government employees and contractors were compromised. Lastly, the Ionic base has a square-like molding set at less than a 0.03 percent risk of human extinction. Why? Because the lowest-scoring existential threat from the Survey – a terrorist-sponsored nuclear attack – was estimated at 0.03 percent. Moreover, because nuclear threats jeopardize the state’s existence, it falls under the catastrophic Corinthian category. 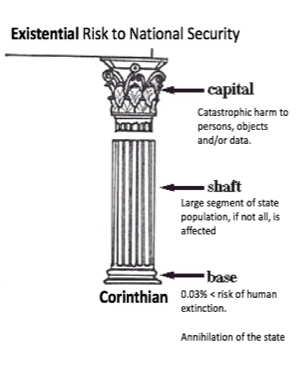 The Corinthian column. Its intricately designed capital represents catastrophic damage to persons, objects, or data. Catastrophic means extreme high-level destruction, disruption of critical services, and a significant loss of the population. Having the slenderest shaft, this column signifies that the state’s entire population would more than likely be gravely impacted, for as Nick Bostrom explains, this type of catastrophic risk threatens “the premature extinction of Earth-originating intelligent life[.]” Next, the rounded base molding is calibrated at greater than 0.03 percent risk of human extinction. Other examples of existential threats from the Survey included civil wars, pandemics, and rogue super intelligent artificial intelligence. While probability can help inform how we evaluate national security threats in general, it is not as helpful for existential threats. For instance, DHS could assign a low probability score (i.e., a characteristic of risk) to the threat of a nuclear EMP war between the U.S. and Iran, however, it should not diminish the existential concerns inherent in any type of nuclear conflict – it undermines the nation’s existence. Precision of concept in risk modeling helps reinforce precision of thought in understanding how to mitigate subjective biases.

So, are EMPs existential threats?

Taking the capital and shaft into consideration, EMPs have a tremendous destructive force capacity that could impede the entire nation’s access to basic needs like food, water and electricity: “everything, would go down with one weapon,” warns Dr. Peter V. Pry, the former Chief of Staff of the U.S. Congressional EMP Commission.

For the base, POLITICO writes that despite President Donald Trump’s Executive Order on EMPs, the “utility industry has resisted hardening the grid to EMP attacks because of the high cost” estimated in the billions of dollars, to protect against what they consider “an unlikely threat.” On the other hand, the National Research Council reports that the harm from a natural EMP “might be between $1 trillion and $2 trillion in the first year alone, with full recovery taking an estimated four to 10 years[.]”  As the likelihood of a natural EMP from a solar superstorm like the 1859 Carrington superstorm increases 12% per decade, and as states like North Korea and Iran demonstrate increased interest in EMP technology, this threat measures up to the Corinthian column.

Granted, no risk evaluation model is a perfect work of art

However, the beauty of this Greek order is that its symmetry and proportions are accessible modeling concepts. Hopefully it will afford policymakers ‘refreshed eyes’ to survey the landscape of national security threats. 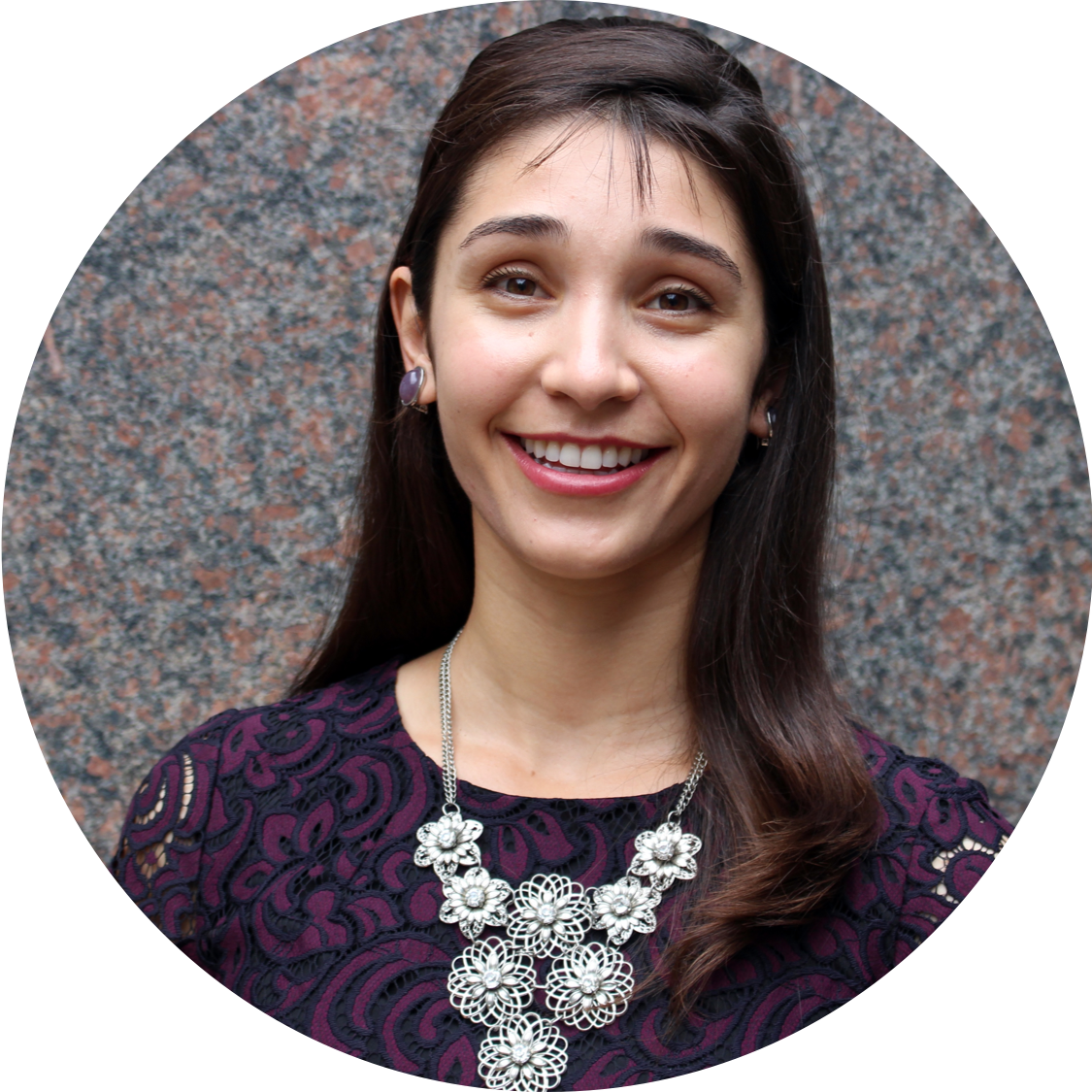 J. ‘Zhanna’ Malekos Smith, J.D., served as a captain in the U.S. Air Force Judge Advocate General’s Corps and is a delegate in Stanford University’s U.S.-Russia Forum. She received a B.A. from Wellesley College, an M.A. and A.K.C. from King’s College London, Department of War Studies, and J.D. from the University of California, Davis School of Law. Malekos Smith has held fellowships with the Madeleine K. Albright Institute for Global Affairs, the Belfer Center’s Cyber Security Project at the Harvard Kennedy School, and Duke University Law School as the Everett Cyber Scholar.