Home > Articles > #EnaZeda: A Women’s Revolution of our Bodies for our Bodies 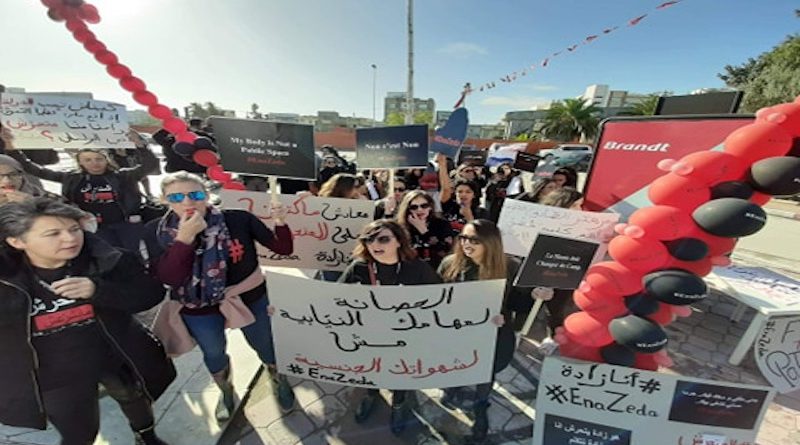 The 2011 Tunisian revolution that ousted a dictator and security state rule, did not only change the country’s political system, but it impacted all aspects of Tunisian life, especially for women. The most recent national election, in October 2019, brought a new independent President to power. Met with celebration, Tunisians appeared eager to start a new chapter in history and began by cleaning the streets and painting in public spaces. This is symbolic of a deep desire to belong, to appropriate public space and to break the myth of being subject. But unfortunately, the reality is much messier.

Around the date of the election, a high-school student took photos of a man who followed her in his car and made inappropriate sexual gestures. She posted the photos in a Facebook group to denounce the behavior. However, this was not just another example of sexual harassment – the man in the photos is a newly-elected Member of Parliament (MP). The story went viral, bringing up a fundamental conflict involving power and patriarchy.

The notion of equality ensures that there is no discrimination, especially on the basis of gender. Sexual harassment embodies the power dynamic of men feeling entitled to other more vulnerable persons’ bodies. In the case mentioned above, that the person perpetrating sexual harassment is an MP is a deeply ethical issue for the democracy that Tunisia is trying to build.

Thus, the revolution that swept through Tunisia in 2011 must carry on. Otherwise, as American feminist Kate Millet writes in her book Sexual Politics, “Dictatorship returns again and again to a more violent patriarch.” Despite the country’s political system, women still remain bound by the oldest oppressive regime: the patriarchy.

More than 21,000 people have joined the #EnaZeda group, created by the feminist organization Aswat Nisaa in support of the high school sexual harassment victim. Her story sparked a wave of solidarity that resists invisibility. Since then, thousands of testimonies have been shared. This act of speaking up was a liberating catharsis for the victims and survivors of sexual violence, paving the way for others to find the courage to speak up. They told their stories in words we all understand and in a language that humanizes us. They spoke to our hearts; they mobilized our emotions, they made us uncomfortable. They spoke with anger in a world that has always considered women’s anger an inappropriate reaction to injustice, a “madness.” They sparked a movement.

This is what happens when women grab the mic. For years, feminists have advocated on behalf of victims of violence. Yet, we never saw the victims themselves. Why are women speaking now, and how has a hashtag and a Facebook group mobilized a sense of urgency, while many costly awareness-raising campaigns have never had such impact?

Many reasons explain the trigger of the movement; most prominent is that women are owning their stories. For years, public institutions and women’s rights groups have treated women victims of violence as service receivers, beneficiaries or social cases, stripping them of their agency. For years, feminist institutions have conceptualized social problems, including gender-based violence and sexual harassment, as problems that could be solved by technical legal solutions and by gathering experts’ best-practices. But these solutions cannot match the enormous role that social media plays in creating a space for solidarity and cannot replace a collective political action by an organized and active citizenry.

However, we cannot reduce the #EnaZeda Facebook group to a safe space. It is a brave space that is radically repositioning female bodies at the center of the conversation. The stories are overwhelming and painful. We must lean into this discomfort.

The stories on the Facebook page confront us with a difficult question: Do women really own their bodies?

Women’s bodies, the very intimate spaces they live in are mocked, controlled, sexualized, abused, raped, terrorized. Women’s bodies become a temple of guilt, shame, fear and anxiety. Sexual violence and abuse have nothing to do with desire and arousal. It reflects the perpetrator’s need to dominate and control the victim. We need a body’s revolution, and this revolution must happen in the three main patriarchal institutions: The family, the society and the State.

In many shared stories, most sexual assaults on children happened at home with family members. In conservative societies like Tunisia, family values have long been used as an argument to prevent women and the LGBTQ community from claiming their rights. However, we must ask conservatives to consider their notions of family when they see the atrocities that happen in their homes. As Kate Millet says, “family is the patriarchy’s chief institution.” It is at home when girls are taught that their bodies are sin and the source of the world’s problem. It is where boys learn that masculinity is not real unless it is toxic. Family controls us, educates us and prepares us to obey other larger authorities. Women internalize the injustice they live at home and all the narratives about them and their bodies. Thus, they start navigating society with fear.

With regard to the second patriarchal institution, public spaces, straight men in Tunisia make it clear that women follow their rules. For example, public transportation and places for leisure are rarely made accommodating or secure for females. Women then start to change their behaviors to accommodate the space as it currently stands. Women were taught to believe that they are wrong when they claim their space and their rights.

Therefore, if women are oppressed at home and in the street, why not ask the State to protect them? Anne-Marie Slaughter asserts that “the oldest and simplest justification for government as protector is: protecting citizens from violence.” According to Sonia Ben Miled, Communications Officer at Aswat Nisaa, a Tunisian NGO involved in the #EnaZeda campaign, “besides having to deal with the trauma caused by sexual harassment or sexual violence, victims are subject to real issues in order to fight for their rights. The costly and time-consuming legal procedures can prevent them from filing a complaint.” And as Martin Luther King Jr. said “justice delayed is justice denied”

The family, the society and the state, with the support of political Islam, have built an entire vision of society that subjugates women. These are the main obstacles to women’s and gender diverse people’s liberation. Unless we tackle gender-based violence from a power perspective, we will not progress as a society.

Sexual harassment and sexual violence with all that they symbolize must stop. In order to eradicate them, we must tackle the roots of the aforementioned institutions. Families need to unlearn the gender discrimination that they impose on children. The widespread culture of silence that helps perpetrators carry on abusing family members should be dealt with a firm conversation about boundaries. Families must learn that all bodies are equally sacred and should be protected against abuse. Lastly, families should teach children to report abuse, to say no, and to not feel guilty in doing so.

The same way Tunisian society collectively acted to rid itself of corruption, it also must rid itself of the corruption of values and violence that follows more than half of its citizens.  There is a long way to go to unlearn the reactionary collective shaming of victims and a long way to go to learn new values of respect, equality, and compassion. The media has a huge role to play in this, and more control by specialized independent authorities should be put in place to monitor messages that encourage sexual violence and harassment or that protect perpetrators. Collective awareness must happen as well.

Finally, the State should work to protect all citizens. Preexisting laws should be enforced by allocating sufficient funding and by ensuring that procedures are free and accessible to everyone. Having a centralized point to report sexual harassment and violence is a necessity to obtain justice and restore trust. It is important that the political will exists to hold accountable anyone in power who allows himself to use it.

#EnaZeda is a cry of despair from those who couldn’t speak before. Many circumstances converged for it to happen and its momentum should have an irreversible outcome for bodies and souls to be healed. 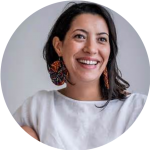 Ikram Ben Said is a feminist Activist and Founder of Aswat Nisaa, a Tunisian NGO promoting women’s active participation in the political and policy-making spheres and advocating for gender sensitive public policies. 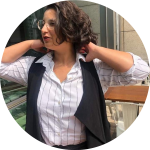 Samah Krichah is a feminist and MSc in Women Peace and Security at London School of Economics and Political Science.