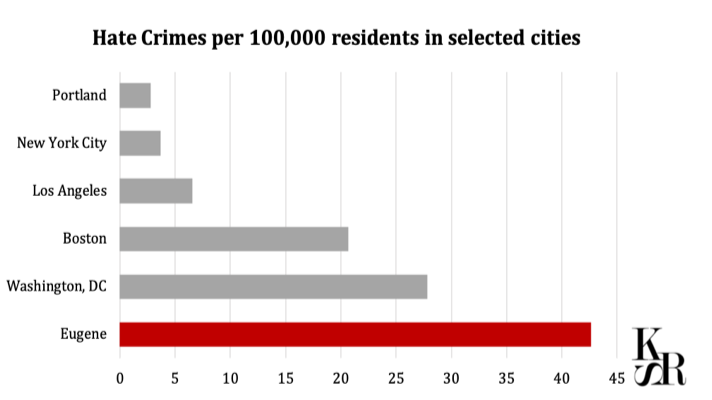 BY STEFAN NORGAARD AND BRADY ROBERTS

Despite its reputation as a liberal college town, more political-extremist individuals and entities call Eugene, Oregon home than any other United States city as measured by a compilation of official data on crime in the United States published by the FBI. Eugene is victimized by 42 hate crimes per 100,000 residents, per year, in a state with the highest rates of self-reported hate crimes in the country. These metrics indicate the presence of organized white nationalists targeting a small minority community and deeper structural issues including white nationalist ideologies. 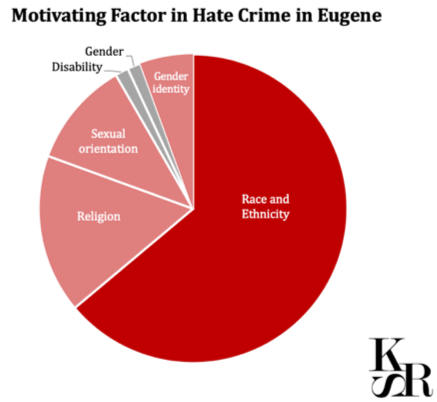 As Harvard Kennedy School Professors Mayne and De Jong argue in their paper “State Capabilities” (under review), “wicked problems” like white nationalism are structural in nature and difficult to define. We partnered with the Oregon-based Western States Center to break down the phenomenon into sub-problem “deconstructions” and proposed recommendations for quick adaptation, as well as long-term goals and outcomes of our interventions. The problem deconstructions include:

Working iteratively and collaboratively with the progressive democracy non-profit Western States Center and the City of Eugene’s Office of Human Rights and Neighborhood Involvement (HRNI), we crafted an implementation framework and specific recommendations about how the city could respond to white nationalism.

We view white nationalism as a social disease and developed a framework centered on a public health response:

Undergirding this framework is the idea of primary care: a renewed commitment to the work of racial equity through constant assessment, analysis, and conversation between institutions. 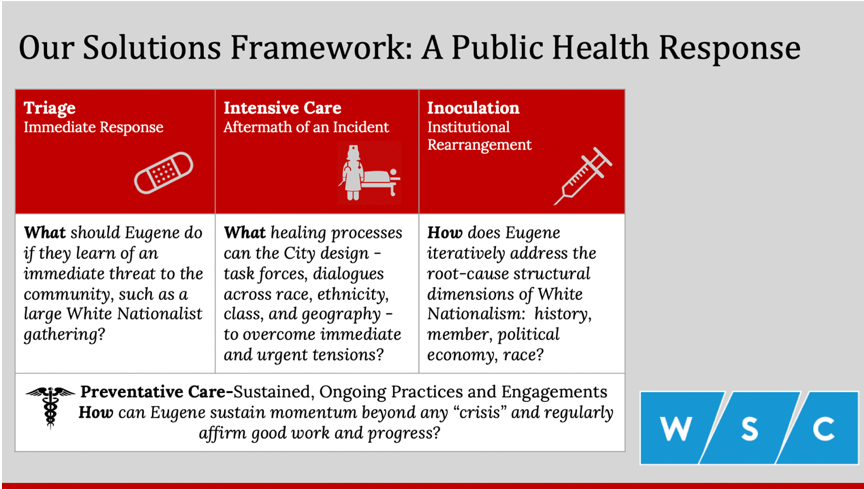 With a problem of the scope and size of contemporary white nationalism, no one solution will ever serve as a “silver bullet.”  However, a variety of interventions that are asset-based, context-specific, and collaboratively honed have the potential to change the narrative around white nationalism in Eugene.  Our ultimate vision guiding these recommendations is as follows: Eugene can serve as a regional and nationwide leader in anti-racist reporting, activism, and broad-based democratic engagement.

Through our research process, we ultimately proposed a six-step sequence of recommendations for racial equity and anti-hate work in Eugene and Lane County.  The recommendations are: 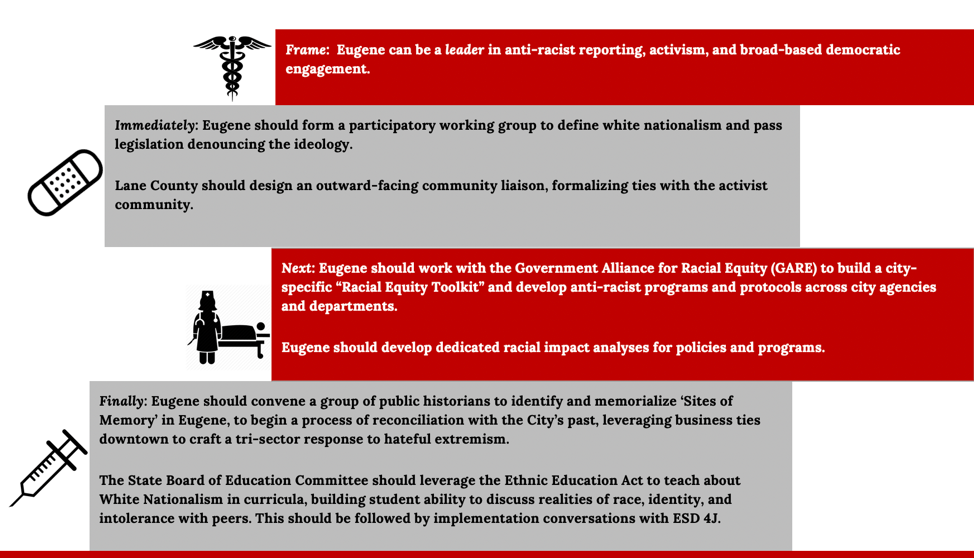 Racial ideologies and histories are deeply rooted in Eugene and elsewhere, and have been complexly interwoven with constructs of race and class over time.  We are far from the first to propose anti-racist work in Eugene, and will surely be followed by countless others. But our approach focuses on city employees and elected officials as potential conveners and problem-solvers. The complex work of democratic inclusion at the city-level necessitates tradeoffs and is not easy, financially and politically. Our recommendations, at their absolute best, will only continue to bolster a much longer term process of recognition, reconciliation, and healing across difference in and around Eugene.  We recommend that Eugene, Lane County, and Western States Center, boldly and courageously, bring people together with an aim to do so. 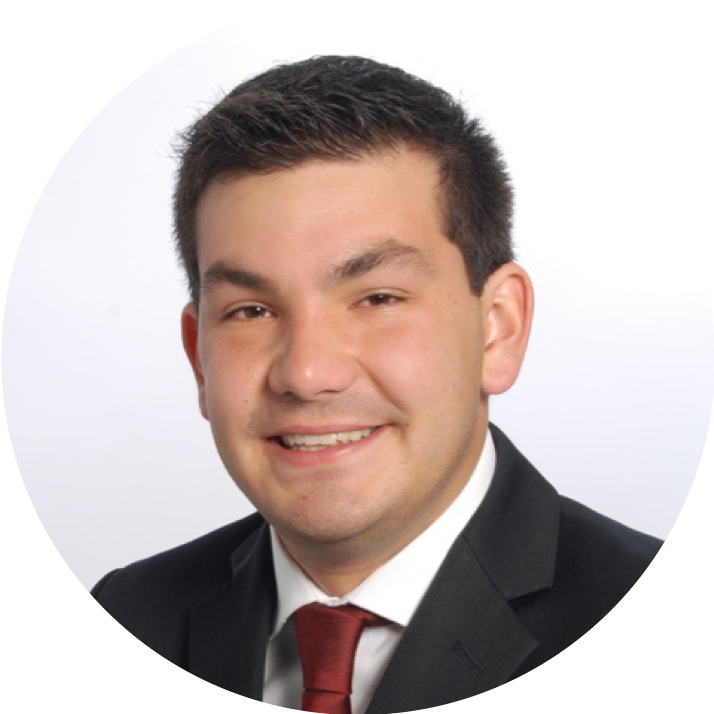 Stefan Norgaard is a recent graduate of the master in public policy program at the John F. Kennedy School of Government at Harvard University. He currently works as a Research Fellow with the Bloomberg Harvard City Leadership Initiative and will pursue a PhD in Urban Planning at Columbia University this Fall. Formerly, Stefan served as a managing editor for the Kennedy School Review and before HKS worked with the Ford Foundation’s Equitable Development team and as a fellow with the NYC Department of Transportation. He is passionate about good governance, participatory democratic practice, and development that is equal and just. 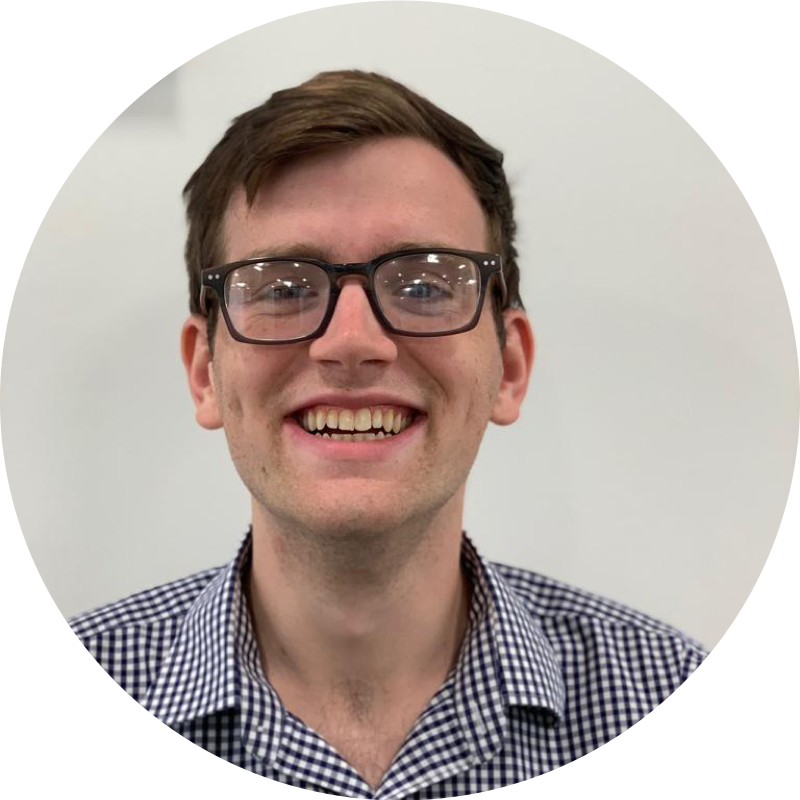 Brady Roberts is a recent graduate of the master in public policy program at the John F. Kennedy School of Government at Harvard University. Last summer, he was a Dukakis Fellow in the State of Pennsylvania, working with Governor Wolf on the State’s system of public higher education. Prior to attending HKS, he worked as a guidance counselor in rural Pennsylvania and as a consultant. He is passionate about building an America where good jobs, good government, and good infrastructure exist.