Home > 2018 Issue > An Undelivered Package: Postal Reform’s Failure in the 115th Congress and What It Says about American Democracy 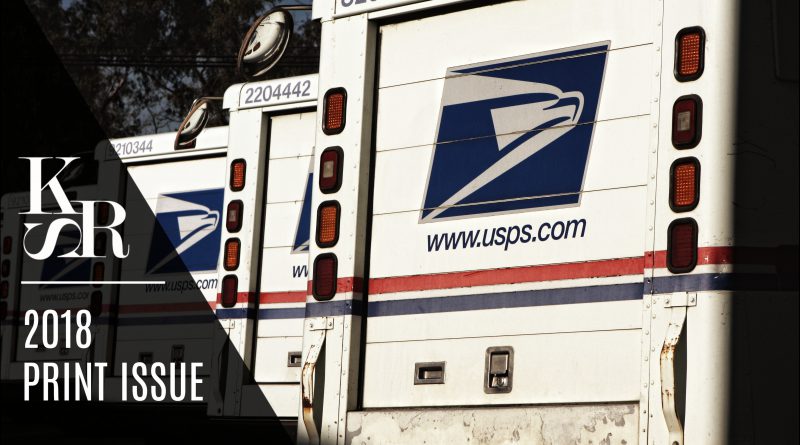 Imagine there were a bipartisan agreement in Congress for a package of critical reforms to a politically important government agency. Say that the chief sponsors of the legislation enacting those reforms included both the chairman of the conservative House Freedom Caucus[1] and a prominent member of the Congressional Progressive Caucus.[2] Let’s also say that the reforms had broad stakeholder support from both business groups[3] and labor unions.[4] Now suppose that the legislation overwhelmingly passed its committee of jurisdiction by voice vote.[5] One would think that this proposal would be on the fast track to becoming law.

In 2017, Congress was on the precipice of passing legislation to reform the US Postal Service and provide flexibility to its pension system. These proposals were widely viewed as essential for the agency to maintain its future competitiveness and solvency.

However, a series of extenuating circumstances and unforeseen developments have prevented legislative progress on postal reform. These difficulties are not unique to the issue of postal reform. Rather, they are paradigmatic of the political impasses occurring in all corners of Congress. Legislation today too often fails without a dedicated “champion” willing and able to guide it through the legislative process, and even then, common sense and deadline-accountable legislation with material consequences can be crowded out by the hyper-salience of partisan priorities. The insights gleaned from postal reform’s unsuccessful process are relevant to Congress’s inability to pass other legislative reforms in areas such as health care and infrastructure.

The Case for Action

There are several reasons that the functioning of the US Postal Service constitutes a pressing and salient matter for Congress. First, the US Postal Service is one of the agencies explicitly mandated by the US Constitution. This means that Congress cannot eliminate the agency or abdicate federal responsibility for its performance or finances without a constitutional amendment, which is inconceivable. Second, the US Postal Service is the backbone of the mailing industry, which is a major component of the US economy. The agency estimated in 2013 that the US mailing industry accounted for 8.4 million jobs and $1.3 trillion in revenue.[6] Third, consumer trends away from brick-and-mortar retail and toward e-commerce will only increase the importance of the US Postal Service in future years. Companies will increasingly rely on the agency’s services in order to ship their products to customers.

Thus, the US Postal Service will remain on Congress’s radar for the foreseeable future. But to understand the growing urgency for Congress to act on postal reform, one must first understand the context underlying the proposals. In December 2006, during the lame-duck session that directly preceded the Democratic takeover of both chambers of Congress, congressional Republicans approved the Postal Accountability and Enhancement Act.[7]

The Act made two key changes that would spur Congress’s later postal reform actions. First, the Act required that the US Postal Service pre-fund its retiree benefits in order to pay down the agency’s unfunded obligations. This provision included a pre-funding payment schedule over the bill’s first ten years, which ranged between $5.4 billion and $5.8 billion annually.

Second, the Act required that the US Postal Regulatory Commission, the body that oversees the US Postal Service’s rate-setting practices, conduct a rate review ten years following enactment. The review was thus set to commence in December 2016 and was expected to result in shipping price increases for market-dominant products (those for which the US Postal Service has a monopoly), including first-class mail, periodicals, and media mail.

Shortly following the enactment of the Postal Accountability and Enhancement Act, there occurred a noticeable drop in mail volume, which currently stands below 2007 levels. For example, while the US Postal Service reported total mail volume at 212.2 billion units in 2007, that volume fell to 154.3 billion units by 2016.[8]

This slowdown in mail volume has impacted the US Postal Service’s ability to remain financially solvent. In June 2011, the US Postal Service announced that it would not contribute its scheduled payment to the Postal Service Retiree Health Benefits Fund, in violation of the 2006 law.[9] The agency contended that such a payment was unnecessary. Officials were also concerned about a death spiral, in which the reduction in funds would force the agency to either reduce available services or raise rates on postal products, which would reduce demand and revenue that would lead to future cuts, and so on.

Beginning in 2015, as concerns mounted and the odds increased that the scheduled December 2016 Postal Regulatory Rate Review would result in even higher postal rates, Congress began to ramp up their focus on postal-reform legislation. In October 2015, Tom Carper (D-DE), then-ranking member of the Senate Homeland Security and Government Affairs Committee, introduced the Improving Postal Operations, Service, and Transparency Act of 2015.[10] In July 2016, the House Oversight and Government Reform Committee approved its postal-reform bills by a voice vote.[11] The legislation had the support of the chairmen and ranking members of both the full committee and the subcommittee that oversaw the US Postal Service.

The House’s proposals would, among many things, redesign postal retiree benefits largely through enrolling retirees in Medicare Part A and B and rescheduling required benefits payments, amend the Postal Board of Governors system, establish a chief innovation officer in order to oversee the agency’s new postal and non-postal products, and permit the Postal Service Retiree Health Benefits Fund to diversify its investments.

Despite the impending December 2016 deadline and the existence of viable legislative proposals, Congress ultimately failed to enact postal reform in 2016 for several reasons. Most notably, the November 2016 elections drastically reduced Congress’s time in session and diminished the appetite of members to take votes that were not politically necessary. In particular, Senate Homeland Security and Government Affairs Committee Chairman Ron Johnson (R-WI) was engaged in a tough reelection campaign and did not make postal reform a priority for his committee. Following the November 2016 elections, Congress held a relatively brief lame-duck session that focused on several short-term measures to set the stage for the incoming Trump administration.

Moreover, senators Heidi Heitkamp (D-ND) and Jerry Moran (R-KS) led a bipartisan group of 27 senators in expressing concerns with the bill’s lack of service improvements.[12] While this group’s formation was by no means a death knell for the proposal, it further reduced the likelihood of the full House considering the bill as the legislation was no longer a sure thing to pass within the condensed lame-duck session.

As a result of the aforementioned headwinds, the House failed to take up the House Oversight and Government Reform Committee’s bill before the 114th Congress adjourned.

Congress should have swiftly enacted some form of postal reform in 2017. Chairman Johnson was successfully reelected in 2016 and would not need to face reelection until 2022. The House Oversight and Government Reform Committee had already established a blueprint for a politically viable proposal in the previous Congress that would allow it to hit the ground running.

Of note, the proposal’s supporters smartly decided to separate the reform package into two bills in order to game the Congressional Budget Office scoring,[14] which might have otherwise torpedoed the proposal. Postal reform appeared to now have a viable path toward passage.

However, a slew of unforeseen events and circumstances ultimately derailed the legislation. Shortly after the House Oversight and Government Reform Committee approved its postal-reform bills, Chairman Jason Chaffetz (R-UT) unexpectedly announced that he would resign from Congress that June.[15] Chairman Chaffetz was the primary shepherd of the legislation, and his absence from Congress left the bills without a clear champion.

Furthermore, the new House Oversight and Government Reform Committee Chairman, Trey Gowdy (R-SC), had no policy experience on postal matters and was not actively involved in the crafting of these proposals. Chairman Gowdy, a former federal prosecutor, made his reputation chairing the House Benghazi Committee and has primarily focused on the House Oversight and Government Reform Committee’s investigative work during his tenure.

To further complicate matters, President Trump recently tweeted about the issue, which could further hamper the prospects for postal reform. On 29 December 2017, the president posted, “Why is the United States Post Office, which is losing many billions of dollars a year, while charging Amazon and others so little to deliver their packages, making Amazon richer and the Post Office dumber and poorer? Should be charging MUCH MORE!”[16] While this complaint pertained more to service contracts than the primary provisions of the House Oversight and Government Reform Committee’s postal reform bills, the fact that Amazon has publically supported and lobbied for this legislation could make the president less inclined to support it.

As of this writing, the prospects for postal reform appear bleak. In December 2017, the Postal Regulatory Commission concluded its ten-year rate review and indicated that it would raise postal rates on certain categories of mail.[17] The commission’s announcement reduces the urgency for passing postal reform, as the much-dreaded prospect of raised postal rates is now a reality.

Congressional leaders are currently not taking up the legislative proposals. Chairman Gowdy has not made postal reform a top priority during his committee chairmanship and announced in late January 2018 that he would not seek re-election.[18] House Oversight and Government Reform Committee Ranking Member Elijah Cummings (D-MD) has experienced health problems and has been less active in recent months.[19] Meanwhile, the Senate has yet to seriously consider any proposal of their own in the 115th Congress.

Lessons for the Future

Postal reform is not the only policy that has experienced legislative setbacks in recent years. Recent congresses have failed to pass reforms to areas in which there was broad stakeholder demand for action, such as the US patent system, Fannie Mae and Freddie Mac, state Internet sales tax collection practices, and federal data breach notification rules. What makes postal reform different is that there exists a bill with much broader consensus, which was actually on track to becoming law.

The 115th Congress’s failed endeavor to advance postal reform thus provides two major insights into how the legislative process currently functions. First, this episode indicates that even broadly supported and bipartisan pieces of legislation require legislative champions who will actively shepherd them and that an absence of leadership is almost impossible to overcome. The House Committee on Ways and Means juggles many demands due to its broad jurisdiction. Chairman Chaffetz’s unexpected departure left these bills orphaned, which leaves them vulnerable to getting lost in the shuffle of the Ways and Means Committee’s heavy workload.

Second, this episode indicates that while the prospect of deadlines often motivates Congress to act on pressing matters, even deadline-accountable, material consequences can be scuttled to make room for partisan priorities. While postal reform is important, it is nowhere near as salient as either health care or taxes. The Republican push to pass major pieces of legislation by the end of 2017 took resources and attention away from other legislative efforts, reinforcing how difficult it is to pass even bipartisan legislation.

As a result of the way Congress operates, postal-reform legislation has made no tangible progress since spring 2017. And things aren’t likely to change if Congress continues to mail it in.

Brett Banker is a master in public policy candidate at the John F. Kennedy School of Government at Harvard University. Brett most recently worked as a policy analyst for the VogelHood Group, a public policy research and consulting firm located in Washington, DC.