Home > Featured > Killing in the Name of the State: Capital Punishment in Nebraska and the Way Forward for Progressive Policy 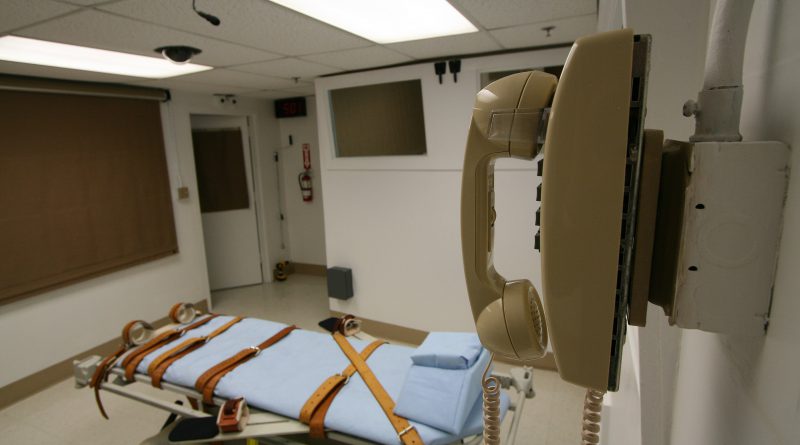 Carey Dean Moore was dying. As a lethal dose of the synthetic opioid fentanyl seeped into his bloodstream, witnesses reported that he “breathed heavily and gradually turned red and then purple” before finally departing. In passing, Moore joined hundreds of thousands of Americans who have succumbed to drugs like fentanyl in the opioid crisis. But Moore was not a victim of that national epidemic. He was executed by the state of Nebraska. At 10:47 am on August 14, 2018, Moore became the first death-row inmate executed via a synthetic opioid.

Moore’s is not like the death penalty cases we frequently discuss in policy schools and in the press: it does not involve wrongful conviction, mishandled evidence, or biased policing. Moore confessed to the murders of which he was convicted and asked for no reprieve. Rather, this case is both remarkable and instructive for policymakers because of the strange recent saga of capital punishment in my home state.

Before Moore’s death, Nebraska had not held an execution since 1997. Public servants and advocates like Senator Ernie Chambers had long fought to abolish capital punishment, with occasional progress (such as a 1979 legislative repeal which was vetoed) but no lasting victory. Nebraska in many ways reflected national trends in the death penalty.  After a massive, decades-long decline—from 300 annual death-row convictions in the country in the 1990s to 30 in 2016—capital punishment is now rarely exercised. The exceptions to this decline are concentrated in a handful of urban, African-American areas with a history of executions. As academics who study the death penalty summarize, “what remains of the American death penalty is quite fragile and reflects a legacy of racial bias and idiosyncratic local preferences.”

But things changed in Nebraska when Governor Pete Ricketts, a Republican, took office in 2014. The scion of TD Ameritrade trumpeted “outsider” credentials during the campaign and was slow to recruit a traditional political team. Democratic legislators saw an opportunity. They argued to Republican colleagues that the costs and logistical problems of capital punishment outweighed its deterrence benefits. With the support of fiscally-conservative Republicans, the state’s unicameral legislature won a veto-proof majority to ban the death penalty.

Undeterred by this defeat, Ricketts launched, staffed, and personally funded a repeal initiative to overturn the ban by referendum.  He was opposed by a statewide campaign that drew on traditional advocates and faith communities. In November 2016, Nebraskans sided with Ricketts by 20 percentage points. After an international lawsuit involving European drug makers who wanted nothing to do with executions and conflicting rulings from the federal government, the state turned to an undisclosed fentanyl supplier as a last resort. Despite an appeal from the Pope days before Moore was set to be executed and a cloud of confusion over whether the means of execution were legal, the conservative Catholic governor pushed forward.

Due to international restrictions on drug sales from European manufacturers, only a handful of drugs were available. Three of the four had never before been used in an execution, meaning that there was no way to determine if the untested drugs would make Moore’s execution a form of torture, which is banned under the Eighth Amendment to the U.S. Constitution. But the state’s last dosage of potassium chloride was set to expire at the end of August. While other state governments focused on how to prevent fentanyl and other opioids from killing Americans, Nebraska’s governor used the same type of drug to end life.

The argument over capital punishment in Nebraska has hinged on interpretations of the U.S. Constitution, religious proscriptions, and disagreements over how to most effectively deter future crimes. All of these debates have occurred as the Nebraska Republican Party moved away from its traditional conservatism towards an embrace of demagoguery. With this shift as a backdrop, Nebraska’s battle over capital punishment provides broader lessons for those who are fighting for progressive policy. In the absence of responsible governance from the right, progressives have a responsibility and opportunity to lead, and they must seize it. Rather than fleeing back to a safe center, they must articulate and organize around a coherent progressive message, particularly within policy areas that seem most averse to change.

The Republican Party has embraced a reckless approach to governance; this creates a responsibility and opportunity for progressives to articulate a comprehensive agenda. Democrats should take advantage of the current moment to push hard for progressive policy priorities that speak to the pressing needs and harsh realities that many Americans now face. Democrats in Nebraska seized the opportunity of an unprepared “outsider” governor to offer a bold policy alternative that was more efficient, equitable, and effective than the status quo. Even though they were unable to beat Ricketts’ self-funded fear campaign or counter his secretive tactics to get the necessary drugs in place, their initial success is instructive for progressives nationally. Around the country, Republicans are running campaigns that rely on voter suppression, racial animus, and literally fascist ideology, and are practicing a style of “governance” characterized by cruelty, corruption, incompetence, and endless scandals. Democrats need to demonstrate the capacity to lead at the national level not just offering resistance or looking for incremental, moderate compromises, but by defining real, alternative solutions. Bold proposals like the Green New Deal championed by Representative Alexandria Ocasio-Cortez (D-NY) could spur growth, drive innovation in renewable technologies, mitigate climate change, lift up communities most damaged by the decline of the American industrial sector—and demonstrate the capacity for transformative leadership.

Achieving progressive goals through less-democratic mechanisms should not be the end of advocacy, but rather the beginning of redoubled persuasion. After the death penalty ban passed, it was in a precarious position: on firm legal footing, but counter to popular opinion. Progressive policies like health care expansion and abortion access, which were won without public support and not followed up with persuasion, are vulnerable to counterattack. Passing policy via ballot initiatives (like 2018 efforts on gerrymandering, healthcare, and marijuana) is ideal because it sends a powerful signal of public support that is hard to discount or overcome. In Nebraska, a campaign fueled by fear and doubt convinced a large majority of voters to reinstate the death penalty, making the path forward on ending capital punishment in the state doubly difficult. Regardless of the mechanism used, progressives must not treat judicial and legislative wins as final victories, but rather as moments to begin a more constructive conversation with skeptics. That means public officials should continue to hold open, public events with voters where they can talk about progress made and continue the conversation. And it means that when we change policy, we need to invest in collecting evidence on how better laws and regulations make a difference in people’s lives.

American voters are not as intransigent on “culture war” issues as it sometimes appears—but changing minds requires investing in personal, purposeful organizing. National polling finds that 54 percent of Americans support the death penalty for convicted murderers, even when acknowledging the risk of executing innocent people and the lack of real deterrence to crime offered by capital punishment. During the 2016 referendum, organizers in Nebraska found that many voters supported the death penalty, but not because they believed it is effective public policy. Rather, they supported it out of fear that if convicted murderers had any chance of re-entering society, voters’ families could be in danger. As one manager in the 2016 anti-death penalty campaign put it after observing dozens of focus groups and helping knock thousands of doors, the “only way to make progress here is to really give people space” to think about sensitive issues and alternatives. “Telling people they’re wrong won’t work; you need a much better conversation” about the policy’s shortfalls. It was only when voters had real time to discuss wrongful convictions and extremely high costs that organizers found room to move— that kind of organizing takes requires real time and investment, but it may be the only way forward.

Being “bipartisan” doesn’t have to be an excuse to water down progressive values. It was the combination of moral and ethical principles, alongside fiscal realities, that helped convince conservative Nebraska senators that repealing the death penalty was in the best interest of the entire state. Finding real common ground in American politics too often means looking for the option that will offend the fewest number of donors and politically-active voters. But real progress comes when we remain steadfast to the principles that matter—and can identify mutual benefits and alternative paths to agreement without total capitulation. Moderate voices might prefer a more incremental approach—but those Americans who sit on Death Row, who struggle to afford medical bills, and who are denied rights because of their color or gender or religion need our support now, not tomorrow.

Before he died, Moore wrote a final note. In it, he reiterated his own guilt and resignation to fate, but argued that others on Nebraska’s Death Row were innocent. “Why must they remain there one day longer than all the years they have been there? … How might you feel if your loved one was innocent and on Death Row?” he asked. The entreaty made little impact on Governor Ricketts or the state’s voters. But as long as capital punishment persists in American society, these are questions with which we must grapple—and which we must continue to raise with our family, friends, and neighbors who are not yet convinced.

The story of the death penalty in Nebraska over the last several years shows that when progressives seize the opportunity to lead, bipartisan change is possible. It also illustrates that lasting change requires an intense commitment to public persuasion and organizing well after initial victories are won.

For my own part, any loss of human life and dignity is a tragedy worth fighting to prevent, and I deeply oppose the government’s use of execution as punishment. But for many in my state, my nation, and this world, there is little room for that sentiment. Being a proud Nebraskan means reconciling the publicly-sanctioned yet grim actions of its government with the love I have for its people and my hope for its future. Governor Ricketts and Republican leaders around the country have opted to rely on politics of fear to build policies of division. A politics of hope and of compassion is the better path, and one we must take—not only to win the moment or seize a political opportunity, but to build a more compassionate and just future.

Ben McGuire is a second-year master in public policy student at the John F. Kennedy School of Government at Harvard University. He has a professional background in campaign field organizing and analytics for field, digital, and early voting. Before coming to Harvard, Ben also served as a research consultant to higher education and K–12 leaders on cybersecurity, data analytics, and optimizing the use of academic resources.