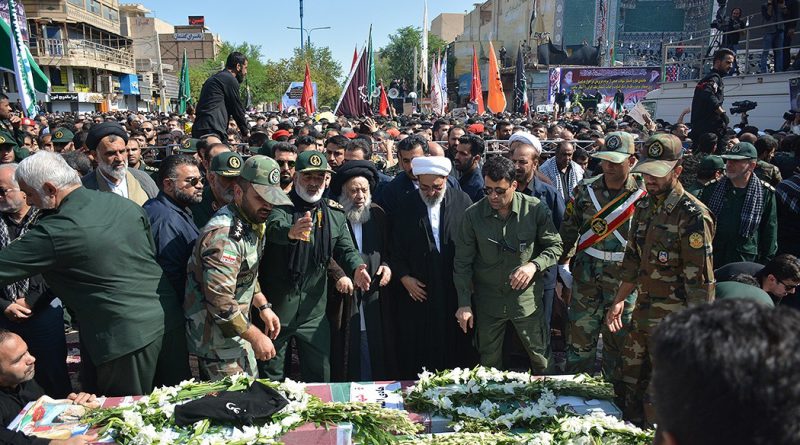 An Iranian Revolutionary Guard parade in Ahwaz, the capital of the Khuzestan province of Iran, ended in chaos in September when four gunmen opened fire on an assembled crowd of troops, civilians and children. Assailants dressed in military garb killed at least 25 people and wounded about 60 more at the parade that was meant to celebrate the 38th anniversary of the start of the Iraq-Iran war. Arab separatists living in Ahwaz were widely reported as being the perpetrators of the attack.

The Iranian government blamed the Arab Gulf countries and the United States, accusing them of supporting opposition groups within Iran. US Secretary of State Mike Pompeo expressed empathy towards the Ahwazi minority in a July 22nd, 2018 speech: “the [Iranian] regime arrests hundreds of Ahwazis, members of Iran’s minority Arab community, when they speak out to demand respect for their language and for their basic beliefs.”

Rather than using these violent events as an opportunity to confront internal policies that may have alienated the Arabs in Ahwaz, the Iranian government fired missiles at Syria a week later, as supposed retaliation for the Ahwaz attack.

The recent armed conflict is a conundrum for advocates of the dominant narrative of Middle Eastern sectarianism, which attributes the root cause of conflict in the region to ancient religious hatreds, often between the Sunni and Shia sects of Islam. The Arabs of Ahwaz are predominantly Shia Muslims, as are most Iranians, so the oversimplified and overused tool of sectarianism fails to explain mechanisms behind Ahwaz separatism. The sectarian narrative only serves to fuel more tension, produce ill-advised foreign policy, and mask the more accurate instigators of conflict, such as economic grievances, racial marginalization, and systematic human rights violations. This cannot be truer than for the forgotten Arabs of Iran.

For decades, the media and policymakers have failed to capture the sheer diversity of Iran’s demographics. Iran is not a homogenous ethnic community divided solely by Sunni-Shia religious fault lines. Iran is composed of Azeris, Balochis, Turkmen, Arabs, and others, who share tribal and ethnic linkages outside and in close proximity to Iranian borders. Failing to understand this simple fact makes sectarianism the default explanation for Middle Eastern conflict.

It is easy to assume that the Arabs of Ahwaz are seeking separation due to ethnic differences. Admittedly, the separatists politicize ethnicity, making “Arab nationalism” a socially relevant strategy to mobilize across ethnic cleavages. The separatists seek supporters for their cause outside their own borders, particularly from the oil-rich Gulf States who are already in conflict with the Iranian regime. But, neither sectarianism nor Arab nationalism is enough of an explanation.

Ahwaz is home to the third largest oil field in the world, located near the Iran-Iraq border with access to Gulf waters. The population is predominately Arab-Shia. Historically, the region was known as Arabistan which literally translates to the “land of the Arabs.”  For centuries, it has been dominated by Arab inhabitants and in the late 18th centaury, it had its own Arab Sheikhdom under the Bani Kaab tribe. Since the annexation of the region by Iran in 1925, the Ahwaz people have failed to reap the benefits of their own wealth. Instead, the Ahwaz capital tops the World Health Organization air pollution index because of factory emissions, traffic fumes, and dust storms. Temperatures exceed 122 degrees Fahrenheit in the summer. Unprecedented toxic waste and poor air quality are polluting Khuzestan’s ecosystem. This “wetland” turned “wasteland” adds immense pressure to the poor and agriculture-dependent population.

Because of these conditions, Ahwazis have sought independence. To do so, they are soliciting support through ethno-nationalistic bonds from the outside. These attempts to improve their living standards are met with violence from the government. Those who speak out, such as Ahmad Mola Nissi, champion of the Arab Struggle Movement, end up killed.

Now, the violence is heating up. The attack in September may have shifted the Ahwazi Arab strategy from a traditional social movement to an armed conflict. The Iranian government was able—to some extent—to keep other ethnic groups at bay, as those groups were somewhat integrated within the Iranian economic and bureaucratic systems. The same does not hold for Arab minorities. The decades of marginalization, lack of economic opportunities and intolerable pollution in a resource-rich region became the precursor for ethnic and economic rivalry.

Therefore, Middle Eastern policymakers should work actively to create more inclusive policies within their own borders. It is important to shift away from mere resource extraction to all-inclusive institution building. Political scientists have argued the success of a nation resides in the inclusiveness of its institutions. Such a position can minimize economic grievances that lead to social and armed conflict.

The sad case of Ahwaz is a decades-old story. When violence, terrorism, and insurgency become everyday life, policymakers and the media should unravel the deeper historic, economic and political causes. Sectarianism is a simplified scapegoat to explain the conflict in Iran and the greater Middle East.

Ali Al Youha is a Master in Theological Studies student at the Harvard Divinity School focusing on Religion and Politics. Ali holds a Bachelor of Arts in Economics from Boston College and a Master of Science in Global Governance & Diplomacy from Oxford University.