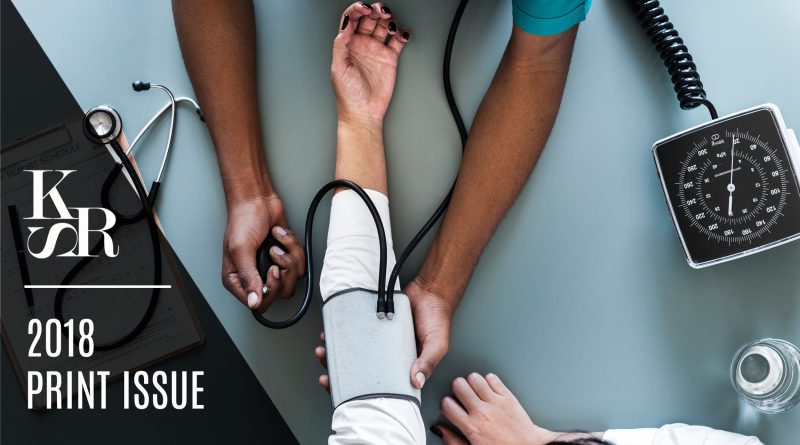 BY STEPHANIE NGUYEN AND MAGGIE SALINGER

David [1] used to sell drugs on a street corner in East Baltimore. His curbside business had offered a glimpse into the life of his customers as they waded in and out of withdrawal. Their oscillation between temporary satisfaction and full-blown suffering didn’t seem worth it to David.

But then, one day, David lost a close family member without warning, and not knowing how to cope with this death, he got high on heroin. Soon after, David was hooked and homeless. He tried to quit. He failed. He tried again. And again, he succumbed to substances.

Around this time, David was arrested. The police busted him for drug possession and brought him to Baltimore City Jail twice. During his second round of incarceration, David was fortunate enough to enroll in a meditation and acupuncture program. The program helped him learn positive coping skills in a community of other inmates. While in prison, David was able to separate himself from his former routines and fellow users to start his life anew. Now, several decades later, David is still drug-free.

As we spoke to David and others like him who are working toward sobriety, a few ideas became resoundingly clear. First, recovery is not a state of being but a process—one that requires immense social support as individuals work to continually reconstruct their identities and habits. The second is that, although David’s incarceration helped him achieve remission, prison is not the optimal destination for individuals who are struggling with his condition.

Fortunately, the United States is beginning to recognize and treat addiction as a chronic disease rather than a crime. However, as we start to make this shift, we must ensure that the health care system is equipped to meet the broad needs of patients with substance use disorders.

There are 20.5 million people who are addicted to drugs and alcohol in the United States, 2.5 million of whom are addicted to opioids. Opioid-related overdoses have reached epidemic proportions, leading to nearly 91 deaths each day.[2] Every one of these statistics is tied to a unique personal experience. Yet at present, our health care system only touches a tiny fragment of the patient journey.

Through interviews with practitioners, policy makers, and people in remission, we aimed to clarify themes in patient barriers to wellness and identify opportunities for the health care system to meet people where they are. We uncovered an array of challenges to providing addiction-related care: time and place, choice architecture, and stigma.

Although David first began using drugs on a street corner, more than a quarter of people who misuse opioids gain access through their own personal prescriptions.[3] At present, clinicians do not have the tools to determine which opioid recipients will later suffer from overdose or addiction.[4] There may be early risk factors that the health care and other social systems fail to capture routinely due to their timing and subjectivity. For instance, our patient interviews revealed that many people who develop opioid use disorder had experienced a feeling during their pain treatment course that they likened to falling in love or lifting a weight from their shoulders. Many of these same patients reported an increased likelihood of relapse during periods of stress. Notably, these experiences and emotions occur outside the purview of the health care system. We cannot rely on clinical encounters alone to identify the trends in opioid overdose.

Biomedical research confirms that addiction is a chronic disease that directly impacts motivation, inhibition, and cognition.[5]  The disease state is distinct from many other chronic illnesses in that it both affects and is affected by choices. This is important because disease-specific behaviors of addiction, such as compulsivity, are incompatible with health-seeking ones. Thus, a health care system that seems relatively accessible to patients with other chronic diseases, like diabetes, may be completely inaccessible to patients with addiction.

The role of choice also plays into a third obstacle: stigma. Many struggle with the amount of agency or blame to attribute to addicted persons, which is part of why some regard the condition as a moral failing rather than the chronic disease that it is. Studies show that stigma against people with addiction exceeds the levels recorded for other mental illnesses. Continued stigma lowers public support for health-focused programs, decreases patient demand and access to services, and negatively affects attitudes of both providers and community members.[6]

All three of the these addiction-specific obstacles are interrelated, adding to their complexity. However, this also means that programmatic improvements can chip away at these challenges simultaneously. We’ve identified three strategies to incorporate more effective treatment initiatives into our current health care system: foster social support, create sober environments, and expand care networks.

Recognizing the significance of social support in his own recovery, David decided to devote his life to helping others put down the needle. His generous act of service has also been beneficial to his own recovery process. In behavioral economics models regarding the psychology of addiction, social activities that promote service and selflessness are actually considered to be direct substitutes for drug use.[7] In essence, David replaced the “good feelings” that come with the high of drug use with the good feelings we get from helping others. “Mentoring people gives me meaning,” he observed. “And you know what? I need that, too, to stay clean.”

As we listened to David and others, we realized that the health care system’s standard patient-provider interaction is not explicitly designed to help people rebuild networks and restore a sense of purpose. Instead, clinic visits tend to be individualistic and rushed. Our search for solutions led us to an outpatient opioid treatment startup called Groups. In addition to offering behavioral therapy and medications to treat substance abuse disorders in group settings, Groups intentionally fosters a sense of community. It asks patients to exchange phone numbers to coordinate carpools and encourages them to serve as peer mentors. The company, which now has clinics across the country, describes its model as one in which “people at different stages of recovery learn from each other, build collective wisdom, and hold each other accountable.” Groups CEO and Co-Founder Dr. Jeff DeFlavio believes this is key to the program’s ability to maintain a 95 percent retention rate and 85 percent abstinence rate at the six-month mark.[8]

For David, who had no home and nowhere else to go, it was a jail sentence that shielded him from poor choices. For many others, 12-step programs like Narcotics Anonymous (NA) serve as that safe space. In any given area, there are dozens of local community venues that host NA meetings throughout the day. From interviews and visits, we learned that some members continually bounce from one meeting to the next to protect themselves from “the dope man,” who is just a phone call away. Many of the 12-step participants also spoke highly of their residential recovery homes, alluding to the importance of having sober homes and friends.

Notably, NA has received criticism for being disconnected from the health care system and for advocating against medication-assisted therapy—the gold standard of treatment. While this criticism is valid, we would be remiss to ignore the positive features of a program that people in recovery have created for themselves. What NA and residential recovery homes demonstrate is that medication reconciliation visits and intermittent therapy sessions may not be sufficient for patients in early stages of sobriety. In order for the health care system to meet these patients’ needs, it will need to reach well beyond the walls of a clinic to create and foster sober environments.

If the US health care system is over-reliant on highly trained professionals and clinical encounters, then it will miss opportunities to prevent, identify, and intervene in opioid misuse and overdose.

Highly trained professionals include not only physicians but also physician-extenders, such as nurse care managers who staff doctors’ offices to count pills, complete treatment contracts, and screen urine samples for chronic pain in patients taking opioids.[9] The term even refers to peer recovery coaches, who themselves have firsthand experience with addiction, but who have no prior relationships with patients. In many states, peer recovery coaches undergo extensive coursework, shadowing, and oversight. In fact, following passage of the Caregiver Advise, Record, Enable (CARE) Act in November 2017, Massachusetts launched a commission to review credentialing standards and determine whether peer recovery coaches should be required to register with a licensing board.[10]

Even though clinicians and extenders ought to play a central part in opioid-related prevention and treatment initiatives, there is still a need to enlist unskilled individuals in this effort. If engaged appropriately, family members and friends could make excellent care partners, especially since they have much greater contact with patients, including at high-risk timepoints. Informal peer sponsors and peer referrals (e.g., bring-a-friend-to-treatment programs) are two examples of interventions that would systematically leverage organic relationships.

A Vision for Patient-Centered Addiction Treatment

As we wrapped up our interview with David, he reflected, “I’ve come a long way, and I’ve helped a lot of people.” Indeed, he even helped us by sharing details of his personal journey. His insights illuminated the recent trends in addiction-related policies and the gaps in current treatment programs.

Through this research on patient-centered opioid treatment initiatives, we’ve come to believe that most of the puzzle pieces are within reach but have yet to be arranged into an ideal picture for addiction care. Our vision is that the country will continue to transition from criminalization to medicalization of addiction and that when we do achieve mental health parity, we won’t simply replicate our traditional health care structures. Instead, we hope that ongoing efforts to integrate and coordinate services will extend beyond the confines of the clinical setting—making treatment an act of community and a part of everyday life. Once addiction care becomes as warm and accessible as our coffee shop gathering with David, we’ll know we have succeeded.

Stephanie Nguyen is a user experience designer and researcher and was most recently a digital service expert at US Digital Service in the Obama White House. She’s currently a masters in public policy candidate at the John F. Kennedy School of Government at Harvard University and a Gleitsman Fellow for social change at the Center for Public Leadership.

Maggie Salinger is a dual MD/MPP candidate at Emory Medical School and the John F. Kennedy School of Government at Harvard University who will begin her residency in internal medicine upon graduation. During her time at Harvard, Maggie has served as a Dukakis Fellow in Governor Gina Raimondo’s office, where she has helped design a comprehensive strategy for addressing Rhode Island’s opioid crisis and launched research initiatives to build an evidence base for opioid prevention programs.

[1] Name was changed at the interviewee’s request.

Photo by rawpixel on Unsplash