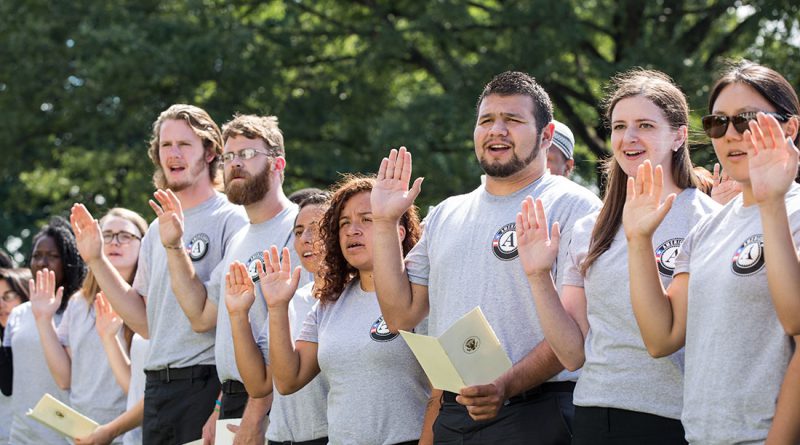 BY KEVIN FRAZIER AND MASON JI

To paraphrase the late Senator John McCain, “Civic participation over a lifetime will strengthen America’s civic purpose.” Now more than ever, we need civic purpose. A compulsory national service requirement can help us find it.

The state of our civic well-being has been trending downwards: voter turnout is consistently low compared to other mature democracies; many young Americans are disengaged from and disinterested in politics; and public trust in Washington has plummeted.

The faults in our system are the result of a new industrial revolution. Technological advances and drastic changes in the wealth distribution have revealed foundational cracks at the bedrock of aging institutions. Young people have been particularly impacted by these transitions. Civically, they are skeptical and disappointed—just one in five millennials trust the government. Professionally, they are pigeonholed and frustrated—as recently as 2017, 51% of graduates from the class of 2015 were underemployed. And, financially, only 41% of millennials own homes—they are saddled by debt and unsure of their long-term prospects.

These developments reflect a historical pattern: upheavals in the economic and international orders periodically prompt the United States government and its people to review, revise, and reinvent their social contract. After the Great Depression, President Franklin D. Roosevelt issued a new contract—one that endowed Americans with key economic protections—through the New Deal. In a similar fashion, President Lyndon B. Johnson used the Great Society to restructure the terms of our social contract amid demographic shifts and anticipated changes in our nation’s capacity to care for aging and indigent populations.

In response to the new industrial revolution’s ripples, the government needs to once again update its social contract to give younger Americans a more promising professional picture and safeguard democratic values. A compulsory, year-long national service requirement—let’s call it the National Service Corps (NSC)—can fulfill both of those aims.

On the first aim, the NSC would train young Americans in vital skills. Training under the NSC would borrow from the German model of apprenticeships. In Germany, approximately 500,000 students a year gain vocational training by pairing coursework with apprenticeships in businesses across the country. The NSC would likewise partner with the private sector to identify service positions in high-demand industries. Cohort by cohort, a skill-based service program would provide the private sector with greater labor force stability.

On the second aim—reviving our democratic ethos and strengthening its institutions—the NSC would include public sector positions by broadening and scaling up the United States’ current best approximation of national service: the voluntary AmeriCorps program. AmeriCorps has created a network of public partners around the nation. This means participants regularly find themselves in previously unexplored regions of the country. A truly nationwide program like the NSC would recruit even more public entities. Accordingly, a compulsory service requirement could revive America’s melting pot by sending young Americans to areas with vastly different cultures and demographics.

There would also be an added future public good: increased democratic stability. A more democratically-engaged and professionally-advanced population can improve the tenor of our civic conversations and the caliber of our future public servants. Studies of the impact of military service on political participation demonstrate a strong, positive correlation between serving and sacrificing for one’s country and engaging with its democratic institutions. Veterans of all education levels, ethnicities, and income levels are statistically more likely to vote. National service, which similarly demands sacrifice, can achieve these same effects.

The NSC would necessitate a substantial operational lift, but our federalist system of government is up to the task. Sponsored by the federal government and implemented by state officials, the creation of a service corps is surely within our wheelhouse. The Workforce Innovation and Opportunity Act (WIOA) provides lawmakers with a potential template for the NSC. Passed in 2014, the WIOA directs federal funds to state workforce systems. The same structure could be applied to the NSC: states would be responsible for identifying private, public, and nonprofit organizations capable of employing, training, and developing NSC members.

What’s more, there’s a robust political coalition ready to pass a bill funding the program. Senators like Ben Sasse (R-NE) and Joe Manchin (D-WV) are two potential champions of a bipartisan package. Senator Sasse touts the importance of a job to shaping youths’ development, and Senator Manchin speaks proudly about the fact that more AmeriCorps volunteers hail from West Virginia than from any other state. This coalition could also include progressive officials, such as Corey Booker (D-NJ), interested in a federal job guarantee program—the NSC would be a great test case of the government’s capacity to coordinate private and public stakeholders. Finally, more conservative officials may be persuaded by the likes of General Stanley McChrystal, a staunch promoter of national service, into seeing the value of the NSC to national security.

Without a doubt, substantial opposition will mount against the compulsory nature of the program. Overcoming this pushback will prove difficult and hinge on program administrators and partners’ ability to demonstrate the value of the service. The creation of pilot programs in West Virginia and Nebraska—or other states with a high demand for younger, more educated workers—could serve as an interim step. These pilots could reveal opportunities to structurally improve the program, reassure skeptics, and attract a broader coalition of support for nationwide implementation.

Even so, if youth do not see how the NSC betters their financial future, they will dodge the process. If the private sector does not record a decrease in skills mismatches, they will hire foreign laborers with the requisite know-how. If officials do not think the NSC is rebuilding democratic institutions, then they will support its abolition. In each case, these parties would be justified in their opposition. A sacrifice of liberty should entail some sort of benefit; that’s foundational to social contracts. We believe that a properly structured NSC—one that benefits the private and public sectors, as well as its participants—can make the sacrifice well worth it.

Ultimately, participation in the NSC would bind citizens to the government in a new way: invest your time in serving others today to boost your professional outlook tomorrow. The resulting change in our social contract could make Senator McCain’s dream of civic participation a reality.

Mason Ji is a JD candidate at Harvard Law School, and holds degrees from the University of Oxford and Yale University in global affairs and public policy. He is a former delegate to the United Nations and a former White House Ambassador for Asian Americans and Pacific Islanders. His research is concerned with US-China relations and the changing nature of global governance and diplomacy.

Photo: Volunteers take the AmeriCorps pledge during an event to honor the 20th anniversary of the AmeriCorps national service program, on the South Lawn of the White House, Sept. 12, 2014. // Official White House Photo by Pete Souza