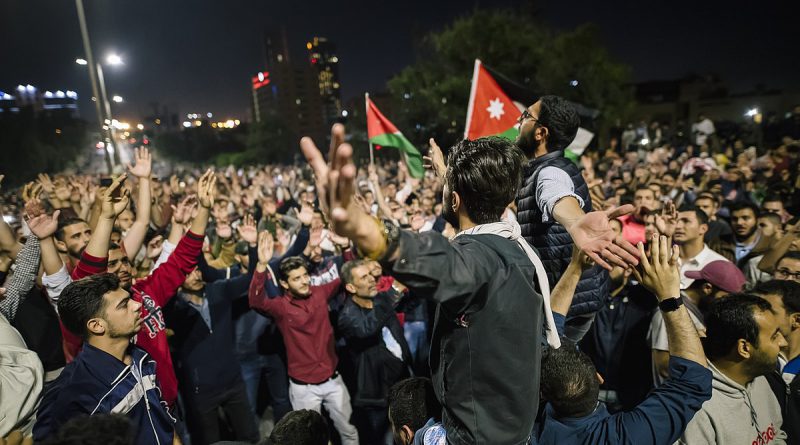 On May 30, 2018, as I sat in my apartment in Cambridge, MA, I scrolled through my Instagram photos of my home, Jordan. Usually, photos with the caption “Jordan is beautiful” are images of Jordan’s nature, heritage, and historical sites. But in May, it was different. The caption “Jordan is beautiful” was an image of the 18,000 Jordanian people protesting. Another was a photo of a young woman speaking into the crowds with a megaphone as thousands of people held signs, sung songs, and chanted together. Instagram captions were capturing a revival of Jordanian’s identity; one with the spirit of hope, celebration, and unity.

The protest was driven by economic grievances. “We don’t want to be like Syria, we want to be like Singapore,” one poster stated. Another poster had a list of demands: “Change the government; revoke the Income Tax Bill; review tax policy; return subsidies on bread; reduce costs of electricity and burned fuel; prosecute corrupt officials and thieves.”

The people spoke and the government responded. Within one week, the government was dissolved and Omar Razzaz, the former Minister of Education, was appointed Prime Minister; King Abdullah II decreed a halt to the increase costs of burning fuels and electricity; and the new Prime Minister revoked the Income Tax Bill. The government quickly started to make concessions and asked protesters to trust the new Prime Minister. One month later, the new Prime Minister made a commitment on reform programs in the first 100 days of office on taxes, social services, and the economy. The people, however, don’t only want a change in figureheads. The challenge for civil resisters in Jordan now was what to do after “the win” to create real systematic change.

Jordanians have a strong history of street civil resistance and have become very good at protesting. In response, the government has become very good at managing these protests.  It is like a forgotten dance that reappears every few years. In 1989, 1996, and 2010, Jordanians took to the streets to protest austerity measures, and the government responded by removing the prime minister and adjusting the prices. But is the resistance of 2018 different or the same old dance?

This year, Jordanian civil resistance has shown clear signs of maturity in its leadership, diversification of tactics, and the level of inclusivity.

Historically, civil resistance on economic and political reform in Jordan has depended on three tactics: sit-ins, riots, and marches. This year, 33 worker associations and unions led a national strike—a new tactic—against the Income Tax Law, which got the government’s attention. According to the Jordan Labor Watch, workers and day laborers have held strikes and won significant concessions from their employers. This year, the unions scaled their experience to the national level.

The use of new, creative, and organized non-violent tactics offered room for all Jordanian citizens—not just political activists and union members to participate. When the government raised the price of gas, people responded by leaving their cars in the middle of the street. Unions called workers to the street through the strike. Protest called the youth to the street.

The protests were inclusive of all social classes. The new Income Tax Law impacted business owners, workers, and consumers. Everyone’s livelihood was at stake. Many of the participants were attending their first protest. The movement was able to fully represent the Jordanian people, rich and poor, elite and non-elite, Jordanian tribes or people of Palestinian origin.

Despite these impressive steps forward, not everything changed. The final step in the usual dance is for the Jordanian people to give the government the sole responsibility to fix the problem and return home—and they did. Too quickly, the people returned home and forgot about the power they had built.

This protest—with its leadership, creativity and solidarity—could have changed the final step. Activists could have shifted from mobilizing to organizing. The protests could have been an opportunity to identify and recruit people to launch an anti-corruption campaign, create a watch-dog entity, or establish an organization that could collaborate with the government to reach shared goals.

As Jordan’s civil resistance continues to mature, its leadership will need to commit to more than short-term, aesthetic change and follow through on efforts to secure long-term, systemic reforms. 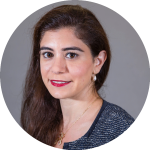 Rawan Zeine is a 2018 Mason Mid-Career/Masters in Administration Program graduate at the Harvard Kennedy School from Jordan. She graduated magna cum laude from Emerson College, receiving a BSSP in Marketing Communication. Later, she received an MSc in Political Sociology at the London School of Economics and Political Science. She was awarded certificates from Harvard Executive Education in the Leadership, Organizing and Action: Leading Change (LOALC) and Leading Non-Violent Movements programs. In 2009, she established Ta3leeleh, a registered NGO, that creates spaces for self-expression, social cohesion, and community efficacy. Since 2011, Rawan has been a community organizing trainer, supporting activists to develop their leadership and organizing skills in the Arab world, US, and globally online. For seven years, she has worked with Professor Marshall Ganz on LOALC as a teaching fellow and head teaching fellow, supporting students around the world launch community organizing campaigns.