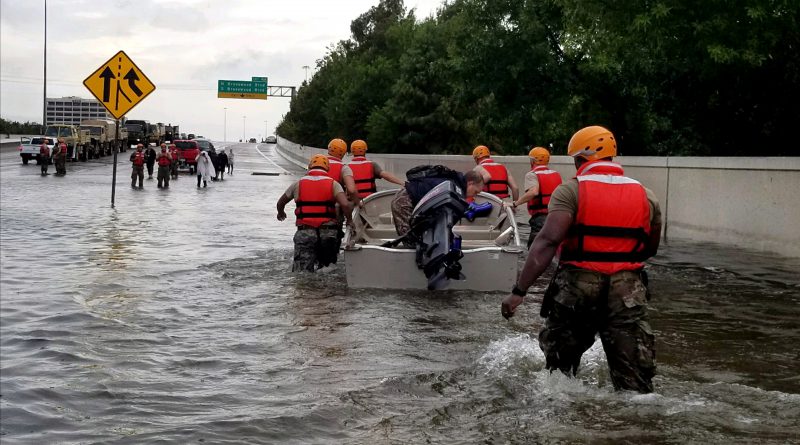 BY ANDREW POULIN AND PARTICIPANTS IN THE DUBIN FIELD LEADERSHIP EXPERIENCE

“A natural disaster does not create crises, it reveals them.”

When Tropical Storm Harvey hit the greater Houston area on August 26, 2017, it dropped over 50 inches of rain—more than Houston’s total annual rainfall—in only 36 hours. Roads, shops, and homes were quickly inundated. Over 190,000 structures were flooded, 89 people were killed, and there were over $180 billion in damages.

In May, as part of the Dubin Leadership Field Experience, a group of 15 Harvard Kennedy School students traveled to Houston to study climate change planning and crisis management. We met with elected officials, first responders, medical professionals, faith-based organizations, and affected citizens. We toured Emergency Operations, Army Corps of Engineers, NASA, and Coast Guard facilities. And we left with a deeper appreciation for how a city responds to a crisis.

We found that the response effort to Hurricane Harvey, which was supported by massive numbers of volunteers, is widely seen as a success. Houston officials learned the lessons of previous hurricanes, particularly with respect to evacuation decisions and coordination among first responders. And although every natural disaster will be different, Houston’s successes and shortcomings offer several key takeaways that can be tailored to a variety of crises.

First, after survivors were rescued, there was no designated drop-off point. Someone picked up by a helicopter, boat crew, or high-water vehicle might then just be dropped off on the first highway overpass above water and left to wait for the next vehicle.

Second, Houston officials attempted to monitor rescue requests posted on social media. They struggled, however, to efficiently incorporate social media into traditional disaster response. The effort essentially amounted to designating a staff member to watch the different sites to see if someone, or a concerned relative, posted a plea for help. Social media companies could perhaps lead in this area in the future by developing software that can communicate the issue and the victim’s location to first responders.

Third, the influx of volunteers needed to be managed. While first-responders were grateful for the overwhelming volunteer support—everyone with a boat was on the water helping people—it also led to duplicative efforts where rescue assets were sent to a house only to find its occupants already rescued. Officials considered deputizing these well-meaning volunteers, but decided the liability risks were too great. At the end of the day, the success of the rescues is most important, but there is room to improve the efficiency of rescue operations.

2) Failing to Plan is Planning to Fail

General Eisenhower noted that “Plans are worthless. Planning is everything.” The best thing a city can do to prepare for a crisis like Harvey is to develop a disaster relief plan and practice, practice, practice! Doing so can reveal critical shortcomings in the plan. Considering its preparedness for Harvey, Houston has identified several planning needs for future crises:

First, many first responders noted that Houston could have done a better job strategically prepositioning equipment in the days leading up to the storm. Instead, some assets were stranded and could not be used effectively when the flooding began.

Second, first responders need proper training and the city should periodically reevaluate training needs. After Harvey, Houston fire rescue teams identified the need for swift water rescue boat training but have not been able to get funding for it yet.

Third, the city must ensure it has the proper equipment. Since Harvey, Harris County has doubled its rescue boats and is seeking to acquire more high-water vehicles. The Coast Guard is also working on a Memorandum of Understanding with the local Marine Corps Amphibious Unit to facilitate Marine vehicles’ assisting with future disasters.

Finally, officials must plan for medical health needs. When people were forced from their homes, many of them left behind their medicine. Houston identified three primary medical needs during Hurricane Harvey—heart, diabetic, and behavioral health medicine—and were able to get extra supplies delivered. Cities need to consider how they will supply medicine in a crisis and how it will be distributed.

Large organizations like the Red Cross play a critical role in disasters, but smaller community and faith-based outreach centers are just as important. During Harvey, it took seven days for the larger organizations to set up operations. In the meantime, it was these smaller groups that helped shelter, clothe, and feed people in need, and they continue this work today.

There are several elements to be mindful of for these smaller groups. First, Houston’s Coordinated Assistance Network System helped coordinate among the different centers. The system tracks assistance received thus far and remaining needs across many aid organizations, preventing duplication of efforts.

Second, local organizations built up a treasure-trove of information about conditions on the ground and passed it on to government officials. This occurred mostly on an ad hoc basis, however. A more formal information-sharing mechanism, both between community organizations and with the government, could help all parties better identify the areas of need and allocate resources accordingly.

Finally, the federal government should approve more grants to these smaller organizations. They know the needs of the people and have a proven record of providing immediate relief. Despite their past success, faith-based first responders continue to face challenges in securing funding.

Ultimately, there is no silver bullet to disaster response and each city must develop its own plans. A comprehensive yet flexible solution must be built, starting with a well-oiled central coordination mechanism, proper planning, and empowered local community outreach centers. Every natural disaster will bring new and unexpected challenges, but cities and states can take these steps to position themselves and their residents for future success. Houston’s experience with Harvey underlined a truth in emergency planning: a natural disaster does not create crises, it reveals them. The views expressed in this article are entirely based on the opinions of its authors and not of the Harvard Kennedy School or the Center for Public Leadership.