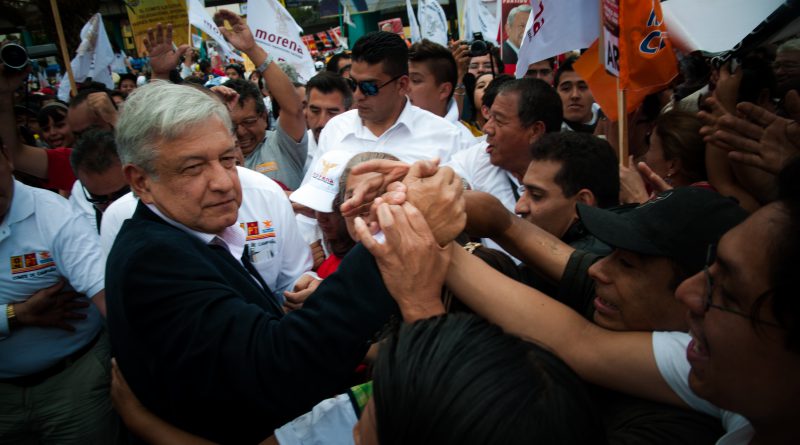 Fresh on the heels of a disastrous G7 summit, Mexico is poised to elect a President whose aggressive approach may scorch as much earth as his northern counterparts. A victory for Andrés Manuel López Obrador (also known as AMLO) will immediately impact negotiations over NAFTA and immigration. Regardless of how the race finishes, his success contains key lessons for progressive campaigns in the United States.

Like other global left leaders, AMLO has been prominent in national politics for decades, serving as Mexico City’s mayor and running for President in 2006 and 2012. Yet, he crusades as a populist progressive against elite-serving institutions. Critics call him another Hugo Chavez. The business community opposes his candidacy as risky and uncertain for trade, but a closer look shows that AMLO is far from a leftist caricature.[1] His record features not ideological extremism, but mainstream reforms, and his somewhat conservative mayorship ended with 84 percent approval after moves on pensions and targeted infrastructure spending improved life in the city.

AMLO’s campaign against status quo policies and parties has carried him toward what could be a resounding victory; June polls had him ahead in all age groups and income brackets. Candidates in the United States face very different economic and political realities, but AMLO’s impending victory contains lessons for political campaigns in this country: electoral punishment is an opportunity for real change, business community antipathy need not be politically fatal, and voters may finally be ready to scale back the war on drugs.

Moments of electoral punishment are opportunities to argue for real, systematic change. Despite holding immense power for most of the twentieth century, Mexico’s ruling Partido Revolucionario Institucional (PRI) has been in a slow-motion collapse for three decades. The current PRI administration has struggled to fend off corruption, violence, and a series of scandals. Their candidate barely factors in polls and 80 percent of Mexicans want to switch the governing party. AMLO’s pitch to voters is not small changes or protecting popular programs, but major changes across sectors. By staking out a strong position, he has forced debate far from the incrementalist space where traditional parties have fought.

In comparison, opposition to a historically unpopular president in the United States is fractious, as Democratic squabbles over healthcare and financial regulations explode into public view. In primary elections, national Democratic Party leaders have intervened to push back against a wave of far-left candidates pushing for radical change. Despite these efforts, the radicals are winning. Here as in Mexico, voters tired of broken policies are rewarding candidates who articulate a bold path forward. Playing defense won’t engage voters—and it won’t save the social safety net. The anti-incumbent streak running through American politics is not just a risk but an opportunity—to use this moment of electoral punishment to set a strong, progressive agenda that isn’t captive to the politics of the past.

Business community antipathy shouldn’t stop campaigns from advocating policies that voters want. Politicians’ close ties to wealthy business owners has been a huge target of AMLO’s campaign. Business leaders call his proposals “catastrophic” and urge employees to vote for anyone else, but it hasn’t hurt his candidacy. Perhaps this shouldn’t surprise; despite huge growth at the top of the economy, 64 percent of Mexicans say their economic situation got worse in the last year. In this environment, politics of continuity have become untenable.

Here, AMLO’s success parallels the United States, where rising inequality fuels voter anger. When President Trump ran, opponents trotted out wealthy celebrities and business leaders warning he would be bad for the economy. Voters collectively shrugged. Trump argued power structures were robbing voters, and billionaire hand-wringing to the contrary wasn’t compelling to those who felt robbed. Policies challenging entrenched interests (e.g. universal health care) will face blowback. Rather than run from that fight, campaigns should articulate why what is good for business isn’t always good for constituents. Voters have already shown willingness to bet on those messages.

After decades of failed policy, voters are ready to roll back the war on drugs. Giving amnesty to drug gangs for peace is one of AMLO’s most controversial positions. His suggestion that marijuana legalization should follow could upend the conflict. With at least 200,000 murders in Mexico over the last decade, violence surrounding the drug war casts a horrifying pall over public life.[2] Opponents attacked AMLO’s proposals as giving in. His poll numbers improved. Voters appear to agree that continuing failed policies is no longer viable.

The drug war within the United States is not the crisis in Mexico, but American voters, tired of exorbitant costs and unjustifiable, discriminatory incarceration, are pushing for reform. Support for marijuana legalization moved from 31 to 61 percent between 2000 and 2018. Marijuana is now legal in some form in 30 states and the District of Columbia, with another five to ten states potentially liberalizing this cycle. Even in conservative states, voters want to hear new ideas on drug policy. Campaigns unwilling to take the lead on this issue could miss a major opportunity.

AMLO is likely neither the Hugo Chavez his opponents fear, nor the progressive hero his supporters crave. But if he can continue to be the competent administrator that he has been throughout his career, it may be far better for the country. No matter the result on July 1, the campaign demonstrates that when voters want to punish incumbents, it creates an opportunity for opposition to stake out and achieve major policy shifts. It shows losing business support doesn’t have to be a campaign’s death knell if voters can see and understand that their interests are being served. Perhaps most importantly, it shows that status quo policy in the war on drugs is no longer inevitable. When campaigns can articulate clear, practical steps to move forward, voters may be ready for change.

Ben McGuire is a 2019 candidate for a Master’s in Public Policy from the Kennedy School and a former researcher, organizer, and data analyst. He has participated in many political campaigns as a volunteer, ran a field office in a 2012 Senate election, and worked in the Analytics team in Secretary Clinton’s 2016 campaign.

[1] In fact, some of the strongest criticisms of AMLO come from his left, about his coalition with the right-wing evangelical Christian Partido Encuentro Social (PES).

[2] 82 percent of voters believe violence worsened in the last year, and at least 113 candidates have been murdered in just the last few months.