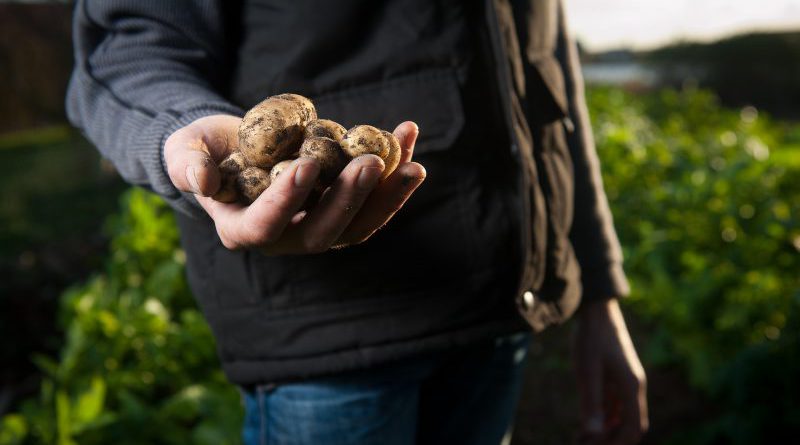 The first thing I noticed while talking with Andrew Rogers, who runs Clark Farm in Carlisle, Massachusetts, were his large, calloused hands, evidence of a life dedicated to arduous manual labor. It was clear that he invested much of his very being into an unforgiving industry. We are accustomed to enjoying the pre-packaged rustics of farm life on the cover of publications like Bon Appetit, but few of us understand the ups and downs inherent in farming. Andrew not only has to worry about both erratic weather conditions and the whims of a blight, he also must contend with a limited ability to foresee future crop conditions—especially as a changing climate has lengthened growing seasons.

During our visit, Andrew lamented the recent death of one of his lambs, likely killed by coyotes, and the occasional loss of a hen to the same perpetrators. A crop of cherry tomatoes had also sprung out unexpectedly only to wither soon thereafter for reasons unknown. Burdens like organic certification fees only add to the headaches. But Andrew’s farm is a Community Supported Agriculture (CSA) farm, and this model allows farmers to mitigate risks and losses. A 2017 USDA study highlighted the model’s various advantages. Firstly, customers pay for produce upfront which reduces farmers’ risks. In this way, risk is actually shared between the consumer and the producer. Secondly, the direct-to-consumer framework of CSAs is highly interactive, enabling farmers to experiment with new types of crops and receive “good feedback on demand,” as the USDA report put it. Andrew excitedly noted how he had recently started growing vegetables popular among some immigrant groups, highlighting the particular adaptability of a CSA model in the face of demographic shifts.

Andrew mentioned his customers various times during our visit. He was keenly aware of their interests and the products they wanted. The pasture-raised pigs produce a “better-tasting meat” because they enjoy a more enjoyable life (I would invite the meat-eaters among us to peruse Temple Grandin’s work on the effect of stress on livestock and “meat quality”). And his niche market is willing and able to pay a premium for that high-quality pork. In addition to flexibility, CSAs attract a loyal customer base, and oftentimes an affluent one. It behooves the farmer, from a business point of view, to invest in that community of customers. And Andrew has done his fair share of investing. He has invited area children to the farm and is an extremely active member of his community.

In addition to the pecuniary advantages of a CSA farm, they also contribute to a community’s awareness of their food sources. With more creative ways of ensuring equitable access to CSAs, through sliding membership scales and the acceptance of SNAP and EBT, the awareness and nutritional benefits of farm-fresh food can benefit the underserved communities who most need it. Indeed, much needs to be done to expand these communities’ access, lest the relationship with food systems be reserved for only those who can afford it.

Broadly speaking, it is somewhat rare that we take the time to get to know the intricacies of our food systems and the policies that dictate what we eat. One of the more rewarding and moving moments of our visit was when I came eye to eye with a pig. I was struck by how remarkably human-like it was, with a defined dark chestnut brown iris and delicate, almost infant-like eyelashes. There was a hint of wariness it seemed to convey when we, a posse of strangers, came near. These animals were clearly sentient beings. The absence of moments like these, with pigs and other animals raised for meat, in our daily lives has allowed us to tolerate our sometimes-contradictory attitude towards pets on the one hand and the intelligent pigs we eat on the other. Several years ago, Michael Pollan noted in The New York Times Magazine that “the disappearance of animals from our lives has opened a space in which there’s no reality check,” either on their inclusion in the circle of our moral consideration or the inexpressive brutality associated with meat production. We can tolerate that brutality because we have no connection whatsoever with pigs like those on Clark Farm. English critic John Berger, who suggested in “Why Look at Animals?” that “the loss of everyday contact between ourselves and animals—and specifically the loss of eye contact—has left us deeply confused about the terms of our relationship with other species.” The loss of contact, with some modification, could be extended to plants. By not seeing the withered cherry tomato plants and not engaging with farmers about the risks they face on a daily basis, we choose to look away from the food systems that are constructed to feed us. 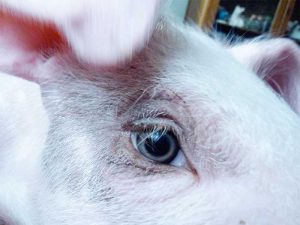 Interaction with farms increases our civic awareness and empowers us to make more informed decisions regarding policies on animal protection, health, and support to farmers, as well as our food consumption decisions in general. Should we eat meat? What about out-of-season fruits and vegetables? Why are costs for healthier foods prohibitively high? Farms expose us to the moral issues at the center of food policy, such as risk, access, health, and sustenance. And, especially since we have the privilege of accessing farms and engaging with farmers, we should. More importantly, we should ensure that those disadvantaged communities that do not enjoy the same privilege have access to these discussions and decision making. A 2017 study on The Food Project, a Massachusetts-based non-profit devoted to promoting food justice among youth in underserved communities, noted that residents in low-income areas had less healthy food options. In these communities, food companies and supermarkets set prices for fresh produce prohibitively high and prices for less healthy packaged foods at much more affordable levels. The phenomenon is not uncommon. Growing their own produce in community gardens, however, allowed low-income residents to participate in a form of resistance: “…ultimately that is where the power is. That’s where the peace is. That’s where the meal comes from.” Community gardens, like farms, may not solve food justice issues, but they can contribute to our broader discussion of access to and equity in food systems.

The more insight we have into growing food, whether it’s at a farm or in a community garden, the better relationship we can have with our food systems, and the more mindful consumers we become. We speak often of the sentience of animals, but a visit to a farm provides us with an opportunity to be even more sentient human beings. 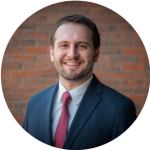 Joseph Manganiello is a MPP candidate at the Harvard Kennedy School, where he is concentrating on social and urban policy. He has worked for the past several years for the US government as a foreign media specialist and an analyst on European socio‐political issues, to include transnational radicalization and marginalization of immigrant communities. He is co-chair of the Food and Agriculture PIC at HKS and has interned at the US State Department, the New York City Parks Commissioner, and Sesame Street.