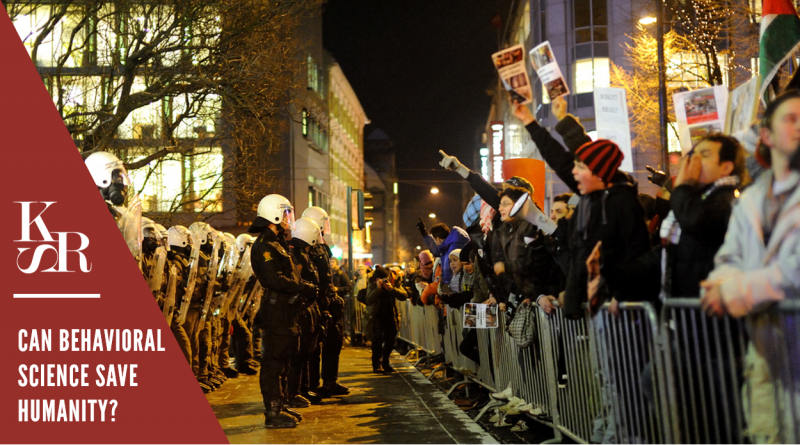 BY SYLVIE STOLOFF AND ANNA GIANNUZZI

What if we could deescalate some of the world’s deadliest conflicts by nudging people to think differently about their opponents? Contemporary international conflicts are increasingly shaped by identity politics, since religion, race, social background and other identity-based factors play a large role in determining political affiliations. This poses a problem for traditional means of conflict management, such as international treaties or economic pressures, which often neglect these factors. Insights from behavioral science can help. Recent research indicates that psychological interventions can promote cooperation between conflicting groups at the individual, group, and even societal levels.

Much of the behavioral science literature aims to address identity-based divides by encouraging cooperation between individuals from different groups. One of the primary contributions of this research is the idea that receptive mindsets are socially malleable: even people of starkly contrasting views can embrace cooperation with a little encouragement. Interventions as simple as sharing a meal with someone of an opposing political view can make a big difference. Harvard Kennedy School professor Julia Minson demonstrated in a recent study that sharing a meal with an ideological opponent improved participants’ openness to opposite views.

Another study conducted among Israelis found that exposing individuals to extreme versions of their own arguments had the effect of “unfreezing” some of their previously-held ideas by causing them to reflect and contextualize their opinions. In one of these studies, researchers exposed participants to a video message that asserted that the Israeli-Palestine conflict was necessary in order to maintain a strong army. A year after the experiment, those who received the intervention perceived Palestinians as less responsible for the conflict and were more supportive of peaceful resolutions to the conflict compared to those who did not.

Psychology can be helpful not only in understanding the decisions of actors within groups, but also in informing the way groups interact with one another. According to Daniel Shapiro, a clinical psychologist and director of the Harvard International Negotiation Program, conflict between groups can be assessed along two dimensions: affiliation and autonomy. Affiliation refers to the emotional connection groups share with each other, and is bolstered by communication and respect between them. Autonomy describes the groups’ freedom from each other—in other words, each group’s ability to make independent decisions. Shapiro argues that conflict is especially likely to arise when both affiliation and autonomy are low. Training programs that incorporate these ideas have been effective at promoting cooperation between groups in conflict. Shapiro cites the experience of H.R. McMaster, current US National Security Advisor, during the Iraq War as a case in point. McMaster provided special training in these concepts for his troops and worked hard to build affiliation with the local population where his troops were based. When the time came for them to leave, the mayor of the town wrote a letter formally requesting the squadron stay another year.

The broadest approach to international conflict management involves changing social norms held across multiple groups. Again, insights from psychology can help address inter-group conflict. For example, according to Oliver Kaplan, an emotional understanding of the relationships between violent rebel groups and the organized government combatants that seek to restrain them can help researchers determine the most appropriate means for changing norms. Kaplan found that local civilians are more effective in reaching rebel groups than international political organizations because they share cultural values, and rebel groups often depend on civilian support. In Colombia, for example, international organizations made little progress influencing rebels from the Revolutionary Armed Forces of Colombia (FARC), while civilian protests were able to “humanize” the 52-year war. Through a surge of mass movements in the late 2000s, citizen activism spurred the FARC to declare a unilateral ceasefire in 2015. Similarly, in Syria, civilian groups known as Local Coordination Committees convinced more than 25 Free Syrian Army battalions and brigades to publicly sign codes of conduct regulating their use of violence.

Governments around the world have begun to embrace the importance of psychology in understanding how individuals, communities, and institutions interact. For example, the US Army uses a training video based on Shapiro’s ideas of affiliation and autonomy, and US Defense and Intelligence agencies have funded initiatives to create “influence maps” of groups based on the psychological dimensions of conflict. But we could be doing even more.

Government leaders must continue to support such initiatives and make concerted efforts to embrace the emotional dimensions of conflict, especially when considering whether to intervene or engage with countries with different cultural or emotional concerns than their own. Since identity concerns can prevent groups from making the perfectly rational decisions assumed under most theories of international relations, understanding what actually informs those decisions, and tackling tribal attitudes head-on, can help leaders effectively respond to, de-escalate, and prevent these conflicts.

Sylvie Stoloff is a junior at Harvard College studying Cognitive Neuroscience and Evolutionary Psychology with a secondary in Government. She is interested in behavioral science, specifically with applications to government and international relations, and is currently conducting research in those fields as a research assistant with the Kennedy School’s Decision Science Labs. She has previously written for the student-run Harvard International Review.

Anna Giannuzzi is a sophomore at Harvard College studying applied mathematics with a focus in economics and a secondary in romance languages. She is currently working under Professor Julia A. Minson on a research study regarding human intuition and decision-making. In addition, she has a background working as a Research Assistant at the Harvard Decision Science Laboratory and at Harvard Business School’s Latin American Research Center in Buenos Aires.