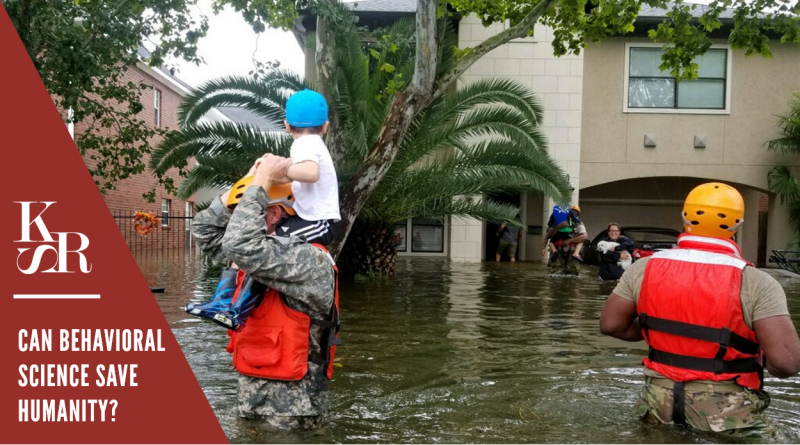 The recent devastation wrought in Texas, Florida, and Puerto Rico by hurricanes Harvey, Irma, and Maria has unfortunately made disaster preparedness a timely topic. Unfortunately, despite national efforts by FEMA, the American Red Cross, and others to promote disaster readiness, a full two-thirds of American households do not have adequate plans or have no plans at all for a disaster. For example, less than half of Florida homeowners have flood insurance; many likely regret that decision in the aftermath of the most recent disasters.

Researchers have wondered why people fail to prepare for disasters—referred to as low-probability, high-consequence events—and have explored various methods to encourage uptake of mitigation strategies. For example, Meyer and Kunreuther at the Wharton School created a computer simulation where players could invest in mitigation instruments for their virtual homes. The results are quite worrisome—even after several rounds of play in which they experienced disasters, there was little evidence that experiencing losses increased players’ inclinations to better prepare for the future.

To improve disaster preparedness, policymakers and NGOs should give more attention to the tools and techniques of behavioral science. In particular, research findings suggest that we could improve the effectiveness of disaster preparedness interventions through the content of messaging communicated to stakeholders, the scope of the preparation efforts we promote, and the timing of the intervention.

The way a message is conveyed can substantially improve the effectiveness of behavior change interventions. For example, receiving a communication that compares your electricity bill to those of your neighbors can significantly change your electricity usage. Similarly, receiving a letter that says “9 out of 10 people paid their taxes on time” encourages the remaining holdout to pay up. In the context of disaster preparation, we could encourage homeowners to better prepare by comparing their readiness with their neighbors’, or by organizing friendly competitions where counties publish the progress their residents are making towards readiness and offer the winning county a prize.

Another way to change people’s disaster preparation habits could be to highlight how being prepared will protect children. In a 2016 national survey, 64 percent of American households were “familiar or very familiar” with their child’s school evacuation and emergency plans. This data offers a bright spot in disaster preparedness literature, especially when contrasted with evidence, mentioned earlier, that a similar percentage of American households have inadequate plans for dealing with disaster. This high percentage suggests parents might be particularly receptive to information framed around child well-being, perhaps through messaging from their children’s schools.

Importantly, behavioral science research cautions against one common messaging frame:  fear. Although instilling fear is an emotionally powerful approach that could lead to behavioral change, we should be cautious because these interventions might backfire. For example, one might think that we should expose drivers and car riders to the gory graphics of car accidents to increase seatbelt usage. While this triggers fear, it actually reduces compliance. This is because a common response is to avoid messages that are emotionally disturbing and personally realistic. This research suggests that we should consider more positive messaging, such as awarded competitions or community events, instead of negative messaging such as threats or gruesome imagery.

In the recent hurricanes, some families in Florida and Texas decided to stay and ride it out despite government officials’ evacuation orders urging them to leave. In the midst of crisis, leaving one’s home can be a paralyzing, difficult decision both emotionally and financially. However, if people prepare for disasters ahead of time, there are easy and cheap interventions that can reduce stress in the heat of the moment. For example, households can assemble an emergency kit weeks or months ahead of time. These emergency kits usually include water, non-perishable food, a flashlight, a first aid kit, and other supplies needed for the first, most difficult hours post-disaster. Many households have assembled these kits for under $50 and avoided the stress and panic of venturing into chaos for last-minute grocery and gas runs.

The timing of a behavior change intervention is also important, as people forget the impact of disasters quickly after they happen. For example, in a study of San Francisco Bay Area residents, the residents report a significant increase in their perceived likelihood of suffering personal harm immediately after a 6.9-scale earthquake, but the level decreased only a few weeks after. Efforts to promote preparedness will need to account for how quickly the public’s sense of urgency diminishes, even for those who have seen disaster firsthand.

Testing interventions in the field

Seeking to test whether applying some of the behavioral science insights above can improve preparedness, Harvard Business School professor Elizabeth Keenan and I considered the effect of narrowing scope and leveraging timing to spur preparedness. Given that an emergency kit is a low-cost action towards disaster preparation and that the recent hurricanes have raised awareness, we wondered if households are more likely to purchase emergency kits immediately after disaster has struck. Furthermore, if we were able to increase purchase of emergency kits, how long would the effect last? Finally, does the proximity to disaster zones increase the likelihood of preparation?

In early October, we ran the first of three studies and found weak evidence that intent to purchase an emergency kit is higher in hurricane-prone areas (especially in Florida and Texas) and lower in less hurricane-prone areas. Now, we are collecting data for the second and third studies to gauge how this pattern changes two to four weeks after the hurricanes. In a separate study, we are also investigating the underlying factors that influence why a person prepares for certain disasters but not others.

This work is only just beginning. The challenge is that we cannot know when the next disaster will strike. The good news is that, with every experiment, we gain new insights about how to nudge the public toward preparation. Encouraging households to take adequate preparations before a disaster strikes saves lives and reduces the suffering caused by disasters. Research from human-behavior fields such as psychology, economics, marketing, and communications can lead the way.

Stephanie Chan is a research associate at the Harvard Business School. She is interested in the applications of behavioral science research. Stephanie graduated from the University of Pennsylvania in 2014, studying psychology and marketing.