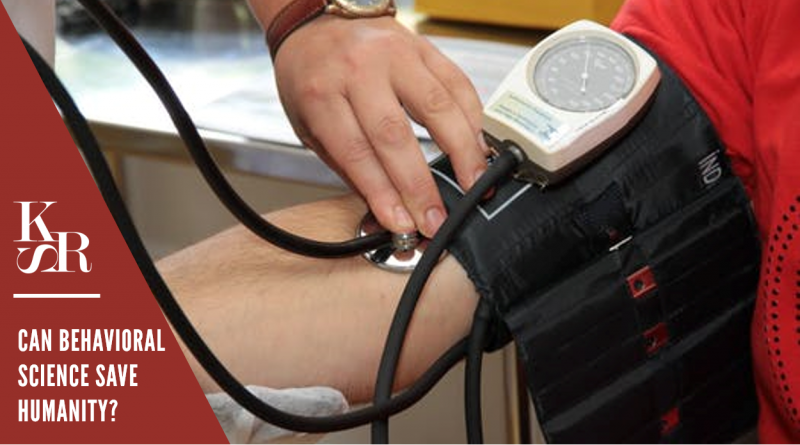 Our lifestyle choices—what we eat, how much we exercise, and whether we smoke— are critical hazards to our health today. For most of us, leading a healthy lifestyle requires overcoming constant temptation in pursuit of a distant, healthy future. Perhaps unsurprisingly, we humans aren’t great at holding back from indulgence, and our health suffers for it. Seventy percent of deaths worldwide result from non-communicable diseases (NCDs), such as heart disease, type 2 diabetes, and most cancers, which are caused or exacerbated by unhealthy choices. Well over half of Americans and Europeans don’t get the amount of physical activity recommended by experts, and rates of obesity have more than doubled since 1980. Tobacco kills up to half of its users, claiming 7.2 million lives annually. That’s the equivalent of the entire population of Hong Kong, every year.

Fortunately, the World Health Organization (WHO) estimates that the vast majority of NCDs can be prevented by eating well, exercising, and avoiding cigarettes. Through their Global Action Plan for the Prevention and Control of NCDs, WHO aims to reduce premature mortality from NCDs by 25 percent by 2025. Likewise, the United Nations resolution on the prevention and control of NCDs stresses the urgency of “multilateral efforts at the highest political level to address the rising prevalence, morbidity, and mortality” of NCDs globally.

Broader use of behavioral science tools could help us reach these goals and stay alive.

Many people actually do intend to improve their lifestyles. There are 97 million dieters in America who together support a $66 billion weight loss industry. Nearly seven in 10 American smokers say they want to quit. Nonetheless, only a small minority of smokers, exercisers and dieters succeeds in durably improving their lifestyles. If we understand the risks of our behavior and genuinely want to change, why do we fail to follow through?

Insights from behavioral science help explain why we have trouble acting on our intentions. Namely, humans have limited self-control and are not fully equipped to take the future into account in our decision-making. Behavioral economists call this tendency present bias: against our better judgment, we choose immediate pleasure over future benefits. Most lifestyle decisions have exactly this intertemporal structure: we trade risk of serious illness for instant gratification, like chocolate cake or a long drag on a cigarette.

The good news is that we are, at times, aware of our limited self-control and take measures to circumvent temptation. For example, some people literally freeze their credit cards in blocks of ice or impose withdrawal penalties on their savings accounts to avoid overspending. Others paint their nails with bitter-tasting cream to stop nail-biting or time-lock their cookie jars to prevent overeating. These measures are called commitment devices, which are defined as voluntary imposed restrictions on future behavior.

Behavioral economics studies increasingly point to the effectiveness of commitment devices in health promotion. For example, via so-called deposit contracts, individuals can voluntarily deposit money that is only retrievable if they achieve certain health outcomes such as losing weight. Two randomized controlled trials (RCTs) in the United States showed that about half of obese people who signed 16– or 32-week deposit contracts achieved their weekly weight loss goals, whereas only a small minority of people in a standard weight-monitoring program did. In a similar study, smokers who tied their own money to the goal of quitting were 30 percent more likely to remain cigarette-free for the six-month study period than smokers without the commitment device.

Behavioral economists have also experimented with commitment lotteries to promote gym attendance. As part of an RCT, overweight Dutch employees entered 13 weekly lotteries and simultaneously committed to attending their company gym twice a week. Lottery winners were drawn weekly, but winners were only eligible for prize money if they had exercised twice that week. After the draw, non-eligible winners were made aware of their forgone lottery earnings, likely leading them to alter their behavior to avoid future feelings of loss and regret. In the end, lottery participants achieved their gym attendance goals 60 percent of the time, compared to a 23 percent success rate in the control group.

Yet for all the success commitment devices may offer, it might be too early to proclaim them the panacea of health promotion. With one notable exception, most commitment devices are made available to research subjects only. Commitment devices remain underused and under-advised by health practitioners—a fact that might be explained by the range of open questions on their implementation. For example, how can healthcare practitioners appropriately diagnose gaps between a patient’s health intentions and their behavior, and assess the appropriateness of a behavioral intervention? Should we be concerned that, like medication, commitment devices generally lose their effect once people stop “taking them?” Given that most commitment devices have been tested in high-income countries, how do we recalibrate and/or retest these tools in low- and middle-income countries where most chronic disease deaths occur? Without answers to these questions, the scale and impact of commitment devices will remain limited to research settings in developed nations.

Countless diseases that once threatened human health are now preventable or curable through medical wonders like vaccinations and antibiotics. Therefore, the greatest threat to our health today is our very human failure to eschew short-term pleasure for long-term well-being. In order to meet the world’s ambitious goals to reduce the NCD burden, policymakers and scientists should invest further in the design and testing of commitment devices over time and in diverse settings—harnessing our “inner demons” for a healthier future.

Koen van der Swaluw is currently pursuing his PhD at Tilburg University (Tranzo Scientific Center for Care & Welfare) and the Dutch Institute for Public Health & the Environment (Department of Health Economics). His research centers on the application of psychology and behavioral economics to public health policy and practice.