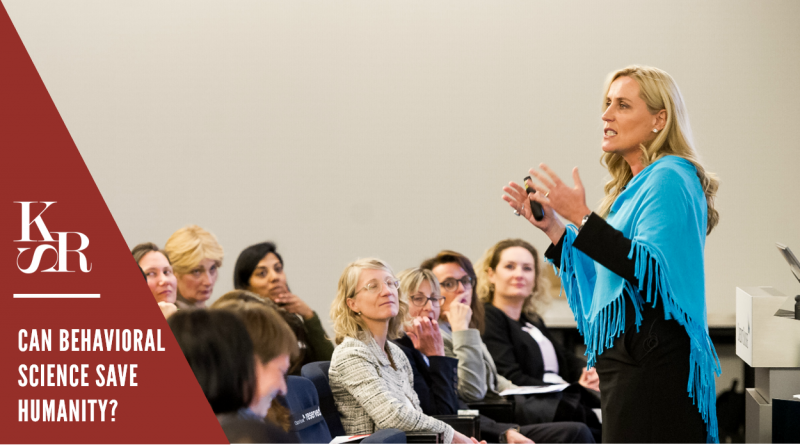 The behavioral science revolution is officially underway. Nudge, one of the discipline’s most influential trade books, is now on more than 750,000 bookshelves worldwide, and its co-author Richard Thaler is a new Nobel laureate. The Behavioural Insight Team’s (BIT) successful effort to encourage Brits to pay £210 million in overdue taxes found its way into a popular episode of Freakonomics. “Nudge units” and efforts to experiment inside government agencies across the United States soon followed, set up by in-demand behavioral science consultancies like BIT and ideas42. Now, even the World Bank, OECD, and United Nations are hip to the idea that easy, low-cost tweaks to the decision-making environment can reap huge rewards for governments and citizens.

To kick off our series Can Behavioral Science Save Humanity? I sat down with Iris Bohnet, Professor of Public Policy at the Harvard Kennedy School, Director of the Women and Public Policy Program, and Co-Director of the university-wide Behavioral Insights Group. Professor Bohnet’s new book What Works: Gender Equality by Design illustrates how the precision techniques of behavioral science can spur progress on society’s most stubborn social issues.

Around the time you first began publishing on gender equality, things didn’t look good. In 2000, workforce participation among working-age women was 77 percent compared to 92 percent among men. Women were making just 73 cents for every dollar earned by men. And women occupied just 12 percent of board seats at Fortune 500 companies. That’s evidence of a really massive social challenge.

How did you think about transforming such a vast and complex problem into something you could tackle with behavioral science?

I think a very helpful insight in behavioral science is that you have to start small. You have to pilot, measure, experiment, evaluate, and then update and improve what you do. Humility is part of the research approach. No behavioral scientist starts with a big scheme for how to transform the world.

[Start] with a concrete intervention—introducing curtains in symphony orchestras and seeing whether that increases the likelihood that traditionally under-represented groups are hired into orchestras. And yes, it’s working. Then take the blind evaluation procedures to other places such as the UK government, which has just introduced a measure to remove names from resumes for civil service positions. Then [take the procedures] to companies such as HSBC, and eventually to the world. That’s how I do research.

Most companies, nonprofits, and government agencies say that they want to create more inclusive workplaces, and many have spent thousands of dollars to move in that direction. Sadly, in your book What Works, you say that most of these programs simply don’t work that well. What’s wrong with traditional diversity and inclusion programming?

The biggest challenge is that we don’t measure enough. I want to qualify what you just said a little. I can’t prove that everything is wrong because mostly we don’t measure. But the few studies that we do have, which have looked at diversity training, are not encouraging.

In fact, just today we had another presentation from the UK government where they tried a perspective-taking intervention to see whether that makes people more empathetic of traditionally under-represented groups—and it backfired. We call this a licensing effect: I might have participated in the training, and it’s highlighting either the stereotypes or the difference between you and me. Now that I feel like I’ve checked the box and I’ve done some good for the world, I can engage more in the bad behavior. So yes, I’m not particularly optimistic that diversity training, as traditionally conducted, will move the needle.

Based on other research in this area, I’d be more optimistic if diversity training had some awareness raising, where we talk about unconscious bias, but then couple it with tools that people can use tomorrow to change meetings, performance evaluations, or to change employee feedback.

Most of our readers are—or soon will be—leading their own organizations. What are two or three concrete things they should do to ensure that their organizations make good on their promise to promote gender equality? And what evidence do we have that those interventions will work?

In addition, it is also behavior—and that’s harder. If you ask me, “where is the research frontier,” [it] is not so much in one kind of process but in what you might want to call culture, which is a very nebulous term. For me, culture becomes meaningful if we can talk about behaviors, such as racist or sexist jokes, or interruptions or “hepeating” (men repeating what women have just shared and getting credit for it). That’s another recommendation that I would have for your colleagues when they start companies: inclusion is important—it is diversity, it is the numbers, it’s equality of opportunity, equal pay—but it is also inclusion. [Make] sure that people can bring their whole selves to work.

Contributors to our Can Behavioral Science Save Humanity? series will explore topics like chronic disease, disaster preparedness, and international conflict—topics not as often discussed in behavioral science circles. What’s one lesson you learned working on gender equality that might help researchers focusing on these other seemingly intractable social problems?

I would offer two insights. One is that social norms are hugely important. Elizabeth Paluck, who is a social psychologist at Princeton, has done some really interesting work in post-conflict countries, for example looking at the Hutus and the Tutsis [in Rwanda] and what kinds of interventions help them start building bridges post-genocide. She specifically looked at a radio intervention, which was a kind of inclusion programming. It turns out that after the exposure in the treatment group, it is not that people’s minds necessarily changed or their beliefs about the other party really changed, but their beliefs about what others believed changed.

Another insight that I took away is the importance of role models. One of my favorite studies is a paper by Robert Jensen, who now is at the Wharton School. He [focuses] on “gendercide,” which is a strange word for a terrible fact:  the United Nations is now estimating that between 150 [million] and 200 million women and girls are missing in the world because of sex-selective abortion or neglect in the first five years. [Jensen] took advantage of the fact that many of the call centers moved into India in the ’90s and preferably hired women. He was interested in the question of whether economic opportunities for women translated into how parents treated their zero- to five-year-old daughters. In many ways, it is totally behavioral because it is not as if these call centers hired millions and millions of women, but they hired a few. All of a sudden you might know somebody, who knows somebody, who knows somebody who works in a call center. He [investigated] this experimentally. He had treatment villages and control villages, and the treatment villages got training for people to go and work in call centers. They also measured survival rates, indices of health, were the kids in schools, etc. And [Jensen] did find a positive impact of economic opportunities.

Marie Lawrence is a second-year Master in Public Policy candidate at the Harvard Kennedy School of Government, Editor in Chief of the Kennedy School Review, and Content Chair of Harvard’s Behavioral Insights Student Group. She previously worked in policy research and communications roles aimed at expanding marginalized Americans’ access to nonprofit services and public benefit programs.