“Gross National Happiness measures the quality of a country in more holistic way and believes that the beneficial development of human society takes place when material and spiritual development occurs side by side to complement and reinforce each other.”

Is a car crash a good thing? How about an oil spill? Most of us would likely agree these are harrowing and unpleasant experiences that should be avoided. From the traditional economic perspective reflected in GDP, however, incidents like these are net positive, as they increase a country’s total production of goods and services when the cars are repaired and workers clean up the oil.

After the Second World War, GDP—the value of all goods and services produced within a country in a given year—became the main tool for evaluating a country’s economy and is today often taken as a proxy indicator for a nation’s success. Yet a growing chorus of experts and citizens believe this metric is too narrow to properly assess the progress and growth of a nation. These critics have turned to the country of Bhutan for an alternative. In the late 1970s, Bhutan’s king, Jigme Singye Wangchuck, shared his vision for a novel way to measure the wellbeing of his country: Gross National Happiness (GNH).[1]

King Wangchuck believed that looking only at GDP was a dehumanizing approach to the process of development. Instead, he wanted to figure out a way to quantifiably assess the happiness level of his citizens. The Centre for Bhutan Studies (CBS) came up with four pillars, thirty-three domains, and over 148 variables to generate Bhutan’s GNH.[2] The center sends out an annual survey that looks at various indices of social and emotional health—including education, access to healthcare, and sleeping patterns—as well as more country-specific questions. Respondents, for example, report their proficiency in traditional Bhutanese handicraft skills and how often they pray or meditate.[3]

The popularity of GNH has expanded beyond Bhutan’s borders, and is now a commonly accepted term amongst economists including Nobel Laureate Joseph Stiglitz and Jeffrey Sachs. Happiness metrics have been incorporated into the Organization of Economic Cooperation and Development’s Better Life Initiative, and GNH is referenced in the United Nation’s Millennium Development Goals and the annual World Happiness Report.[4] Both the United Kingdom and France have now commissioned their own happiness studies similar to Bhutan’s.[5]

The pursuit of happiness is enshrined as an inalienable right in the US Declaration of Independence; yet the government has traditionally not measured happiness at all. At the institutional level, though, studies and resources on happiness are active and abundant. In 1938, the Harvard Study of Adult Development initiated a project on happiness with 268 Harvard sophomores and 456 boys from the Boston inner city. The project still runs today.[6] More recently, in April 2016, the university established the Lee Kum Sheung Center for Health and Happiness to identify and develop a positive psychological well-being index, or “happiness index,”[7] as an instrument to augment the measurement of GNH. These and other research initiatives and their findings have begun to attract the attention of nearby elected officials. The mayor of Somerville, Massachusetts, in 2011 initiated a quantitative happiness survey that was the first in the country to assess residents’ happiness and publish the results in a report.[8]

If understanding and reporting the metrics of happiness on a national level would be helpful, the question is how to generate an effective measurement of well-being. It could be as simple as asking whether someone is happy or whether he or she feels proud to be a resident of the area—questions the Somerville survey poses. Alternatively, there are deeper queries we can make: How much time is a person spending on social media compared with traditional face-to-face socializing? Is he or she able to enjoy the simpler things in life that don’t involve buying or paying for something? It is up to American policy makers and citizens to decide how to measure their GNH most effectively, but devising and reporting these alternative measures alongside GDP could provide a more comprehensive picture of the country’s true success.

Despite being the richest nation in world, the United States is grappling with issues of social inequality, racial tension, and personal life satisfaction. If policy makers can devise a way of empirically assessing social and emotional well-being, like Bhutan has done with its GNH variables, they could craft policies to address some of these deep-rooted societal problems. 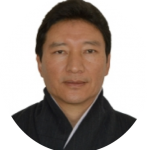 Kinga Tshering is a former Member of Parliament in Bhutan from the Peace and Prosperity Party (DPT). His experience in public service spans more than twenty years as a development engineer, banker, corporate executive, and politician. Kinga is currently a mid-career student pursuing a master in public administration at the John F. Kennedy School of Government at Harvard University as a Ford Foundation Fellow with the Ash Center for Democratic Governance and Innovation.