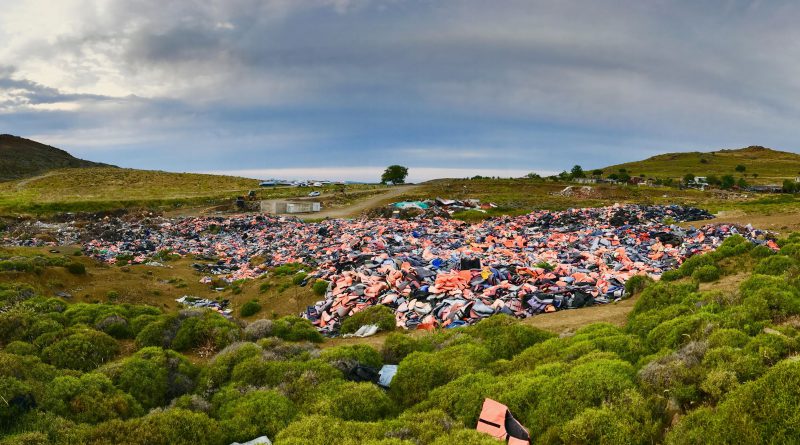 The windy, unpaved coastal road seemed to stretch forever. We were clearly lost, driving as we had been for miles in search of the almost mythical ‘Lifejacket Graveyard’ near Molyvos. We were in Greece as part of a group of 45 student volunteers from myriad countries, professions, and schools across Harvard—tasked with assisting refugees at Kara Tepe, a camp of 900 people on the island of Lesvos.

We were directed to a local campsite and then down a windy dirt road over a nearby hill. As we reached the crest of the hill, nothing could have prepared us for the sheer magnitude of hallowed ground that lay before us. Strewn over ten acres were thousands of lifejackets, piled as high as five meters in some parts, and interspersed with sweaters, bags, shoes, parts of life rafts, broken wooden boats, and even children’s toys. The sight was nothing short of apocalyptic.

Looking on I could not help but think that each lifejacket embodied a story of struggle against all odds, a fight for survival for the 1,300,000 refugees that crossed through Greece. But each jacket also represented a metamorphosis, a shedding of a past life of turmoil in hope for a new one full of promise. Without a doubt this lifejacket graveyard put the European refugee crisis into perspective: existential fear during the precarious sea journey, ephemerally relieved by land-fall, only to be tested again by the perilous trek across Europe or by the specter of deportation. Given the sheer scale of the crisis, where does one even begin to provide hope to these brave people?

After serving for several years as an International Attorney-Advisor with the U.S. Department of Commerce, I returned to graduate school last year to gain a better perspective on how, and in what capacity, I can best lead and serve. While I met no shortage of determined students who had exhibited exceptional service in their lives, I found that many of these students struggled to find a sense of purpose in this time of political and social crisis in the U.S. and abroad. As a direct response, concerned students rallied and undertook a series of bold actions on campus through a variety of service-oriented initiatives.

Having seen the difficulties of transition as an Iraqi-American immigrant, I decided to do my part by joining the Kennedy School’s first student-led service trek to serve refugees. This trek worked with two NGOs: Movement on the Ground (MOTG), which aims to improve camp conditions, from food distribution to energy usage, and Emergency Response Centre International (ERCI), a Greek non-profit that provides 24/7 search and rescue operations, educational programming, and refugee camp coordination.

As members of the ERCI team, we were trained in boat rescue, nighttime shoreline observation to detect incoming boats, and safety/first-aid patrolling in the camp. Using my colloquial Arabic, I took every opportunity to speak with the camp residents, the majority of whom hailed from Syria and Iraq, in addition to those from across Africa and Afghanistan. Through our conversations we spoke candidly about the difficulties of assimilation, the drudgery of waiting, and concerns for an uncertain future. Yet, we ensured them that they were not alone, their plight was not forgotten.

One of the more recent responsibilities of ERCI was teaching swimming lessons to over 75 children. While I wore a thick wetsuit, these children braved the cold waters adorning only what they could find or borrow. I remember Ali, a six-year-old wide-eyed Syrian-Palestinian boy with a glowing smile, sporting his little Dora bathing suit, oversized pink swim cap, and yellow floaters. Without hesitation he dived head first into the frigid open sea to show me his stroke, while only a few feet away was the ominous sight of floating debris from a previous refugee landing. I was simply astounded by the resilience of Ali and other refugee children, who could set aside the unspeakable trauma they had endured to just try to experience the innocence of their youth.

After the trek, Wen Hoe, a Kennedy student, wrote: “We have failed so deeply, so fully. When did we forget that empathy is to stare into someone’s soul, and see a hell that could have been yours?” Wen was not alone in her disillusionment of the raw, uninhibited face of the humanitarian crisis we had just witnessed. While we all saw the importance of volunteering in Lesvos, we also recognized the limitations of our work and the need to do more.

When asked upon my return about how and where one could best volunteer, I replied: volunteer where the need is greatest by contributing your specific expertise. Experience in fields as diverse as law, medicine, child trauma therapy (for which there is an especially dire need), entrepreneurship, education, social work, management, engineering, IT, and trades such as carpentry is equally and extremely valuable. In my specific case, I hope to continue volunteering by providing legal asylum interview preparation and appeals advocacy through organizations such as Advocates Abroad to aid the thousands of refugees held in limbo in Greece and Turkey.

In his May 2017 commencement address at the Kennedy School, former Secretary of State John Kerry urged students to, “never underestimate the power that you have and the extraordinary privilege found in one 7 letter word: C-I-T-I-Z-E-N”. What helped galvanize my own transformation from a dispassionate adolescent to an activated citizen was a belief in the following sequence, which I discussed in a recent TEDx-style talk at the Kennedy School, titled ‘Hope in Infinity’. By inspiring Hope in others, this gives rise to a sense of Purpose, igniting a desire for Action in the service of others. Such compassion will provide further hope, purpose, and service-oriented action that can continuously benefit any and all communities worldwide.

During my time in government and as a policy student at the Kennedy School, I saw how this virtuous sequence is invaluable for enabling change. Yet, being an active citizen does not require curing a lethal disease or single-handedly preventing a conflict. Rather, it can be a series of small acts that provide hope for others. This is exactly how the ERCI started. Panos Moraitis, a seasoned Greek sailor, traveled to Lesvos to do his part in aiding refugees, and seeing the scale of the crisis, immediately bought a rescue boat, SUV, first-aid materials, and founded his NGO to ensure the safe passage of thousands of refugees since late-2015. Indeed, hope galvanized his sense of purpose that led to action, action that later provided hope and purpose to an army of ERCI volunteers, including Sarah Ezzat Mardini, a Syrian refugee and elite swimmer, who saved the lives of those on her own boat, and later returned to Lesvos to lead in the service of others.

So teach, volunteer, run for office, or whatever service you choose. No matter whether you win or lose, reach a broad audience or only a few friends, save one life or many, action in the service of others can inspire hope, purpose and benevolent action that is critical in a world of constant struggle and turmoil. I truly witnessed this first hand on the island of Lesvos.

Hamada Dara Zahawi is an Iraqi-American, former International Attorney-Advisor with the U.S. Department of Commerce. Hamada received his Masters in Public Administration from the Harvard Kennedy School, where he was president of the Harvard Arab Student Association.