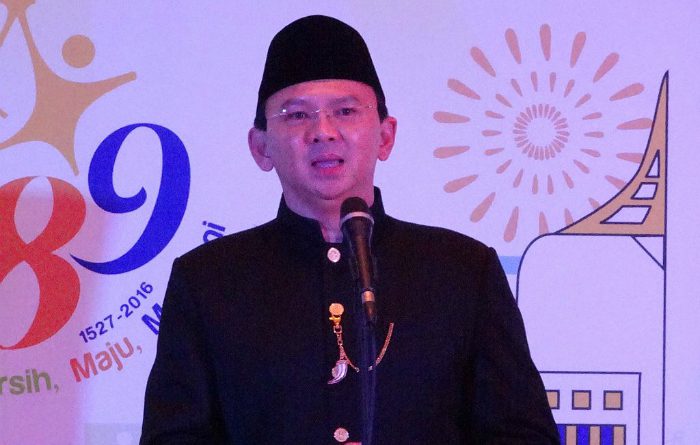 The parallels between May 9th and November 9th are uncanny. Six months ago, I witnessed a man gain the U.S. presidency thanks, in part, to rising racial resentment. Now, I am watching as one of the most inspirational political leaders from my home district of Jakarta, Indonesia, is robbed of his power by a similarly anxious religious and ethnic majority. As despondency sweeps over me again, I wonder, What do we really value in our leaders?

Basuki Tjahaja Purnama, better known as “Ahok,” rose up from deputy governor to governor of Jakarta in 2014 when Joko Widodo, then-Jakarta governor, was elected president. Unlike others before him, Ahok is Chinese and Christian–-a double minority in Indonesia, where over 87 percent of the population is Muslim. Ahok’s election symbolized deeply meaningful progress in Indonesian society for my parents and me. We had never seen someone who looked like us hold an elected position of power. Before Ahok, we never thought it was possible.

Ahok has been a symbol of hope not only for Chinese-Indonesians, like me, but for Indonesians of all stripes who are hungry for change. After becoming governor, Ahok overhauled one of Jakarta’s oldest and most prominent red-light districts and turned it into a family-friendly park. In years past, my childhood home has flooded because of dense garbage that blocked rainwater from flowing out of residential neighborhoods. Ahok led an effort to clear the dump and created a space where families can jog and play soccer. By showing what efficient government service looks like, Ahok inspired me to go back to Jakarta to work in 2013. Such rapid transformation gave me hope that I could see–and effect–change in Indonesia after all.

This week, our collective hope seemed to have been extinguished. On May 9, the North Jakarta District Court sentenced Ahok to a two-year prison term for violating Indonesia’s blasphemy law. Ahok had been on trial since late 2016 on charges of insulting Islam. During his reelection campaign in September 2016, Ahok quoted a Quranic verse to highlight how some religious leaders have justified claims that Muslims cannot vote for non-Muslim leaders. Shortly after, an edited version of Ahok’s speech went viral, inciting many angry rallies against him and exacerbating religious and ethnic divisions in the nation. This tension became the backdrop of the gubernatorial election in February 2017, and Ahok finally lost to his opponent, who was seen befriending Islamic hardliners during his campaign.

While seeing Ahok lose his re-election bid on April 20th was personally devastating, hearing of the court’s verdict on May 9th was another matter. The sentence significantly exceeded what prosecutors had demanded–a two-year probationary period with the possibility of a one-year jail sentence should he commit a similar crime. Instead, the panel of five judges handed down a much harsher sentence, appearing to kowtow to pressure from months of protest by the religious majority.

A biased legal system is troubling, but what most disturbs me is the mob mentality itself. Protestors’ demand for a long jail sentence begs the fundamental question that has plagued me since the U.S. election, which I now pose to my fellow Indonesians:  What do we really value in our leaders?

“Pancasila,” or, in English, the “Five Principles,” form the foundation of the Indonesian nation. As articulated in the constitution, these ideals are the belief in one God, just and civilized humanity, Indonesian unity, democracy under the wise guidance of representative consultations, and social justice for all the peoples of Indonesia. Ahok’s jailing is a direct affront to these principles. We say we value leaders who are wise and seek to unite. Yet, when a figure like Ahok, who within just four years instilled greater integrity in his office and inspired youth to take up public leadership, we respond by imprisoning him. We say we value leaders who embrace civilized humanity. Yet, we elected in Ahok’s place someone who associated with extremists known for using violence to get their way. We say we value leaders who will demand justice for all. Yet, we reject a leader who gave voice to a marginalized 2 percent of Indonesian society. Whose justice is really being served by Ahok’s incarceration?

The EU delegation to Indonesia and Brunei Darussalam posted the following response to the court’s verdict on its website: “The EU has consistently stated that laws that criminalise blasphemy when applied in a discriminatory manner can have a serious inhibiting effect on freedom of expression and on freedom of religion or belief.” In other words, a blasphemy law can be misappropriated as a tool for dismantling equality and progress. I have seen what a leader like Ahok can do for my neighborhood, my city, my country, and my people. The use of a blasphemy law for discrimination against any person, but particularly an effective and inspiring public servant, cannot stand.

As Ahok files for appeal, Jakarta’s court and Indonesia’s Constitutional Court more broadly should seriously reassess the need for this blasphemy law. Indonesia should not be known for religious intolerance or an inability to value good leadership. That is not the Indonesia I know, and I refuse to believe it will be the Indonesia to which I return.

Ketty Lie is a Master in Public Policy/Master of Business Administration candidate at the Harvard Kennedy School and Harvard Business School. A native of Jakarta, Indonesia, she has experience working across sectors, from nonprofit organizations to impact investing. At Harvard, she is exploring workforce development in emerging markets like Indonesia.