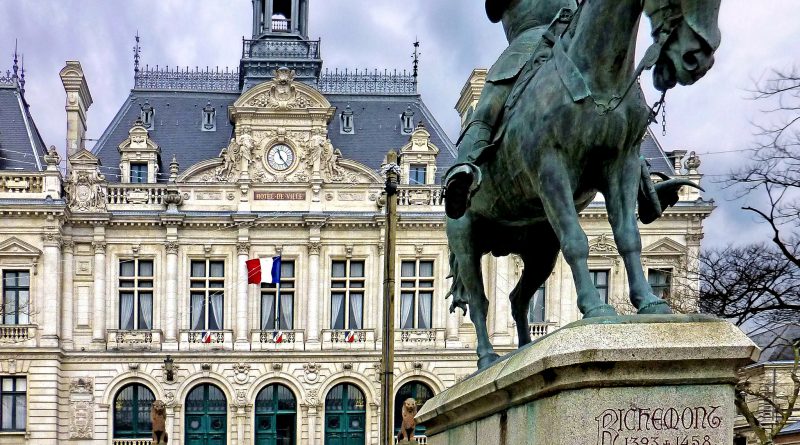 April 23 is a dreary, drizzly New England day. People are lining up alongside the Lycée Francais de Cambridge at 8 a.m. They commiserate over the long line as they wait to cast their ballots in the first round of the French presidential election. This polling location is the only one for more than 8,000 French citizens scattered across New England. Some have driven for hours, stood a few more hours in the rain, gone through a metal detector, and had their passports checked before they were able to cast their ballots and hear those profound words, “a voté.”

France is one of the only countries I know that clearly lays out its values: liberté, egalité, fraternité. The French are deeply divided today over how, or even whether, they can still live according to these values. The two presidential candidates left standing in the final round on May 7 are Emmanuel Macron, an independent centrist, and Marine Le Pen of the extreme right National Front. It is the first time that the National Front has had a true fighting chance at the presidency. The huge traditional parties of Socialism and Gaullism were crushed in the first round on April 22.

As a volunteer for the French Consulate, I check off names of people who had been born in Bretagne, Boulogne, Isère, Normandie, and Toulouse but also Senegal, Syria, and French Polynesia, all with the same burgundy-colored passports. Some have thick American accents when they speak French, others have expired passports with hand-written information inside. Almost all clutch the flimsy, poorly-laminated consular card that allows them to vote. Parents show up with their children who are old enough to vote but who have no French papers. The parents point to their children’s names written in faded ink, the accompanying infant photos and then to their grown children standing next to them. I shake my head. “We don’t use these papers often,” one woman shrugs.

The French consulate says they haven’t seen a turnout this large in New England in 15 years. It could have been more, they say, if people had been allowed to vote online. But a few weeks before the elections, we received an email that the risk of hacking was too high, so online voting had been cancelled. By the end of the day, about 45 percent of the 8,000 registered had voted. Emmanuel Macron was in the lead with over 30 percent, followed by Francois Fillon of the Republican Party and Jean Luc Melenchon of the far left party, La France Insoumise. Marine Le Pen got a mere 2 percent.

I was born in Somerville to a French mother and an American father. We moved to France when I was a year old, and lived there on and off till I was 18. Growing up, I heard about Jean-Marie Le Pen, the father of the present candidate and leader of the frightful National Front. My father would joke that he’d get kicked out of the country if Le Pen ever came to power.

I would catch glimpses of Le Pen on television, his fist perpetually jabbing the air, his mouth in a contorted scowl. A recurring holocaust denier, he was the thorn in France’s side as it tried, poorly, to come to terms with its past. Le Pen was a national joke, a bad dream, but he seemed to perpetually lurk in the recesses of French consciousness. The closest he got to winning was in 2002, and his freak appearance in the second round of elections drove voters into a frenzy. In the second round, he lost by a resounding 82 percentage points to Gaullist Jacques Chirac, enough, we thought, to send him packing.

But in this election, his ghost returns. His daughter Marine Le Pen has doggedly tried to pull her extremist party to the center, toning down racist rhetoric and striving for broader respectability. Her success is now a real and scary possibility.

I have lived outside France for a decade, but I deeply identify with its dark humor, view of universal healthcare as a right, and love for life beyond work. I am one of the 1.6 million French expatriates living abroad, according to the latest Foreign Ministry figures. In that time, the National Front has grown with every recession and every terrorist attack. The National Front has gotten younger and more feminine, but it is still blond and still white. Marine is more astute than the old man—she has even kicked him out of the party, and, like many other right-wing politicians, cloaks her rhetoric in patriotism, sovereignty, and security.

I received a pamphlet with her political agenda after the first round: it is deliberately devoid of overtly racist or anti-Semitic language, but she calls for fighting radical Islam and capping immigration at 10,000 people per year. Her campaign slogan? L’enjeu: la France et sa civilization. What’s at stake: France and its civilization.

In November of 2015, days after a deadly terrorist attack ripped Paris apart, I had to rush home to France because my grandfather had suddenly passed away. The son of a World War One fighter, and the brother of a World War Two fighter, Jean escaped war himself because he was too young. A teacher at the age of 18 and a socialist at heart, he was a part of the proletariat France that lived through the German occupation on sheer grit.

As my sister and I crawled through traffic on the Periphérique surrounding the traumatized capital, I read National Front posters plastered beneath highway bridges, “100 percent Francais, 0 percent immigration.” After the burial in Andilly, a small town in western of France, cut off from the Internet and international news, I read the local papers—stories reporting Jewish cemeteries defaced with the swastika and mosques receiving bomb threats. None of this made national news. I am glad my grandfather didn’t have to witness this ugly chapter in French history.

Marine wants to protect France and “Frenchness” because she claims they are no longer safe. According to reports in the French media, she wants to ban the Jewish Kippa and the Islamic headscarf from all public spaces, monitor imams at French mosques to crack down on Islamists, and welcomes a ban on Muslim immigrants after Trump’s executive order. Marine may not go as far as her holocaust-denying father was, but she recently claimed that France had no part in rounding up 75,000 Jews and sending them to gas chambers under the Vichy government. She wants to end access to education for children of undocumented immigrants and teach the love of France in schools. Marine has also declared that dual nationality with ‘extra-European’ countries would be revoked, because, she asserts, people could really only have one nationality. And yet, after the results of the first round, she called upon all French people, no matter their origin, to vote for her.

I heard this week that my 96-year-old grandmother Henriette who still lives in Andilly voted for “this young man,” as she calls Macron. Meme Henriette has lived through two world wars, suffered under German occupation and still has not succumbed to the cynicism and xenophobia of the extreme right. Macron promotes a France that is hopeful, inclusive, and pro-Europe because, as he says, we are in it. His vision is one where I feel at home, accepted and proud, even if I am thousands of miles away. My Frenchness, and that of my non-Christian, non-white French friends would not be at stake.

So this weekend, as millions of other French citizens and I head back to the polls, France and its noble values hang in the balance. May liberté, egalité, fraternité triumph.

Juliette Keeley is a French-American second year Master in Public Policy student at the Harvard Kennedy School, where she was co-chair for the 2017 European Conference at Harvard University and communications chair for the HKS Francophile Club. Juliette’s focus is on applying quantitative analysis to social policy: how to design and evaluate programs to better serve people.