Home > Articles > The Stories that Saved the Affordable Care Act 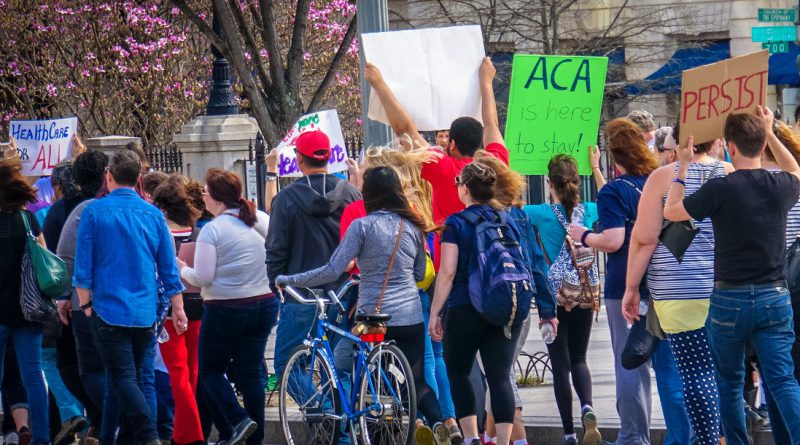 “I think I’m going to start with Fred.”

I nodded. “That makes sense.”

Fred was also a tried and true opener. It was a little weird, grabbed your attention, and then gave you a bridge into the real story about Nathan’s health insurance. Nathan even described Fred as living “rent-free.” The guy had a tumor, and the worst part was that it was a mooch. Classic.

Luckily, the only space that Fred occupied today was a few lines in Nathan’s opening remarks at the U.S. Department of Health and Human Services. Nathan was helping Secretary Burwell kick off the fourth Open Enrollment for the Health Insurance Marketplace.

Nathan was one of the people who had volunteered to tell their story about the Affordable Care Act. Throughout my time at HHS, we turned to them constantly to bring opaque and wonky discussions of premium growth rate and cost sharing back down to earth. What we may not have realized until recently was that their stories – and the power of narrative in policymaking – could very well have saved the entire law.

Nathan and I had grown up together in a small city in southwest Virginia called Salem. He lived there now, working as a caregiver to his two clients – one with cerebral palsy, and one with autism. Like most caregivers, Nathan’s job title covered at least five other roles. Depending on the day, he could be a nurse, a cook, a housekeeper, a personal trainer and a secretary – at a pay that was far less than any one of those.

All of those jobs and the drive had left him a little groggy that morning. So I helped him put a few final touches onto paper, and gave him some tips and tricks I had learned in speechwriting. By this point in the process, you’re usually down to two: slow everything down, and don’t forget to breathe. Because everything else tends to happen so quickly.

Secretary Burwell arrived. She chatted with Nathan. The doors to the auditorium opened, and there he was at the podium in front of about a hundred reporters, consumer advocates, and HHS staff – all streamed live on the MTV of Washington, C-SPAN.

A little after the event, a reporter emailed a question to our press secretary.

“Hey, can you send me Nathan’s email address?” he asked. “I was busy writing my column – I didn’t realize there was this guy in front of me telling his story. I wanted to drop him a note and apologize.”

It was a touching gesture. And a pretty apt metaphor.

The Affordable Care Act was one of the most sweeping and complex reforms of American social policy in at least a generation. But too often, that sweep and complexity overshadowed what it meant to individual people.

That was entirely understandable. The large-scale changes deserved the coverage they got. Not only did the law cover 22 million people, it also introduced new and radical protections for every American, while helping to historically slow growth in health costs.

In essence, the law was based on two fundamental ideas. First, a society is better off if more people have health insurance. And second, if you want to actually bring down costs in health care, you can’t just shift costs from the federal government onto states or families. You need to invest in new ways to provide better care. In the long run, healthier people mean lower costs.

But all of this came into a system that was already running. It was an incredibly complex challenge – like building the plane while flying it, except that most people were pretty content in the seats they had. When the law passed, about 85 percent of Americans who had health insurance were satisfied with their coverage.

The Affordable Care Act was also broader than past reforms. Medicare and Medicaid had only reached certain segments of the population. The Affordable Care Act touched both of those programs, as well as the entire private health insurance market. But this very complexity clouded the simple reality of what the law did for people’s lives.

Here’s Nathan’s story – first, in numbers. The surgery to evict “Fred” had left him with a mild form of narcolepsy, and the medicine for that cost $1,203 every month. Before the Affordable Care Act, Nathan’s pre-existing condition confined him to a plan with a premium of $483 every month, and a deductible of $5,000. But thanks to the law, he knew that no insurer could turn him away because of his pre-existing condition. He found a plan that dropped his premium to under $64 and his deductible to $850. His prescriptions now only cost a $10 copay. Financially, he could breathe again.

But what did those savings really mean? For starters, it meant he could keep doing a job that brought a sense of purpose – a caregiver for people with disabilities. It meant that once in a while he could treat one of his clients to a dinner out, and they could swing downtown to catch the newest comic book hero flick. It meant he could collect his thoughts over a cup of hot chocolate, since coffee wasn’t his thing. It meant he could plan a future beyond the next paycheck.

This was the biggest lesson of the Affordable Care Act. Policy, in the final analysis, is a human endeavor. The most important part of policy is what the ideas and proposals on spreadsheets and white papers mean for a family’s future. Those ideas have consequences.

Elections have consequences, too. A few days after inauguration, I was meandering through a stale and cold National Mall. I felt a bit listless. It seemed like years of work were lost. People like Nathan, whose stories my former colleagues and I had helped share, came flooding back. They asked what would happen now. I had no idea.

Nathan didn’t have any questions. Just an update. He told me that a couple of weekends ago, he, his mom and a few friends sat down for an hour with their Congressman, Rep. Morgan Griffith (R-VA), to explain what the Affordable Care Act meant to them. It was a cordial chat, but not entirely satisfying. So the next weekend, he hit the road. Together with some friends at the group Virginia Organizing, he joined 25 to 30 other people in a protest across the street from his Griffith’s office in Christiansburg, Virginia.

What drove Nathan is the same force that compelled Jessie to speak up about her values in Tennessee, and drove Kati to confront her Senator in Arkansas. It’s what inspired countless people to make their voices heard in town halls and meet-and-greets. It’s why calls on the Republican alternative to the Affordable Care Act ran, on average, 50 to 1 against the bill. In the end, when the bill was pulled from the floor, there were as many moderate Republicans who had backed away from the bill as members of the far right Freedom Caucus.

That’s why the Affordable Care Act has survived. It has made a real impact in people’s lives, and those people have stories to tell. Stories like Nathan’s call us to measure our policies to our values, and hold our representatives accountable for the difference. That’s the power of narrative in policymaking.

I may never understand why the wealthiest country in the history of the world forces cancer survivors, the sick, and the poor to protest and plead, organize and mobilize, all to get the care they need. I may never understand why the institutions we’ve built aren’t strong enough to protect them. But I do know that when they speak out – when we all speak out – the system still responds. Nathan taught me that we’re strong enough to protect each other.

Brian is a Policy and Communications Advisor at Aledade, Inc., a health care startup in Bethesda, Maryland. He recently served as the Director of Speechwriting at the U.S. Department of Health and Human Services. He earned a Masters in Public Policy from the Harvard Kennedy School of Government in May 2014.