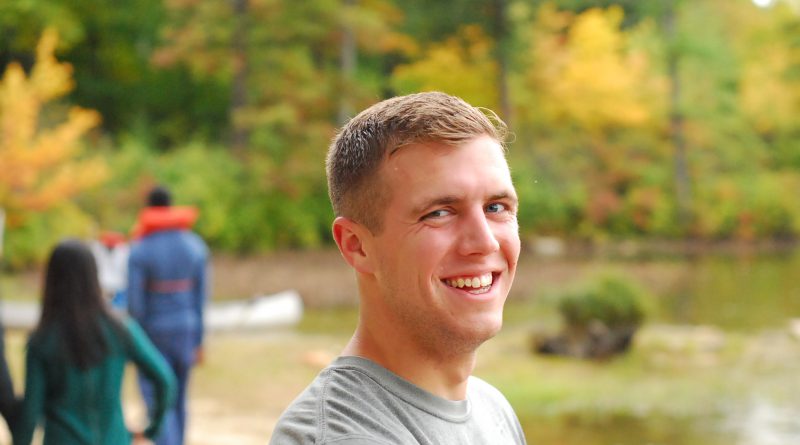 At a campus like Harvard, it can be hard to find a conservative millennial. I initially reached out to Steven to discuss what it was like being just 23 years old and already a Masters student at HKS on a fellowship through the Air Force Academy. We met at Algiers Café, and the waitress knew him by name. The conversation that followed was about more than just about age or military background – but how family, religion, and a classical education shaped his worldview to be more conservative than those of his HKS peers.

This interview is part of a multi-part series with students taking on JFK’s motto, “Ask what you can do.” It has been edited for brevity and clarity.

Many people might be surprised to hear you’re just 23 years old and already a Harvard Kennedy School student. Tell me about how you got to HKS.

It was part of a process that the Air Force Academy has set up for us. We send three to five people here every year… Career-wise, it’s the best move. I want to work in the development field—the intersection between security and development, especially in Africa.

Did you always know you’d want to enter the development sphere after the Air Force Academy?

I realized it pretty early on. I’d been on mission trips, service trips in Central America. I care about the environment, and other people, and Africa, because of my sister [who’s adopted from Ethiopia]. Then, I got randomly placed in French…I just thought, “Wow, this kind of makes sense.” Then I went to Africa [at the] end of my freshman year in Togo. I got hooked.

You’ve mentioned you have more conservative views than other students. How did you realize this, and how do you think about your politics a semester later?

I realized it mostly through class and talking to people in general. I knew Harvard would be more liberal than where I came from – a military school – but I didn’t expect it to be 98% “very liberal.” It’s way harder to have a voice, even if what you’re saying is valid, because most people disagree with you. If there’s no one there to second your opinion, it’s just harder to make a legitimate argument.

It’s taught me a lot about humility.

Do you feel like people have been humble too, trying to learn from you as well?

Everyone’s been really nice, but people haven’t been generally interested… The most frustrating thing is the underlying assumptions. Why do we have classes that assume a socialist democratic theory of government is the right way to think?

I really believe this: if the classroom were 60% liberal and 40% conservative, there could actually be a constructive discussion. If I talk in a class, I get 15-30 seconds to talk, and the professor has to call on other people – but all those other people support the other side. It’s like six minutes to one side, 30 seconds to the other side. So then you could see how what I’d say could very easily be misinterpreted.

Some students have come up with ideas and proposals for HKS to include more conservative voices. What do you think of them?

I think a lot of it comes down to admissions, honestly. I know there are a lot of smart conservatives out there. The admissions office has obviously done a great job integrating the homosexual community into HKS – to an extreme extent, where there is a disproportionate amount more homosexuals in the classroom. There are like 10 in my cohort of 60 people – that is not even close to the general population. But there are two conservatives out of 60? That’s an admissions problem, not an individual professor’s or an individual policy’s problem.

I can’t believe that 95% of the really smart people in America are all super liberal. I just don’t buy it.

I think it’s because we drive the really smart conservative people to go to these very small, insular institutions – a lot of them Christian, Catholic. Unfortunately, a lot of people who are conservative politicians come from [these schools] and aren’t exposed to a liberal elite philosophy, so how are we surprised that when they go into office, there’s this partisan divide?

I don’t know how Admissions works. Maybe it is totally politically blind; maybe it’s just self-selection. But if you’re going to bias gender, sexual orientation, and race – why not bias on political preference, too? The diversity that matters in a government is your worldview, not necessarily what you look like.

Obviously, our worldviews are shaped by all those other things we mentioned. And in reality, all of them do matter. I’m just saying you should not exclude one.

You said you grew up in a military family. How does that affect your worldview?

The three things that shaped my worldview the most were my family (I have six siblings), religion (I’ve grown up Christian my whole life…so I really resent hatred against the conservative evangelical culture, because I think most people don’t understand what true Christianity is), and my classical education. A lot of classical thought is inherently pretty conservative.

Going back to the Christian aspect – what is a “true Christian” and what isn’t?

A true Christian is someone who loves God with all their heart and loves their neighbor as themself. That’s the golden rule in the Bible.

A lot of Christians – “Christians” in quotation – say you can’t be Christian if you’ve had an abortion. I don’t believe that. You can be a Christian whatever you do. Maybe you don’t agree with certain government policies, but that’s very different than labeling individuals who do something you disagree with as going to Hell, or [being] a bad person. I think that labeling is very non-Christian because Jesus hung out with every type of people – prostitutes, homosexuals, sick people, government officials, everyone – and he loved them all.

Shifting gears, I understand you’re a bit of a celebrity in Algiers Café. How did that come to be?

Oh yeah. Algiers and Andala are both owned by the same Palestinian owner. My friend and I have smoked hookah a decent bit in the past for fun, and we got to going [to Andala] two or three times a week.

If I can learn about other cultures without traveling [to other countries], why not? When you’re in a global city like Boston, there are so many opportunities to learn…It’s probably been the highlight of being in Boston — that community.

The motto of [my] church is, “Live like Jesus.” If you’re going to live like Jesus, you’ve got to talk to all types of people.

Finally, you’ve mentioned your classical background. What values do you take from that?

I’m very influenced by the values of hard work… The Lockean idea of [property] is all about how we work hard. But I’m also influenced by modern books like Putnam’s Bowling Alone that say we need to re-establish community. It could make a huge difference in the direction of our country. That is why [Alexis] de Tocqueville is so important to me. He talks about community all the time. The things that really support community are religion, family, and local and state government.

There’s a way to combine conservative and liberal thought to serve people better. In the middle is, “How do you reconnect families, states, churches? How do you revitalize them?”

In federal policy, we never give churches a voice. In schools like Harvard, religion can never enter the conversation… But people who are active in religion – whether they’re Muslims, Hindus, or Christians – those are communities that are established. And if you could link the communities to each other, you could have amazing social policy.

Andy Vo is a second-year Master in Public Policy student at the Harvard Kennedy School. He is the co-chair of the LGBTQ Caucus and a founding member of the Live Poets Society, a spoken word group at HKS.