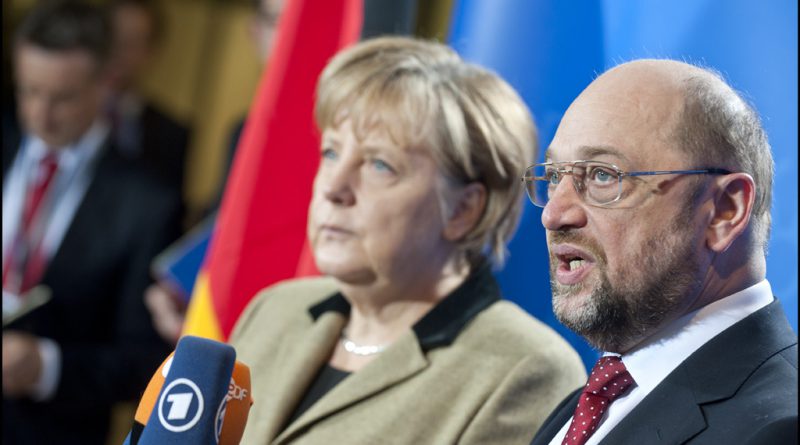 Yes, Angela Merkel may lose power this year. No, it won’t be like Brexit or the United States presidential election.

After the recent turmoil around Brexit and the administration of President Trump, eyes are on the French presidential elections in the spring and the German federal election in the fall. With Chancellor Merkel as a symbol of stability, many are worried about her losing the chancellorship, or even the far-right “Alternative for Germany” (AfD) seizing power. Polls hardly give people any comfort – who doesn’t remember pollsters clearly favoring Britain’s remain or a Clinton presidency? So how likely is it that Merkel will be replaced as chancellor of Germany? Currently, it seems somewhat likely. However, if Merkel loses power, her successor will not come from the far right, but the center-left. And he would be benign.

One major factor for this is Germany’s parliamentary system: Citizens do not vote directly for a chancellor, but for a party whose frontrunners contest for the chancellorship. Election outcomes thereby determine the seats parties have in the German Bundestag – the body electing, overseeing, and potentially ousting a chancellor. Germany has not been ruled by a single party since World War 2. Chancellors instead craft coalitions to secure a majority, typically between one of the two large parties – the center-right Christian Democrats under Merkel or the center-left Social Democrats – and one small party (historically the Liberals or the Greens). On a side note, the Christian Democrats are actually a two party union: The Christian Democratic Union and the Christian Social Union.

The German Bundestag additionally has been trending toward more parties: in the upcoming election, five or six parties are expected to enter parliament, up from three in 1980. Also, while the far-right AfD may boast approval ratings above 20 percent in some districts, it only polls between 9 and 14 percent nation-wide. These factors make it fanciful that Germany will wake up to a far-right majority taking power. Even more, every mainstream party has ruled out a coalition with the AfD. As these coalition announcements are taken seriously, it is unlikely to see the German far-right involved in a German government in the near future.

This shift is attributed to Schulz and his background. After overcoming depression and alcoholism, Schulz worked his way up in life without a university education. This background has helped him to connect and be credible with workers and the middle class – voters the center-left Social Democrats consider their main constituents. Politically, Schulz was a small-town mayor in Germany before entering the EU parliament in 1994. He steadily increased his standing in the parliament until becoming its president in 2012. Under Schulz’s leadership, the EU parliament saw a marked increase in power, with Schulz becoming a respected and well-connected power broker in Brussels. Schulz is also uninvolved in the Grand Coalition under Merkel and is therefore able to credibly oppose the status quo in Germany and promote alternatives.

So what are the consequences if this “Left Alliance” succeeds and Schulz replaces Merkel? First of all, Schulz is staunchly pro-European: He believes that the EU “should have introduced a political union together with the euro” and supported the idea to mutualize sovereign debt across the EU through so-called “Eurobonds”. Schulz also champions policies that end austerity in Europe and address the refugee crisis on a European level. Domestically, a Schulz government is likely to promote infrastructure investments and drive social reforms, such as gay marriage or drug decriminalization.

Does that mean all is well in Germany? Sadly, no. A continuation of the Grand Coalition would further strengthen the small parties, especially on the right and left fringes. Austria serves as a cautionary tale, with an ongoing rule of Grand Coalitions almost sweeping a far-right president into office in 2016. A “Left Alliance” led be Schulz may be unstable, due to its composition around three parties and the aforementioned policy differences between the “Left” and the Social Democrats. This could lead to a government crisis and potentially early – and more contentious – elections before 2021. Schulz and his aforementioned solidarity towards Europe and refugees could spark a nationalistic “Germany first” backlash in parts of the electorate. Sentiments like this would further strengthen the far-right AfD in their goal to establish itself as right alternative to the Christian Democrats. This development is also underpinned by the AfD entering the German Bundestag for the first time, ending a sixty-year tradition where no party established itself on the right of the Christian Democrats.

As problematic as these scenarios may be in the long run, they only start playing out after the upcoming election. Germany can look forward to an interesting campaign season without having to fear a populist takeover in September.

Thomas is a Master of Public Policy student and McCloy Fellow at the Harvard Kennedy School. After growing up in Germany, Thomas studied Management, Finance and Law, for which he also lived in China for 1.5 years. Before coming to HKS, Thomas worked as a management consultant in the Middle East for 2.5 years. He advised public sector entities on economic and social reforms, as well as private corporations on their strategies.