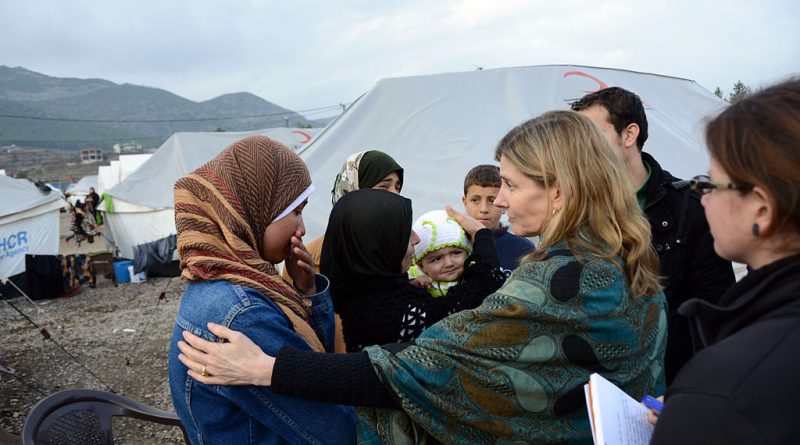 Syrians, not too long ago, were a nation known for their rich cultural heritage, commerce, and diversity. Their country was home to one of the world’s ancient civilizations, and even in the 20th century it was frequently featured as an exotic tourist destination. Today, only the remains of many historic cities and UNESCO World Heritage sites can be found. One of the world’s oldest commercial and industrial cities, Aleppo, has been turned to rubble by shelling and air raids.

The country has been the center of a merciless humanitarian crisis for its sixth consecutive year, lasting longer than the First and Second World Wars. The ricochets of the conflict have reverberated far beyond the country’s borders, spilling nearly 5 million refugees over to Turkey, Lebanon, Iraq, Jordan, Saudi Arabia, and Egypt, of which less than 1 million have requested asylum in Europe and only a fraction have made it to the United States.

Achieving peace and stability for Syria is a distant aspiration for many, especially when the conditions necessary for such a breakthrough have not been laid out by any of the partaking countries in spite of numerous attempted ceasefires, rounds of peace talks, and diplomatic conferences.

Perhaps the underlying reason why the situation with the Syrian Civil War only ever seems to deteriorate is because it has turned into an entangled battle of many parties rather than a conflict between two opposing sides. The civil war has attracted external powers’ interventions, which have angered those who believe that these foreign powers are only pursuing their own interests.

The world has witnessed various acts of bloodshed as a distant echo of the Syrian crisis and a closer reflection of its own position and importance in the conflict. For example, the assassination of the Russian Ambassador Andrei Karlov in December 2016 displayed the vengeance of a terrorist as he shouted, “Don’t forget Aleppo! Don’t forget Syria!” Across the Atlantic, the appalling Orlando nightclub shooting became the deadliest terrorist attack since the September 11 attacks; in this case the terrorist told the crisis negotiator that his actions were triggered by the U.S.-led interventions in Iraq and in Syria.

The growing tension in the West and the insecurities that arise from the extended Syrian Civil War contribute to the formation of a domino effect in which the West’s involvement in the Syrian conflict is used as an excuse by the terrorists-to-be to act in retaliation, which then leads to anti-immigrant sentiment across Europe and North America. This empowers populism to misuse Islam as a punching bag for the ills of society and generalize Muslim refugees as potential terrorists.

President Trump is justified in prioritizing the security of his country, but including policies such as the temporary travel ban that specifically excludes immigrants and refugees of a particular nationality gives an impression that he is approaching protectionism as a political ideology rather than a strategic framework aiming for a solution. The result sees our policymakers acting on the effects of terrorism rather than the actual causes of it. What is overlooked here, then, is how such attitudes give shape to the growth of extremism rather than to its prevention.

In the Middle East, many extremist groups like the Islamic State and Al-Qaeda would like to see Syria ravaged by chaos in order to gain strongholds in the region, but they also want to undermine the basic tenets of Western political norms and social values. Demagoguery and increasing levels of intolerance and xenophobia in the West are the wedge the extremist groups are driving for: establishing prolonged sectarian wars across the Middle East is a way to spread their extremist ideologies and gain ground to continue fighting. But their true strength lies in their ability to use terror as a tool to create an overwhelming sense of fear and suspicion in the Western societies, to the point where they have no other choice but to detach themselves from the Muslim community, leaving Muslims without a place to feel welcomed. And while all this is happening, we are presenting the Islamic State with an opportunity to fill the vacuum and advance their interests in the shattered region.

In reality, however, placing a strong emphasis on migrants and refugees from Muslim countries may offer a temporary peace of mind and perhaps even momentarily freeze the threats our society may be facing, but none of it will provide an efficient, abiding solution to fighting terrorism that we can rely on in the long-term. If all our efforts go to implementing policies that end up segregating Muslims from the rest of the society rather than finding a strategy to eliminate extremism, the conflict in Syria will be prolonged indefinitely, the human and economic costs will accumulate to unsettling levels, and the threat of terror will inevitably increase. The situation will be aggravated by the fact that the longer the crisis lasts, the longer we will cover it in the media and inadvertently provide terrorists with publicity.

What can be done, however, is to first illuminate our strengths as a nation, rather than giving in to partisan politics: we need to be able to make implementable and effective policies to restore the unity and the spirit of our own respective states that have, in the wake of recent events, seen more division than anytime in recent history.

Finding common political ground for our domestic disparities is crucial before we can hope to make conducive political decisions to mend Syria. Only then can we proceed to hold concrete diplomatic negotiations including all the affected parties in order to untangle various aspects of the conflict. By choosing to shut out Syrian refugees and refusing aid for those in need, we risk being counter-effective and contradictory, rejecting the very people whose country we are trying to save.

Thus, what we need is precision when it comes to dealing with Syria and its refugees: we cannot categorize all its Muslim refugees as potential terrorists, all the while spending billions in trying to resurrect what is left of Syria. If we put all our focus on refugees rather than on what causes them to become refugees, we unintentionally win time for the extremist groups to further enhance their operations and advance their agenda. If we do not act on this issue now, we will have a much more persistent and serious threat to deal with.

Ana Diamond is a final year Film and Media student at King’s College London, with a study abroad period spent at the University of California, studying global media management and cultural diplomacy. Having worked with the United Nations and the European Parliament, as well as taken part in various projects in more than 30 countries, Ana is passionate about international relations, public diplomacy and information economics.