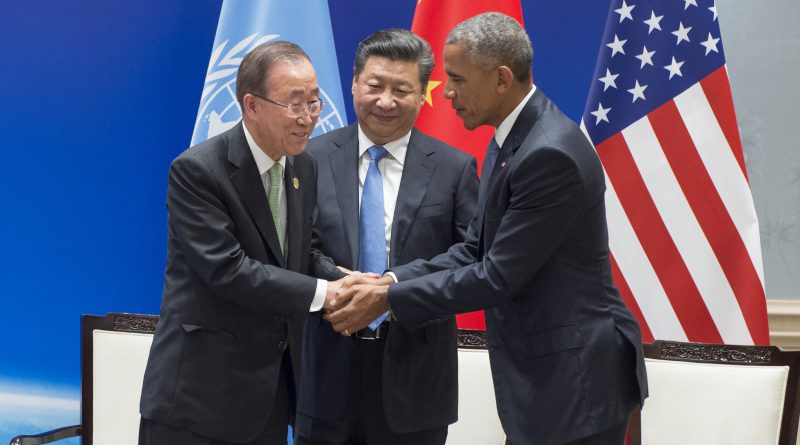 If one takes stock of the present disorder in world affairs, the verdict on President Barack Obama’s foreign policy would seem self-evident: it was a failure. Critics would adduce a long litany of examples—the weakening of transatlantic ties, the disintegration of the Middle East (with particular focus on the horrors that have befallen Syria), the resurgence of China, and the revanchism of Russia—to support that judgment.

There are at least two difficulties with these sorts of critiques. First, they exaggerate U.S. influence: while the United States may be the world’s most powerful actor, it is only one of an infinite number of actors—a reality that nostalgic invocations of U.S. “hegemony” and “unipolarity” tend to discount. Reflecting on President Obama’s legacy, the Economist observed that “even the most powerful leader in the world—a leader of rare talents, anointed with a nation’s dreams—can seem powerless to direct it.” The U.S. can neither constrain the growth of other countries’ economies and military capabilities nor halt the diffusion of power from state to non-state actors.

The second problem with the aforementioned critiques is their indulgence of hypothetical thinking: if only I had been in power, or my proposals had been heeded, this or that outcome would not have prevailed. But those who pose counterfactual challenges do not bear the burden of demonstrating that their own policies would have worked; they merely need to highlight the shortcomings of the policies that were actually implemented. Thus, in retrospect, the Obama administration’s detractors argue that they could have prevented Russia from hiving off Crimea or Syria from devolving into carnage. But we should be wary of confident retrospectives. Walter Russell Mead, a noted scholar of U.S. foreign policy, observed in 2004 that “[f]oreign policy is hard. It is hard to plan and execute it well, and it is almost as hard to oppose a foreign policy effectively, intelligently, and sensibly.”

Obama is “best understood as an ideological liberal with a conservative temperament—somebody who felt that…the country’s long-term foreign policy goals could best be furthered by short-term retrenchment,” Gideon Rose contended in Foreign Affairs near the end of 2015. Even a country of surpassing influence cannot escape the necessity for choice or the limits of power. In Europe, for example, the Obama administration pushed back diplomatically and economically following Russia’s incursion into Ukraine, but was not prepared to countenance an armed confrontation over a territory, Crimea, that does not constitute a U.S. national interest.

In the Middle East, it concentrated on countering the Islamic State, expressing wariness over protracted military interventions in the vein of Afghanistan and Iraq. That caution was justified: when it did intervene in the region, after all, it achieved dubious results. Last April, Obama said that his biggest mistake was “failing to plan for the day after…intervening in Libya.” The administration’s limited attempts to equip anti-Assad forces in Syria also bore little fruit. The difficult reality is that there is little the U.S. can do to arrest the present disintegration of the Middle East, a phenomenon borne more of internal weakness than external actions.

The Obama administration correctly prioritized the Asia-Pacific, which is home to over half of humanity as well as five countries—Australia, China, India, Japan, and South Korea—that are among the world’s top fifteen as measured by economic output and defense spending. While critics argue that it did not do enough to advance the rebalance, few would dispute that the evolution of world order will increasingly ride on that of the Asia-Pacific.

President Obama often stated his conviction in America’s indispensability to world order and affirmed his confidence in the world’s long-term trajectory towards greater wealth, health, and security. But as a student of Reinhold Niebuhr, the esteemed realist theologian and ethicist, he appreciated the limits of human agency: “[T]here’s serious evil in the world, and hardship and pain,” he told New York Times columnist David Brooks in early 2007, when he was campaigning for the presidency. “And we should be humble and modest in our belief we can eliminate those things.”

An appreciation of limits is not an alibi for inaction, but instead a prerequisite for the prudent use of power. Obama believed that investing in America’s economic foundations, pursuing multilateral diplomacy more aggressively, eschewing large-scale ground wars, and reorienting U.S. foreign policy towards the Asia-Pacific, among other measures, could collectively lay the foundation for a more sustainable U.S. role in world affairs—not overnight, but over time.

While incrementalism and pragmatism may not arouse great excitement, the Trump administration would be wise to practice those virtues as it surveys an increasingly disorderly and contested strategic landscape. It should not allow developments in Europe and the Middle East to prevent the U.S., once again, from according due focus to the Asia-Pacific, which is the nerve center of world order. It should also appreciate that in an increasingly nonpolar world—whereby a vast array of actors below, at, and above the level of the state exercise influence—the task of U.S. diplomacy will increasingly be to convene, not to impose; the P5+1 nuclear deal with Iran and the joint U.S.-China commitment to COP21 are cases in point. That task, in turn, will require the U.S. to pursue new openings, not to abide calcified thinking—consider the rapprochement with Cuba and the opening to Myanmar.

The suggestion here is not that President Trump should mirror President Obama’s foreign policy; every leader continues some aspects of his or her predecessor’s policy and departs from others. The early indications suggest, however, that Trump is pursuing not a measured recalibration of postwar U.S. foreign policy so much as a fundamental transformation thereof—one that combines an aggressive unilateralism with a 1930s-era disengagement from world affairs. That reorientation flows from a conviction that the U.S. has been a victim of globalization, but does not, as of yet, appear connected to a longer-term conception of America’s role abroad. To the extent that Trump’s foreign policy unnerves longstanding allies and renders the postwar order vulnerable to further erosion, it seems more likely to hasten America’s relative decline than to restore the “greatness” he alleges it has lost.

Ali Wyne is a second-year Master in Public Policy student at the Harvard Kennedy School.