Home > Articles > Why I Joined the Women’s March on Washington 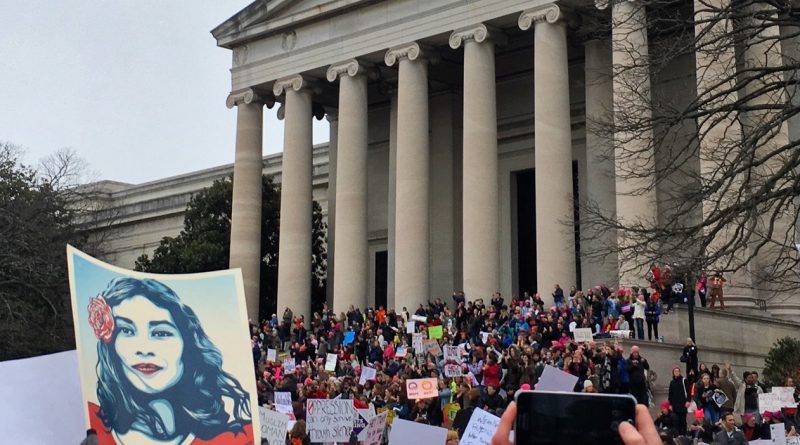 “Flight attendants, please prepare for landing.” As the ground got closer and closer, I start hoping that perhaps the flight would last just a little longer. I am flying into Washington, DC on President Trump’s Inauguration Day for the Women’s March on Washington. The Inauguration began when I was in the air, and I am enjoying the short respite from news of the event. Landing means acknowledging that we have entered a new era, one in which—as a news alert on my phone kindly informs me—“Donald Trump is now the 45th President of the United States.”

I walk through the airport, a television screens the beginning of the Inauguration, and the unthinkable reality starts to sink in. But then I see a woman carrying a bedazzled “women’s rights are human rights” sign, a group of men and women in pink “pussyhats,” and a mother and young daughter dressed in all pink. They, like me, are marching for women everywhere to live in a world that values us, and our dreams.

On Saturday morning, I wake up before my alarm, adrenaline already pumping. I pull on my Planned Parenthood T-shirt, lace up my hiking boots, and triple check that I have all the necessities for a full day of protest. ID, Band-Aids, and granola bars: check.

The streets are lined with pink hats, bobbing beacons of resistance against the ominous, gray sky. As I draw closer to the National Mall, I am swept up in a sea of the hats, poster board signs, and marchers of all genders, races, and ages. I ride the wave to as close to the stage as possible. I still could not see or hear, but the real show seems to be the clever array of signs everywhere I look, the songs of resistance floating by, and a strong sense of community and love that is palpable. A man walks by with a giant inflatable globe on his head and a sign that says, “Respect your mother,” and a large group of people march by with a banner stating “We the People” with thousands of signatures on it. I am hopeful and proud in a way I haven’t been since the election, and tears well up in my eyes every few minutes.

I ask a woman from Los Angeles why she is marching. She holds my gaze for a moment and says, “It’s hard to articulate when it’s everything!” That morning, I hear and witness reasons from “black lives matter” to “love is love” to “refugees welcome.” Two young girls from Maryland tell me they are marching for clean energy and hand me a list of three things I can do for sustainability. Women chant, “my body, my choice” rings out, and men call back, “their body, their choice.”

“I can’t believe I still have to protest this! I’ve been protesting before you were a glimmer in your parents’ eyes,” one older woman tells me. It pains me to realize that I may be fighting for the rest of my life. Having come of age in the era of Obama, progress feels not just possible, but inevitable. But now the guarantee of progress is gone, although it likely was never here to begin with. I think of all the young girls I see and realize that if I want their lives and their children’s lives to be better, I’ll have to keep showing up. It is no longer optional. I—we—must fight for the future we want to see.

One woman from Florida tells me that when she told conservative coworkers she was going to the March, she was surprised at how many of the whispered, “thank you.” So many men and women are marching for others there and not there: two women have giant cardboard cutouts of paintings of their mothers. Other women have their daughters on their signs, and others prominent women, like Malala Yousafzai, Gloria Steinem, and Dorothy Pitman Hughes. One sign says, “the first female president is watching.” I march for her, and I know others are, too.

As we march towards the White House, a giant chant breaks out: “We are not going away, welcome to your first day.” Trump may have won the presidency, but the March makes me realize that this is the beginning, not the ending, of a long movement toward justice.

Today in the U.S. we are perhaps closer to achieving gender equality, the full protection of women’s rights as human rights, and the end of violence against women than ever before. But we still are incredibly far away. The millions of women who marched with me around the world on Saturday made loud and clear that we are not going to stop taking up space on the streets until these goals are achieved. And even then, there will be more work to do.

I marched to say we are here. We are watching. And we are not going anywhere.