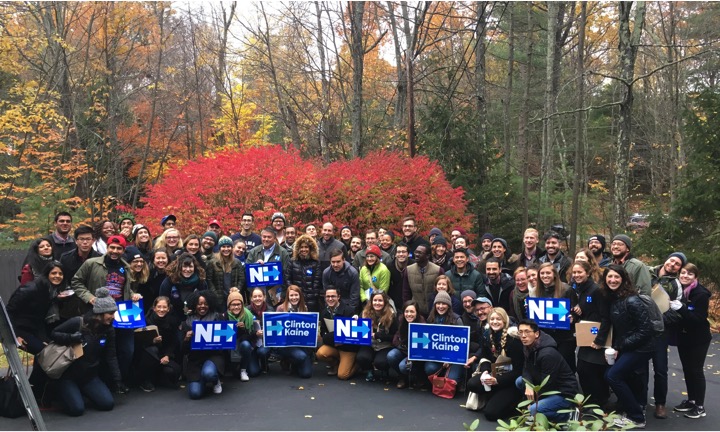 Brynna Quillin has stamina. You can tell by the way the second-year Master in Public Policy student braved New Hampshire cold and rain, organizing hundreds of Harvard students to knock on more than 8,000 doors for Hillary Clinton. By the way she supported her peers after the unexpected election results, with cheerful Facebook comments and in-person gestures. By the way she speaks, not missing a single beat or nuance to the challenges facing our country. On November 11, I sat down with Brynna, Canvassing Director of the Harvard Kennedy School Democrats, and she spoke candidly about her desire to keep fighting for what she believes in.

Andy Vo: Walk me through: how are you feeling?

Brynna Quillin: It’s been a tough couple of days.

Yesterday was about grieving, and I think today is [about] starting to come to terms with things and the reality of it all. It’s going to be tough, but I’m already inspired by all the activism I’ve been seeing on Facebook and with the people I know.

AV: What do you think was the toughest moment?

BQ: For me personally, it was thinking about all these young girls that I met on Election Day in the Manchester Field Office. I met this one girl who was in a pantsuit. She was probably eleven years old. You could tell she was Class President in Training and she was just so confident. She came up to me and was looking for some Hillary stickers for her pantsuit, and I ended up giving her my favorite Hillary button because I couldn’t find any stickers. And I was like, “I want this girl to feel this excited forever, and maybe she’ll hold onto this.”

I thought about her and all these other young girls I met… it’s just devastating to think about how we won’t have a female president and we may not have one for a while.

AV: How did you get involved into politics?

BQ: What really got me started in politics was in 2008 when Obama first started running. And I remember watching the “Yes We Can” video—the will.i.am “Yes We Can” [music] video. Music and politics are the two most important things to me, and the feeling of being in something bigger than yourself just really inspired me.

In 2008, I actually went out to my field office in suburban California (it was going to be blue anyway). I tried to knock a few doors and talk to some people and it was so scary and beyond anything I’d ever done before.

AV: How did you get involved specifically in the political field for women?

BQ: After I graduated from school, my family moved from California to Texas in 2012 and I didn’t know what I was doing, graduated without a job. My mom said she was watching the Colbert Report and [heard about] an organization called Battleground Texas, working to turn Texas blue and elect Democrats. I was moving to Texas to be with my family and I was like, “Oh, maybe I’ll find my people there.”

After that, I [worked] on Wendy Davis’ campaign for governor in 2014. When I was there that summer, I got to watch her famous filibuster for women’s reproductive rights. That was on my twenty-second birthday, so it was pretty cool. It was a very life-changing moment where you saw the power of the people and people using their voice to make a change. Getting [people] involved with their communities: that’s one of the most powerful things about our democracy.

AV: In her concession speech, Hillary Clinton said there will always be setbacks when you fight for what’s right. Was there a setback in your life that really hit you hard, and how did you come back from that?

When she lost, I took it very, very personally…For something we believed so much in—we thought we were going to make a change and come really close—we lost by twenty points. It was called the second the polls closed. It was one of those [elections] where you felt like you were getting punched in the stomach. It was good preparation for this experience, as sad as that is.

But in campaigns, someone loses. Multiple people lose. And so…knowing that you’re trying to do what you think is best for people, and trying to help people do the most good are things I think about a lot and really want to keep fighting for in my life.

AV: What lessons did you learn from your time in New Hampshire?

BQ: New Hampshire is an interesting place: such a small state that gets pounded with people in the primaries and general. We talked to people three times in a weekend and they were like, “Stop coming here!” and “We know what’s going on!” But you have to get those people out to vote.

It’s hard because you look at Trump’s campaign and he didn’t have a field program. It’s easy to think you don’t need that. But I don’t think that’s how you build a long-term, sustainable movement. It’s about the personal conversations and relationships you build, and really seeing people and where they’re coming from. I just think that going out, knocking doors, is still the most effective way to turn states in your favor.

AV: In terms of making that difference, a lot of students at HKS are saying, “We need to talk to folks in rural communities.” How do we make a difference in their lives, and how do we make the case for Democratic policies?

BQ: What’s hard right now is that we’re making a lot of assumptions about what people think and why they voted this way.

I think people voted on emotion, frustration with Washington, anger, and being upset that wages are stagnant. Maybe things are changing a lot faster than we’re used to, so I think trying to help people get through that process of globalization and technology and the changing place of women in society… [Democrats need to] let people know that we’re not just a party of liberal elites/coastal elites, that we really do care about this whole country, and that we’re listening to their needs.

AV: Looking forward, what’s going to motivate you in the years to come?

BQ: Really being focused on the communities that will be at risk and making sure we can do everything we can to protect the rights we have is going to be really motivating.

I feel like my purpose is clearer than ever, and I feel so strong and passionate about the things I’ve cared about before—social justice and women’s rights and protecting the climate. I think it’s going to be really important that we’re ready to fight those fights however best we can. Yeah, I’m looking forward to these next couple months getting ready for the challenges ahead.

AV: Is political office somewhere along your trajectory?

BQ: If I had the opportunity and that’s where I thought I could make the biggest difference, I would definitely think about it. Last year, the reason why I decided to do the From Harvard Square to the Oval Office program was because I had never seen myself running…but if I believe more women should be in office, I should really walk the walk and not just talk the talk.

And I think feeling pretty despondent about not having a female president, it seems more important than ever that people step up and run for local office…When I interned on the Hill many moons ago, I worked for my local Congresswoman [Jackie Speier] and she said when she was growing up during JFK’s time, being in public service was the highest honor…serving this country. That’s something that’s really stuck with me and so…who knows?

This interview is the first in a multi-part series with students at the Harvard Kennedy School who embody the motto of John F. Kennedy, “Ask what you can do.” It has been edited for brevity and clarity.

Andy Vo is a second-year Master in Public Policy student at the Harvard Kennedy School. He is the co-chair of the LGBTQ Caucus and a founding member of the Live Poets Society, a spoken word group at HKS.