Home > Articles > How Could Anyone Not Support the HUDS Strike? 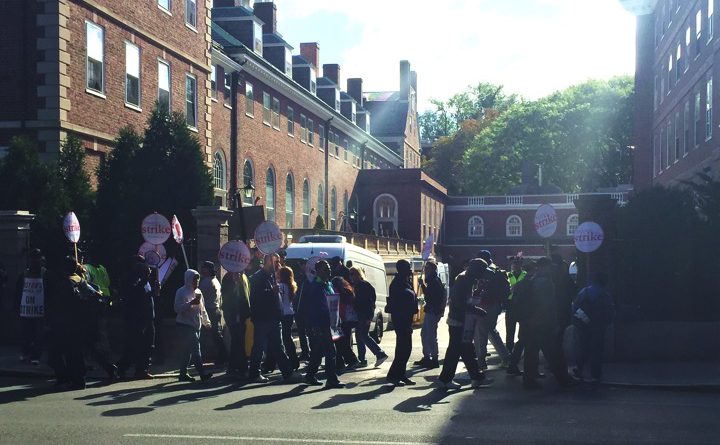 Last week, the Harvard Kennedy School Student Government (KSSG) voted on a Resolution that would “support the Harvard University Dining Services (HUDS) workers’ decision to strike for a fair contract.” The statement comes after some 700 food service employees have been on strike since October 5, 2016 following the expiration of their contract while the union representing their interests continued to negotiate with the administration over terms of a new contract. Many KSSG representatives like myself abstained from the vote over concerns the proposed text did little to confront legitimate reservations many students shared.

Student representatives at the Harvard Kennedy School managed to pass the Resolution with only 43% of KSSG members casting votes in support of it. Imagine the U.S. Senate required a quorum of 51 legislators to call a vote, and then only required a simple majority of those present to pass the bill. The KSSG vote in support of the strike was also problematic because it left little room for discussion or careful deliberation of the facts surrounding the labor dispute. After all, who doesn’t want to appear sympathetic to HUDS workers or tackle the special interests of Harvard’s pampered and greedy elites? However, it’s possible to empathize with the plight of HUDS workers without sacrificing intellectual rigor in the process.

Early Tuesday morning, representatives from the union and the administration reached a tentative agreement over terms of a new contract. Union officials were swift to declare victory, but the adversarial tone surrounding the standoff masqueraded the fact that the two positions were hardly incompatible with each other.

The argument in support of the HUDS strike went something like this: Harvard is unfairly shifting the cost of healthcare to HUDS workers, who are already paid low wages. Harvard must yield to the demands of UNITE HERE Local 26, the Boston-based union representing HUDS workers, in order to set an example for employers everywhere who are swindling American workers.

The Harvard Student Labor Action Movement claims over 3,000 students have signed a petition supporting the strike. Student groups from Harvard Medical School and Harvard Law School, among others, issued statements in support of the food service workers.

This past week hundreds of undergraduate students walked out of class to show support for the strike. Alumni groups have joined in as well. Furthermore, every Harvard College student body president and vice-president since 2011 called on the University to “stop prioritizing money over people.” So as members of the KSSG considered a draft Resolution in support of the strike, the social pressure to conform was enormous.

When I asked fellow KSSG representatives whether our role was to do a public service for HKS students by weighing the merits of the dispute or merely expressing a sentiment, one of the Resolution’s co-sponsors suggested to me that “supporting the strike is more of an emotional and symbolic” gesture. What should we make of students choosing to withhold support for the strike for complicated economic reasons?

The union representing the dining workers claimed that HUDS employees are not paid a fair wage. A look at total compensation paid to dining services employees for similar food service work in the area revealed a different perspective.

The University contends that wages and benefits are among the highest for comparable occupations in the area. The average HUDS employee earns $21.89 per hour over 38 weeks. Total compensation, including health and pension benefits, amounts to $54,657 per year.

A general services employee at Harvard can expect to make 29% more per hour than a similar worker at MIT. Checkers, cooks and general service employees at Harvard make on average 34%, 30%, and 41% more (respectively) than their peers at MIT, Northeastern, Emerson, Boston College, UMASS, Wellesley, Columbia or Princeton.

The gig economy has opened opportunities for many otherwise shut out of the labor market. But when Local 26 complained that workers were unable to receive unemployment compensation over this period, the University proposed an idea that would allow workers to temporarily draw unemployment benefits over academic breaks. The union demurred. So instead, the University offered a $250 stipend “for weeks during which they did no work for the University.”

The union also claimed that the administration’s health care proposal was unaffordable. This would have been the first time since 2008 that Harvard made any changes to its health insurance plan for HUDS workers. Over the same period, average worker contributions to employee-provided health plans in the region have increased 34%, while total premiums have continued to skyrocket.

To understand what could be driving the administration’s proposal, it might be useful to understand where Harvard gets its income for operations and how those funds are spent. For example, revenues to the Harvard Kennedy School come primarily from a few sources:  income from students (27%), disbursements from the endowment (26%), federal and non-federal (i.e. foundations, foreign sponsors) sources (20%), and gifts for current use (19%). Meanwhile, compensation expenses – i.e. wages, salaries, and benefits – command approximately half of the University’s operating expenses. That’s over sixteen times the amount spent on direct outlays for scholarships and student awards.

According to the University’s financial statements, Harvard’s health plan expenses increase well above inflation and approximately 200 basis points faster than growth in overall operating expenses. The increase is driven by the increasing costs of healthcare and the rising cost of claims.

To help keep these costs under control, Harvard implemented changes to the health benefits of its active, non-union employees in 2015. While not without dissent, the new plan followed a wide body of research that demonstrates modest patient cost sharing reduces overall spending without negatively affecting health outcomes or the quality of care. Cognizant of potentially adverse distributive affects, the administration incorporated a new reimbursement program to support employees at the lower end of the pay scale. Without modifications to the University’s health plan, the University projections on health spending were unsustainable.

The union representing HUDS workers continued to oppose any change to the current health plan. When the University offered to provide $25 million for HUDS employees to join the health insurance plan offered by Local 26, the union rejected that proposal too.

Rising health care costs exacerbate wage stagnation. The union might have considered that Harvard could be in a position to raise wages for the dining workers faster once health spending comes under control. That’s because take-home wages for HUDS employees often appear static because increases to their total compensation come primarily in hidden forms of pay such as health benefits.

The administration seemed to signal some flexibility by offering to increase wages by 10%, bringing the average wage to $24.08 per hour, over the life of the five-year contract. Concerns that modifications to the health plan would fall disproportionately to lower income beneficiaries could be ameliorated through a tiered premium structure and the creation of a special reimbursement program that protects these workers.

Thus, the administration’s position did not appear inconsistent with the interests of HUDS employees – that is, to make healthcare cheaper for everyone on the plan (if they are to stay on Harvard’s plan).

Harvard could have eliminated health benefits for HUDS employees altogether so workers would have qualified for subsidized coverage on the Massachusetts exchange created under the Affordable Care Act. Questions of comparable quality and access aside, HUDS workers would have been hesitant to make the jump at a time when state health exchanges continue to fail throughout the country and the state expects substantial premium increases next year. HUDS workers were unlikely to find a better plan than the one offered by the University.

Finally, increasing costs associated with retaining HUDS workers may incentivize Harvard University to reduce dining staff or total hours worked by increasing break time or curtailing certain student services. Due to hiring practices, this may shift the burden to newer, younger employees looking to make a career at Harvard.

Judging by the feedback I have received from interested students and other KSSG representatives, it seems many other students had reservations with the process, content, and symbolic nature of the KSSG Pro-Strike Resolution. At a school whose mission it is to train enlightened public leaders to generate ideas to solve challenging problems, one student confided after my public objections: “This is the first time somebody’s said something reasonable about this whole issue.” Others have expressed regret that the KSSG would pass this Resolution without thoughtful debate or careful deliberation of the facts at hand.

Now that a tentative union contract has been agreed upon, I look forward to welcoming our dining services workers back on campus. The next time you patronize a Harvard dining facility, smile and thank a HUDS employee for their perseverance, kind service, and that delicious ham and cranberry Panini.

But ascribing malicious motives to administration negotiators for faithfully stewarding University resources or stoking a spirit of aggrievement among workers is not only unhelpful – it’s uninformative.

There are many reasons to support the HUDS workers. But advancing a symbolic gesture without even considering evidence that suggests the goals of the administration and HUDS employees are not entirely at odds should not be one of them.

Andrew McClure is a joint degree candidate at the Harvard Kennedy School (MPA) and the MIT Sloan School of Management (MBA), where he focuses on national security strategy, technology innovation, and cyber security.  A Marine Corps veteran, Andrew previously served as an intelligence officer abroad.  He currently lives in Cambridge, Massachusetts with his wife and two children.