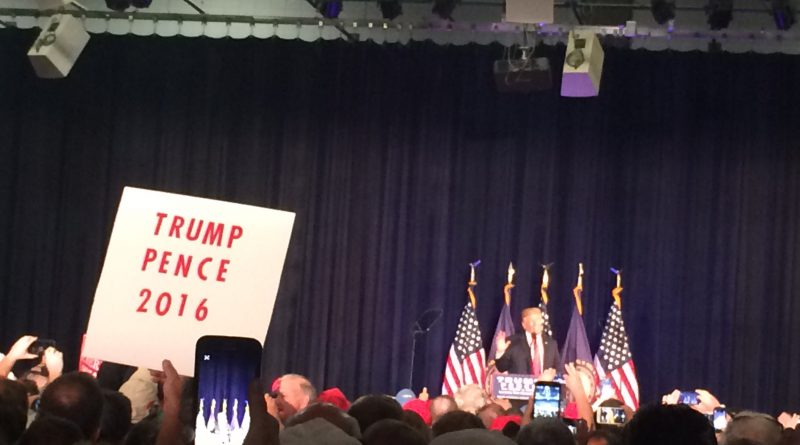 We’ve heard a lot about Trump’s past recently, but less about what the future of a Trump presidency would actually look like. I went to a Trump rally in Laconia, New Hampshire on September 15 to hear his pitch in full to try and figure it out.

Behind the bluster, there is surprisingly radical policy meat in Trump’s stump speech. Early in the rally, Trump framed the election as a choice between globalism and nationalism. He declared, “I am not running to be the President of the World. I am running to be the President of the United States of America.” The US’s engagement with the world can be understood in zero-sum terms, where other nations have claimed an unfair share of the value and the US cannot maintain the status quo because it no longer has the resources.

America’s retreat would have two main components: withdrawal of the “free” security provided by the US military and renegotiation of trade deals. On military withdrawal, Trump weaved in uncomfortable truths regarding the free riding of Gulf allies (if Saudi Arabia is happy to use our military protection, why can’t it take any Syrian refugees?) with misinformation about the cost and benefits of foreign bases. On trade deals, he maintained that workers lose out from free trade agreements and foreign business gains. Slogans around this theme received some of the biggest cheers of the night and also put him in line with a respectable, if unlikely, set of intellectual companions ranging from Senator Bernie Sanders to the UK’s Labour Party Leader Jeremy Corbyn.

Where he quickly parts ways with the socialist leaders is on taxes and regulation, where he toes a more traditional Republican line of massive tax reductions for individuals as well as corporations by proposing to lower the corporate tax rate from 35 percent to 15 percent. He talks also about strategies for repatriating offshore corporate profits with a one-time tax rate of 10 percent. He also promised a “massive reduction in regulations,” specifically singling out the EPA’s clean power plan.

Talking with voters in the hall, nobody felt it inconsistent for an anti-establishment candidate to lower taxes and curb regulation. Many appeared to identify strongly with the business elite who would benefit most, especially when framed as “job creators”. The Kennedy School’s Dani Rodrik has provided a framework in his recent paper ‘When Ideas Trump Interests’ to help understand how economic interests of, say, lower income white male voters, can be trumped by campaigns spreading ideas about identity. In this instance, Trump’s explains economic concerns as the result of immigration along with disorder and chaos caused by other minority groups. In so doing, he both shifts blame for economic issues away from business leaders while simultaneously ‘priming’ white identity to increase lower income white male affiliation with the majority white male business leaders and their interests.

What came next was unexpected. Trump went on a long tangent about childcare, about allowing working mothers to be fairly compensated for their work and to have access to affordable, quality childcare for their kids. Widely regarded as Ivanka’s doing, this key pillar to Trump’s policy platform would have felt perfectly at home in either of Obama’s campaigns, or even Hillary’s. But after an earlier diatribe against government and its growing budget deficit, it felt inconsistent to say the least.

The more supporters I talked to, the more it was clear that most weren’t here for his policies—to them Trump was “strong”, “funny”, and “told it how it is.” But seeing him in person made me realize what these personality traits would mean for the presidency. Trump was very much the only show in town that night in New Hampshire—no other local political candidates were mentioned and neither was the Republican Party. The only other face on stage was Eric Trump who made a brief cameo to remind us what a “great guy” the Donald was.

In many ways, it felt like a time warp. The total lack of recognition of government structures and political institutions reminded me of politics in countries that don’t have those structures and institutions. There were striking parallels with political rallies in East and West Africa and even moments reminiscent of Berlusconi’s Italy, where the organizing principle for government is based on relationships and proximity to the leader, rather than existing legal-bureaucratic institutions. The separation of powers in the US constitution may limit some of the long-term legislative changes that Trump would ever pass, but the change in style alone would already be a radical departure from presidents of recent memory.

Listening to Trump in full gave me a good idea as to what his presidency would look like. It would be more radical than any other presidency in recent memory. We would see the US rapidly turn inwards, taxes and regulation cut, and personality politics rise to its most extreme. These shifts would be seismic with repercussions around the world that most supporters at the rally, let alone Trump, could not possibly predict. While the exact consequences are uncertain, one thing is fairly sure: the changes probably won’t deliver the improvements his supporters crave.

Sebastian Leape is a first year MPP student at the Kennedy School from the UK  with roots in the Boston area. He is excited and horrified in equal measure to be on this side of the Atlantic for the election season.