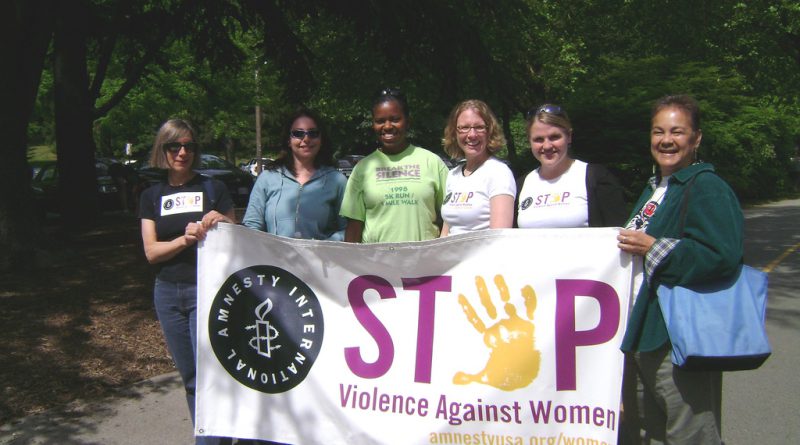 Sex education at my school was a joke. It consisted of an awkward encounter between a bald geography teacher, a banana, and a condom. There was no mention of consent. The class didn’t tackle any of the problems that arise in relationships: resolving differences of opinion, dealing with emotions, or what to do if you’re thinking about hitting your girlfriend or boyfriend.

It was a far cry from the type of candid, open communication about navigating the complexities of sex and relationships that confused teenagers really need. Our failure to educate children about sex, violence, and conflict helps explain why one in every three women has been assaulted by a partner.

Those who have suffered the ordeal of being hit are indelibly scarred by the failure of the education system to prevent violence. International human rights law isn’t ambiguous in the slightest: women’s lives should be free from coercion, discrimination, and violence. Even if you don’t care about lofty international treaties, the damage to women’s health, education, and employment outcomes should convince you of the importance of preventing domestic violence.

Fortunately, people are starting to wake up to the need to prevent violence against women and girls. In April 2014, the prime minister of the United Kingdom hosted the world’s first ever “Girl Summit” aimed at mobilizing domestic and international efforts to end female genital mutilation. Such conferences help generate funds and supporters: Annie Lennox, Charlize Theron and Daniel Craig are all now vocal proponents of ending violence against women and girls.

But we remain unwilling to challenge attitudes in school children, particularly boys. In the UK, this issue is both domestic (determined by our sex education curricula) and international (defined by the targets we choose for development aid). Of the £184 million ($225 million) spent by the Department for International Development (DfID) not a single penny was explicitly earmarked for programs to reduce violent behavior among men. DfID empowers women, trains health workers, and sensitizes communities to the problem of domestic violence. These are laudable interventions, but they are reactive. We must prevent as much as we cure.

Why have efforts to change boys’ attitudes been ignored? Consider three key reasons:

First, the academic research that guides policymakers’ decision-making often presents male violence as a natural phenomenon. Texts in evolutionary psychology such as: Demonic Males, or the criminology works of Daly and Wilson use the camouflage of the nascent science to create alibis for male violence. Consequently, female security-orientated solutions are developed based on the premise that the problem must be tackled by monitoring and punishing culpable males. No attempts are made to reimagine gender relations, and violence is presumed to be an inextricable part of a gendered social order, rather than an unwarranted exercise of force and power.

Second, donors and governments like to see the effects of their funding, but shifting behavior can take generations. Changes in attitudes are hard to measure in a way that pleases technocrats with their charts and targets. Policy therefore tends to focus on interventions that generate decent stats for an annual report, typically measured in convicted perpetrators or women’s services expanded.

Finally, women are often considered peace-brokers. This reinforces a cultural and legal tendency to blame women for violence committed against them by burdening them with the responsibility to resolve or leave abusive situations. Pumping development aid into women’s groups presumes women have the formal power to address gender imbalances and end violence, but often they don’t.

Ultimately, women, however empowered, can never independently choose to avoid violence, since there are at least two actors in any abusive situation. If we keep writing such narrow policy that excludes men from taking responsibility for their own actions, 33 percent of the world’s female population will remain susceptible to violence.

Fortunately, progress is being made. The role of society in constructing and sustaining associations between archetypal masculinity and violence, strength and power, is slowly being unraveled.

Institutions as diverse as Harvard Business School and the European Commission are emphasizing that violence against women and girls is not just a women’s concern. In Kenya a program developed by No Means No Worldwide addresses the issue directly by working with boys to re-conceptualize masculinity. A Stanford University study of the program found that it transforms attitudes towards women and rape. Class participants were also more likely to intervene in the event of an assault. These interventions acknowledge the profound importance of cultural and social phenomena on the use of violence. They present the more optimistic view that male violence is not immutable—it can be transformed, if only we acknowledge that men can change.

Multiple factors, from where we are raised to how our basic needs are met, determine whether or not we feel a need to resort to violence. Among these factors, what we learn at school is critical. Unless we face the need to discuss consent and violence, we condemn ourselves to a living in a world where assault is an inevitability instead of an aberration.

Nyasha Weinberg is an MPP student and Kennedy Scholar at the Harvard Kennedy School of Government. She previously studied Human Sciences at Oxford University and on graduation worked as a Civil Service Faststreamer and in education policy.