Home > Articles > Why Harvard Dining Hall Workers Are On Strike 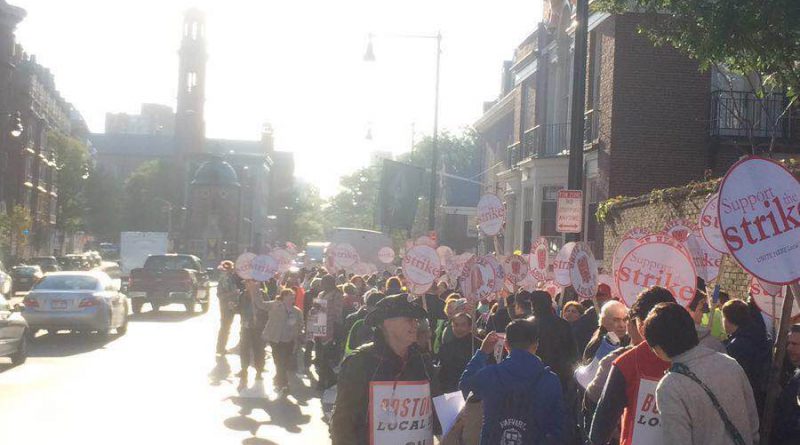 The 600+ employees of the Harvard University Dining Services (HUDS) are now on strike. The outcome of this strike has as much to do with the future of Harvard as it does with HUDS employee wages and benefits. At its heart, this labor dispute is about what kind of employer Harvard is and what kind of community Harvard stake holders want to be a part of.

The University is asking workers to make significant concessions. Under the University’s current proposal, the cost of health care (specifically certain co-pays) to HUDS employees is projected to increase—significantly. Shifting the unpredictable cost of health care onto the people who can afford it least is a bad idea. With 48 percent of HUDS workers making less than $35,000 a year, increasing the cost of certain medical visits will likely discourage preventative care. Dianela Barros, a HUDS worker at the Harvard Kennedy School explained what increased medical costs would mean for her. She developed gestational diabetes during her pregnancy, and has never recovered. Increasing the cost of her medical insurance will force her to make some tough decisions: Should she continue seeing her doctor-recommended nutritionist? Should she continue sending her young daughter to after school tutoring?

There is also a disagreement about whether Harvard has a responsibility to ensure that the relatively high hourly HUDS wage translates into livable yearly pay. Local 26, Unite HERE, the union representing HUDS workers, has proposed that the University institute a yearly pay floor of $35,000. In Cambridge the annual living wage for a single parent with one child is $55,000. The University is baulking at the suggestion of a yearly wage floor. They point to the fact that the HUDS operation is largely seasonal. They are correct. Cafeterias close during the summer break. In the past, the University ensured some continuity of employment to HUDS employees by offering summertime work At present, Harvard uses temporary staff to do the work they once offered to HUDS employees. But even if Harvard resumed this past practice, there would still be HUDS employees without summertime work that would benefit from this proposed wage floor.

A minimum yearly wage floor is a way for the University to share, as it once did, in the burden that a seasonal food service operation imposes on its employees. This is needed because the HUDS workers can’t collect unemployment in the summer and many struggle to find comparable short-term work. HUDS workers are intimately involved with and part of the Harvard community. That’s why their employment conditions and job security have a large impact on the Harvard community. They feed most of the campus and many of them have been here for decades and would like to stay their whole career. That is a good thing—it builds a loyal and invested workforce, which supports a vibrant campus community.

Employers across the country have shortchanged workers. The question is, will Harvard University join them? That’s why the use of subcontracting, temporary, and on-call work has exploded across the economy. That’s why even the most credentialed workers are increasingly doing “contract” work. Despite what some people say, this move to short term, temporary, on call, and contract-based work is not primarily a response to employee demand for flexibility or even to a changing consumer demand. It is a carefully considered strategy, which limits the employer’s liability by transferring the costs and risks of employment onto individuals. Harvard has a responsibility here, to be a good employer, even a better employer than its neighbors.

Professors, administrators, janitors, many students, and even some alumni are also employees of the school. If Harvard preservers in their contract demands against the HUDS workers, all Harvard employees and the community will suffer because Harvard will have taken one more step towards low road employment.

Strikers gathered early this morning and spread out around campus to picket. Many of the Harvard Kennedy School Forum Café workers were picketing on JFK Street until mid day. They are determined. They will be back tomorrow and every day until Harvard University takes a more reasonable position.