Home > Articles > Even Putin Is Second-Guessing a Trump Presidency 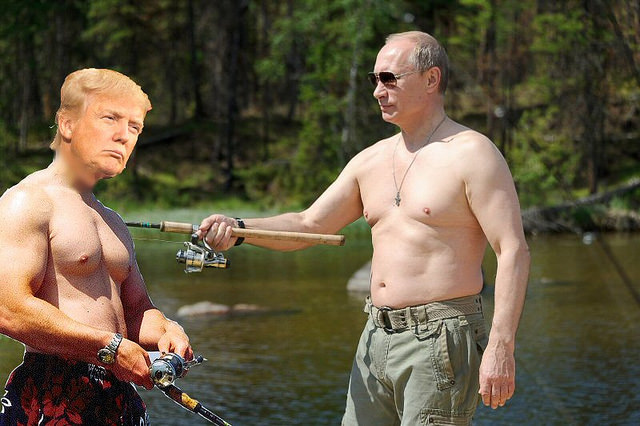 NEW YORK – Vladimir Putin stands alone on the sidewalk outside of the headquarters of the United Nations. He looks over his shoulder and, seeing no one he recognizes, climbs into a black sedan. Putin relishes the anonymity of the big city, and makes every attempt to escape obnoxious reporters and his overbearing security detail.

The driver turns around from the front seat. “You got it buddy. Hey, have you ever used Uber Pool before? We need to pick up another passenger before we get you to your destination. We’ll have to go a little out of the way, but it’s great way to meet new people! Looks like we’re picking up a Boris next.”

After a few minutes of icy silence, the car stops outside 2 Bros. Pizza, a by-the-slice pizzeria on 6th Avenue. A man in a wrinkled suit crowned with a mop of blond hair opens the passenger door and slides in next to Putin. Putin’s instinct is to ignore the stranger, but his eyes are immediately drawn to the large tomato sauce stain on the man’s shirt.

“Boris? Boris Johnson!?” the usually unflappable ex-KGB man blurts out at the sight of the United Kingdom’s Foreign Secretary.

“Vlady? Mate! What are the chances?! I was just grabbing a bite to eat. I missed dinner because I was on the phone with Theresa for hours,” exclaims Boris.

Putin quickly composes himself, and coolly asks, “Which matters did you discuss with the new Prime Minister?”

“Boring Brexit stuff. I’m getting bored just thinking about it. I’m headed to a party right now in the Lower East Side with some old mates from Oxford. We got two kegs of beer. It’s more like a Kegxit, am I right?” Boris replies as he elbows Putin in the ribs. Putin considers breaking all of the bones in Boris’ arm.

“Hey, did you watch the American presidential debate tonight? Trump is barking mad! That bird took the piss out of him alright,” snorts Boris.

Maybe it was from the joy of scuttling the most recent Syrian ceasefire, or perhaps he realized that he had not candidly offered his opinion to anyone in 16 years, but at that moment Putin decided to provide his true feelings on the American election.

“Comrade, I think I may have made a mistake. At first, my praise for Donald Trump, was to…what do the Americans call it…ah yes, troll. I wanted to troll the Americans by elevating this bombastic character. To show to the world that their democracy was a farce, that any demagogue could win power in their system. I took pleasure in seeing their myopic journalists and political elite squirm as this idiot, this ‘carnival barker’ dominated their treasured political system.”

“Haha, good one Vlady! Say, how late is the Disney Store open?” Boris wonders aloud as the car slows for traffic in Times Square.

Putin continues, “And when Trump won the nomination, I could not believe my luck: the presidential candidate of a major American party making public statements critical of NATO and supportive of Russia! So, I decided to give Trump another boost with a release of some Democratic National Committee emails we had stolen a few months earlier. The fallout from the scandal was enough to add another cut to Hillary Clinton, one of a thousand cuts to drain her campaign of life.”

Putin knows he has said too much already, but he cannot stop. Boris checks his cellphone. Still no RSVP from John Kerry for the party tonight.

“Just imagine, an American president who publicly questions the value of their alliances all over the world! We had to do something to realize that possibility. Did we not?” Putin nearly shouts. Putin clenches his fists, his eyes gleaming with joy, the type of joy he only feels when riding horses shirtless through the Siberian forest.

Then, slowly, Putin looks down at the floor of the car, his fists unclench, the glee gradually draining from his face.

“But after watching the debate tonight, I realized we had gone too far, that we did not thoroughly consider the impact of a Trump presidency on American foreign policy. I realized that for all of America’s mistakes in the world, and there are many, Russia can benefit from American engagement. The United States has the foresight to build alliances in the Pacific to counter the Chinese, who we have never trusted on our southeastern border. The United States has the military power and political patience to battle the Islamic extremists for 15 years, the same type of extremists who hit us so hard in Beslan and Moscow. The United States guarantees the security of Germany, Saudi Arabia, South Korea, and Japan, nations that could destabilize their regions were they to feel threatened.

“But Trump would dismantle all of this. He has ridiculed the American alliances, and the efforts to stop nuclear proliferation. And his call to defeat ISIS is all just reality-show bluster. Trump would undermine what some of the wiser Americans took decades to build, a system in which Russia is content to pursue its objectives.”

Boris quietly snores in his seat. Putin ignores him.

“I cannot say Hillary Clinton is much better. She has not served the Americans well. She supported the armed intervention in Libya without a clear plan to rebuild the country. She voted for the disastrous American expedition in Iraq. Her attempts at ‘resetting’ relations with us were ill-conceived and fruitless. And her overall record as Secretary of State was unremarkable. She made no major mistake, but solved none of America’s intractable foreign policy problems, or the world’s.”

Putin looks up outside the passenger window and sighs.

“But regardless of her policy prescriptions, she understands the issues, thinks rationally about the options, and will at least ensure America maintains its predictable, traditional role in the world. Even though America sometimes pushes back on Russia’s rightful prerogative in Europe and the Middle East, we can do business with her. Remember, Boris, I was a Cold Warrior for many years. I will maximize Russian national interests at every opportunity, but I cannot do so peacefully without a rational opponent. A President Trump means an America still powerful, but not guided by reason. And without reason we get…” Putin shakes his head. “…American boys and Russian boys killing each other in the Fulda Gap. I am a warrior, Boris, but not a reckless one. I simply cannot understand how the Americans could choose Trump.”

The car hits a pothole and Boris is jolted awake. Boris stammers, “Excuse me, driver, can you stop at that McDonald’s? I have to use the loo!”

The driver pulls over and Boris rushes into the McDonald’s.

Putin hears Boris yelling inside, “What? I can’t use the loo unless I’m a paying customer? Oh, I’m sorry, I thought this was America!”

Putin, still deep in thought, looks out the window and says to no one, “So did I, Boris. So did I.”

Andrew Kalaris is a second year Master in Public Policy student at the Harvard Kennedy School. He is a former Marine artilleryman.