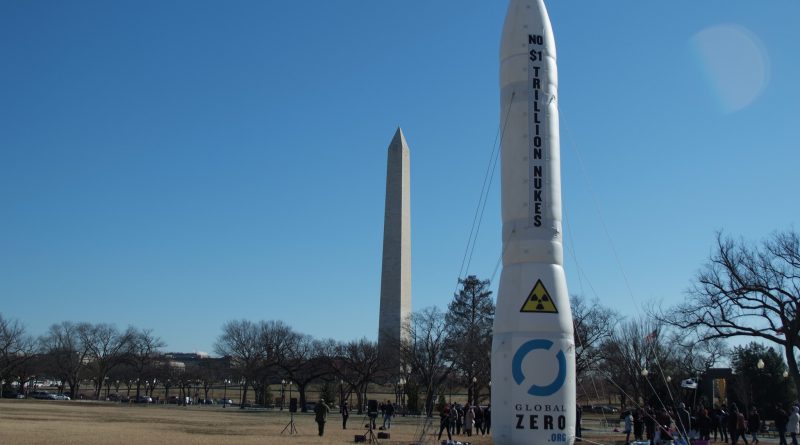 Nuclear weapons and mutually assured destruction (MAD) may not sound like the means towards a peaceful international environment. Nevertheless, the existence of nuclear weapons since the beginning of the Cold War has turned out to be critical for U.S. national security policies, particularly in the application of deterrence strategy. A total elimination of nuclear weapons is not imaginable because of the inherent challenge in destroying existing weapons, materials, and knowledge.

The U.S. is the only country in human history to have used a nuclear weapon and knows its disastrous effects. Yet, the country keeps one of the largest nuclear inventories next to Russia. President Obama stated in 2009 that the U.S. has the responsibility to seek a nuclear free world. UN Secretary General Ban Ki Moon added that Global Zero must be achieved. Is a world without nuclear weapons a tangible goal? If Global Zero were achieved, would it create stability and peace? Although Obama favors a nuclear free world, he has not been able to make significant steps towards it. He admitted that a total elimination is not likely to happen in his lifetime. In fact, during his presidency the U.S. has seemed to reinforce its strategy of nuclear deterrence. The U.S. Nuclear Employment Strategy (NES) expanded its deterrence strategy, recognizing a growing risk of nuclear attacks. Especially Iran, North Korea, Pakistan, India, China, and Russia are monitored and carefully analyzed in their nuclear endeavors. Though Russia and China do not seem to make efforts to significantly increase their arsenals, the smaller powers in fact do.

If a Global Zero were to be achieved, all actors would have to eliminate their nuclear inventories and intentions. However, one has to question countries’ motivation to do so. Russia and the U.S. have lived for decades in nuclear deterrence. The U.S. Nuclear Employment Strategy supports a strategic stability with Russia. It does not seem desirable for either country’s national security to risk this stability by eliminating nuclear inventories indefinitely.

Furthermore, President Obama has stressed that the U.S. must prevent terrorists from acquiring nuclear weapons because of their extreme threat to global security. Even if nuclear states agree to destroy their inventories, it is not feasible to destroy the knowledge, technology, and materials that lie behind them. The weapons themselves are only the ends. Unless the means – knowledge and theories — also disappear, the world will be eventually rearmed. After all, it was in a world without nukes that the weapons were invented. Why would a Global Zero today remain free of nuclear weapons if scientists saw a need for them during the Cold War?

After over two decades since the end of the Cold War, a third player has entered into the calculus of MAD: China. The U.S. Department of Defense concluded in 2015 that China has sufficient strengths to inflict unacceptable damage on an enemy. Knowing this, it is in the interest of the U.S. to prevent a nuclear dispute. The Chinese government has assured that it will not use nuclear weapons in a first strike. Assuming China maintains this capacity, no other actor has an incentive to make a nuclear strike against them knowing the drawbacks. This scenario creates a cold stability. China is an example why Global Zero is not in the interest of the U.S. MAD creates greater stability for both countries than an elimination of both nuclear inventories.

If the U.S. agrees to eliminate its whole nuclear arsenal, it would put the country in a disadvantage that could end in disaster if other actors obtain nuclear weapons. The international arena of nuclear weapons is an insecure place. Terrorism is prevalent and nuclear black markets exist. Any agreement, treaty, or act that would aim for Global Zero would be binding to state actors only and hypothesize that everyone follows the rules. Hence, we have the challenge that terrorist organizations would not be included and remain independent in their decision and attempts to acquire nuclear material.

There has been an increase in the risk of terrorist capture of the weapons during transportation over the past two decades. The transit of the material implies automatically a security vulnerability. One example of this risk is the 2007 Air Force nuclear incident when nuclear warheads went missing for 36 hours. The potential to have a disastrous outcome that day was extremely high. Any transportation of nuclear material imposes a security threat. Second, trust and faith would determine U.S. security. Like any other international agreement, a “Global Zero Act” would require the U.S. to trust other actors. Irrational actors, information asymmetries, and uncertain intentions make this trust unworkable.

If the U.S. agrees to a Global Zero, it eventually would lead to a new nuclear race that would result from the non-nuclear world. Non-state actors and irrational actors would race to get their hand on the weapons first to gain a military “deadly advantage.” The U.S. and other actors would then desperately hustle to prevent this race from a disastrous finish. Thomas C. Schelling argues that the nuclear stability should not be traded for a race to reacquire the nuke. This race scenario can only be averted if the U.S. and other great powers keep their nuclear advantage in deterrence strategy.

One might argue in favor of different tools of deterrence. Certainly, great powers have other conventional means that can affect deterrence. However, this would ignore the unique character of nuclear weapons. Simply put, nuclear weapons cannot be deterred except with nuclear weapons. In a worst-case scenario, an irrational actor would obtain nuclear weapons and threaten U.S. national security. What weapons would the U.S. have to counter this threat? The U.S. needs to maintain its nuclear arsenal to deter the threat.

The common assumption that a peaceful word is created through the elimination of weapons ignores irrational actors. Different ideologies and beliefs must be taken into account in understanding the reasons behind existing nuclear inventories and intentions to build such. In brief, the bona fide idea of Global Zero is idealistic, but does not add to a concept of international stability because actors act upon own sets of rationality, ideas, and intentions. One can have a heated discussion whether North Korea’s Juche (ideology of self-reliance that justifies the country’s isolationism and oppression) and ISIS’ Salafi jihadism (establishing a caliphate and returning to the “true Islam”) are rational ideologies. Whether western practitioners agree with the ideologies does not matter. They need to put themselves into the position and mindset of other actors to understand beliefs and intentions.

The Cold War received its name because it did not fulfill the traditional and common idea of a war. Following this idea of rethinking classic definitions, nuclear weapons create the foundation of a cold stability. Their continued existence is essential for the U.S. deterrence strategy. Though, the scenario might not feel secure for citizen, it in fact creates the greatest possible stability one can hope for in the 21st century.