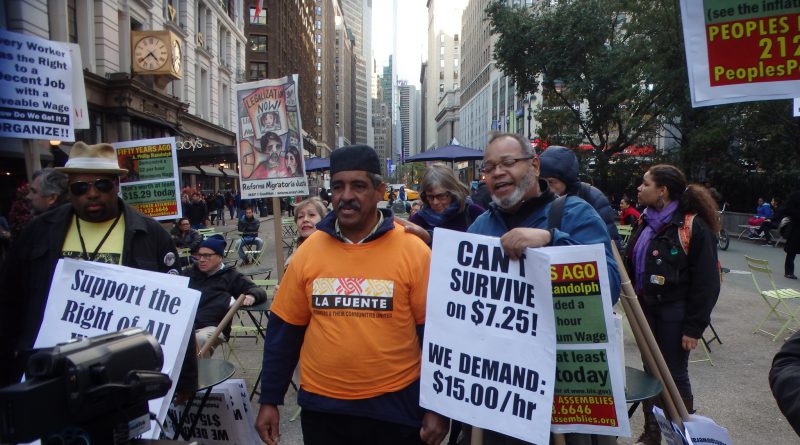 Democrats added a $15 federal minimum wage to their platform before the Democratic National Convention at a time when the minimum wage debate is a hot topic and the “Fight for 15” Movement has already been successful in California and New York.  Advocates of an increase in the minimum wage argue that it would help low-wage workers, facilitate economic stimulus, and decrease employee turnover. Opponents argue that this increase in wages would slow domestic job growth and increase labor costs for companies.

This discussion over the minimum wage is shortsighted and fails to meaningfully affect the long-term well-being of employees and employers. As the economy moves away from human labor and prepares for a new wave of automation, this unprecedented creative destruction introduces economic concerns that are far more relevant to the longer term.

At first glance, the effects of increasing the minimum wage might seem straightforward: the employees who get paid more benefit, while the companies that have to pay higher wages lose. This may hold true in the short run, but the picture is less straightforward when we introduce technology as an efficient and cost-effective substitute for human labor in the medium and long run.

As the cost of labor rises and the cost of technological automation declines, companies are changing the way they operate. Humans no longer have a monopoly over labor: computers and machines now provide fast, efficient, and increasingly cheap services that minimum wage workers have traditionally carried out. Technology’s disruptive effect on a number of industries can be described as what American economist Joseph Schumpeter called creative destruction.

Wendy’s, for example, recently announced its plan to place several thousand automated kiosks in its stores by the end of the year. Its president Todd Penegor explained that automation would help alleviate the 5 percent increase in labor costs.  Other companies have been testing a similar automation strategy as well, indicating that a large number of minimum-wage employees will inevitably be displaced. While minimum wage is one of the key drivers of high labor costs, there are also other factors, such as competition between firms for access to a limited pool of high quality labor. Erik Brynjolfsson, a professor at the MIT Sloan School of Management, recognizes the need to address this cost, noting:

“Productivity is at record levels, innovation has never been faster, and yet at the same time, we have a falling median income and we have fewer jobs. People are falling behind because technology is advancing so fast and our skills and organizations aren’t keeping up.”

The assumption that most minimum wage jobs can be automated is reasonable—for example, checkout people at retail stores can easily be replaced with monitored self-checkout machines; Uber drivers are unnecessary once we have self-driving cars in the mass market.  With a minimum wage increase, automation would likely replace minimum workers faster than at current rates. In the long run, minimum wage workers are not “getting more” when their wages increase: they are simply quickening the rate at which they are being displaced. A higher minimum wage may help an employee for a few years, but this wage increase will be irrelevant if they are replaced by machines and lack the skills that an automated economy demands.  Similarly, in the long run, companies are not “losing” when they have pay their employees a higher wage rate: they will simply have greater impetus to more quickly switch to the cost-effective and efficient automated substitute. This is why intense short-run preferences for and against minimum wage increases do not actually affect the long-run well being of either group.

Rather than continuing to pursue a myopic discussion about minimum wage, businesses, policymakers and minimum-wage workers should turn their attention to preparing for the aftermath of the creative destruction process. Each group should put aside concerns over short-term losses or payoffs and instead make sure that low wage (soon to be replaced) employees are developing skills that will be in demand in the post-automation era. This would benefit both employers and minimum wage workers—for example, the US has a shortage of machinists, occupational therapists, and construction workers, but with adequate training, low-wage workers may be able to take on these jobs.

Training programs appear scarce in this current wave of automation, but in the past the private and public sectors have executed successful efforts during previous waves of automation. For example, General Electric devoted almost $40 million to retrain its employees in the mid-1900s when a wave of automation had an effect on employees of the auto industry. In response to skill obsolescence in the face of technological innovation in the automobile industry, General Motors employees received services such as education planning and lessons related to skills enhancement.  Public sector agencies, such as the Department of Labor, also initiated a number of programs that were designed to better utilize the latent labor force; the federal government offered vocational education programs, conducted studies effective training, and offered technical assistance to community organizations.

If we want companies to remain efficient while helping employees maximize their lifetime earnings, we need to stop focusing on the minimum wage rate and instead invest in programs for low-wage workers that allow them to transition to new jobs that will be in demand. Adaptability is now a key quality celebrated in high-skilled workers and simply advocating for a higher minimum wage without training low-skilled workers to adjust to an economy in flux will not dismantle the unjust wage hierarchy.

Kavi Patel is an undergraduate at Harvard studying Economics and Government. She interned as an Economics Research Intern at The White House this past spring and is passionate about the intersection between economic theory, government policy, and the private sector.