Home > Articles > Shattering the Glass Ceiling: My Time at the Democratic National Convention 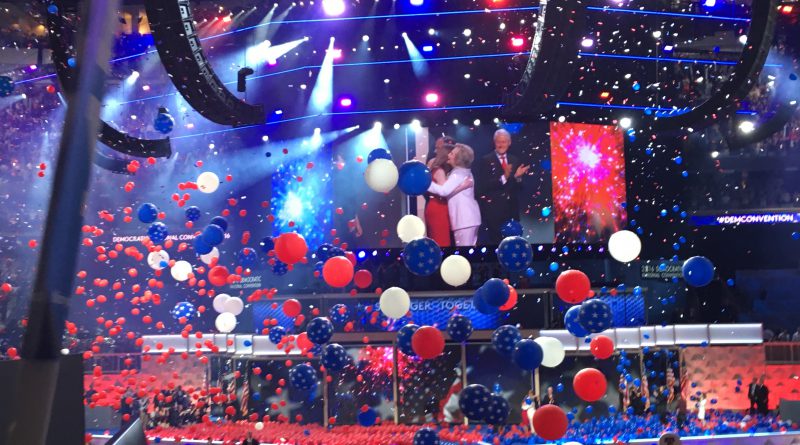 Crammed into a narrow hallway leading to the convention hall, I stood on my tiptoes to locate the podium on stage above the ponytails and tall “Hillary” signs. For months I had been eagerly awaiting Hillary Clinton’s speech at the Democratic National Convention. Clutching the “USA” and “Michelle” signs I had scavenged from previous days, I felt overwhelmed. The moment was finally about to arrive.

Since the day Clinton announced her run for president, I have been fully with her. Something about her candidacy resonates deeply with me in a way that I never anticipated. When I received an email from an old colleague asking for volunteers for the DNC, I signed up right away. It did not matter what my volunteer role would be—I knew I had to be there when she made history and accepted the Democratic nomination for president.

A month prior, I received an email saying I would be a “super volunteer” for the Hall Access Control Team, which sounded vague but intriguing. I submitted my background information for vetting and packed my bag full of my favorite blue blouses. Sprinting through Washington, DC’s Union Station to catch my bus to Philadelphia, I had very little idea what I was in for.

I signed up to work Wednesday and Thursday, the third and fourth days, of the DNC. On Wednesday morning, I trekked through a parking lot in the humid Philadelphia weather to find the volunteer tent. When I arrived, a staffer handed me a headset and an assignment: manage the volunteers checking credentials at the media entrances. It was a simple but relentless task, with reporters, producers, media personalities, handlers, assistants, cartloads of food, and more constantly streaming in and out throughout the day.

By the last day of the DNC, I was already exhausted from the previous day’s activities, which culminated with President Obama’s ringing endorsement of Clinton. As I explained our team’s role to my volunteers for the day, I could see how disappointed they were that they were not working inside the arena where they could see Clinton’s speech. Knowing we were all here for the same reason, I promised them that I would let them go before Chelsea and Hillary Clinton’s speeches. As I told this to Susan, one of my volunteers, her eyes met mine and a grateful smile washed over her face. “Thank you,” she said. “I’ve been waiting for this for a very long time.”

Many people, young and old, bristle at the idea that Clinton’s gender might factor into their decision to vote for her. Gender is not the main reason I support Clinton, but it certainly matters to me. And regardless of whether it mattered to us at the convention or millions others watching with baited breath on television screens, there was a strong recognition in America and across the globe that we were all about to witness history.

While I believe Clinton’s gender matters for many important reasons, my support for Hillary stems from something deeper. Clinton is a brilliant, hardworking politician who has devoted herself to public service, and I look up to her immensely. President Obama’s words at the convention resonated with me when he stated, “I can say with confidence there has never been a man or a woman more qualified than Hillary Clinton to serve as president of the United States of America.”

Despite this—or maybe because of it—Clinton has been subject to every criticism possible about her personality to her appearance to her voice and more. And yet, she soldiers on, fighting her way through the long and grueling campaign season. Perhaps it is fitting that her final hurdle before reaching the White House would be defeating a morally-bankrupt upstart with no political experience who President Obama recently stated is “unfit to serve as President.”

Clinton’s nomination is a win for all the smart girls of the world, as Jill Filipovic wrote last month. She’s “a go-getter, a hard worker, not immediately likable, uncool, but still, just maybe, the future president. A girl-nerd turned lady boss. One of us.”

Clinton represents many things to me, but most importantly, in her I see myself. I see myself at 12, nervously entering my middle school’s band room with my saxophone. Not only was I the youngest member of our school’s jazz band by a full year, but I was also the only girl. The boys in the class would tease me, but they soon found I could easily keep up with them while playing, and they began to respect me. Whenever I see Clinton, the nerdy, passionate, saxophone-playing girl in me feels like she now belongs anywhere, from the middle school jazz band to the Oval Office.

After letting my volunteers abandon their posts to watch Chelsea introduce her mom, I deserted the media entrance to find a spot to watch Clinton’s speech. As the video detailing her commitment to public service began, chronicling her time at the Children’s Defense Fund and her work with September 11 first responders, I felt tears rolling down my face.

The tears continued when Clinton took the stage to what felt like ten minutes of applause and chants of “Hil-lar-y!” And although I expected the tears to continue throughout her speech, they stopped. I was still emotional, but seeing Clinton on that stage felt more than simply historic in a way that was revolutionary. It felt normal. It felt natural. It felt right. Clinton said in her speech, “When there are no ceilings, the sky’s the limit.” That final glass ceiling has not been shattered yet, but thanks to Clinton, girls everywhere can see the light shining through. We can finally turn our dreams to the stars.