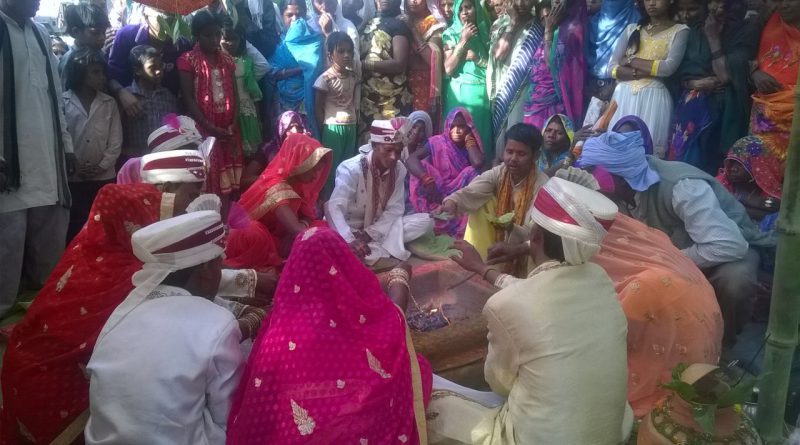 “Birth. Marriage. Death. In India, these three landmarks are celebrated with zeal,” says Rajneesh Yadav, the India Country Director at Free the Slaves, an international NGO working to eradicate sex trafficking and debt bondage. “When families refuse to perform the rituals associated with each of these events, they are considered social outsiders,” explains Yadav.

The ceremonies that commemorate a marriage are extravagant: fancy locations, lavish clothing and opulent jewelry are hallmarks of an Indian wedding. India buys anywhere between 800-1000 tons of gold annually, and is the world’s second largest consumer of the metal. Almost 60 percent of this demand can be attributed to bridal jewelry—in a country with an annual GDP per capita of $1805.

There is tremendous social pressure to spend on weddings. Low levels of education, poverty, and caste-based discrimination compound these pressures. Nearly sixty percent of Indians do not have functional bank accounts, making it impossible for them to request viable loans. So when poor families require large sums of money for a child’s wedding, they invariably turn to upper-caste moneylenders. They are rarely able to repay these debts because moneylenders impose annual interest rates of over 100 percent, according to Yadav.

As a result, poor families are often forced into labor. Although Indian law prohibits any form of forced labor, the poor are typically unaware of their labor rights. They fall prey to unscrupulous creditors who demand physical labor as collateral on loans. Entrenched in the caste system, debtors do not feel empowered to question upper-caste creditors who impose such illegal stipulations. Invariably, they become bonded laborers who toil in brick kilns, rice mills, construction sites, mines, steel factories or fish farms. Many work in scorching heat for over 14 hours a day. Law enforcement is negligent, with local authorities only occasionally investigating reports of debt bondage. When cases actually make their way to court, ineffective prosecution, case backlog, and under-prioritization lead to traffickers’ acquittals.

While both families experience wedding pressures, the bride’s family often bears the brunt of the debt. Despite the 1961 Dowry Prohibition Act, the practice of presenting a dowry, a payment in cash or kind, persists in India. In the northern states of Bihar and Uttar Pradesh, the groom’s family typically asks that the bride’s family cover the entire cost of the wedding. Occasionally, grooms’ families also expect—and indeed, demand—expensive gifts such as refrigerators or bicycles. As the financial pressure grows, the bride’s family has no access to liquid capital but from moneylenders.

Anti-dowry and anti-bondage policies exist, but the Indian government must improve implementation on the ground. Data on law enforcement and types of sentences given to enslavers remain hard to obtain. Even though the Ministry of Home Affairs recently reassessed its strategy for statewide Anti-Human Trafficking Units—programs that train law enforcement to better identify and investigate slavery—most states do not have these units at all.

Certain government programs are well intentioned but devised without an understanding of on-the-ground realities. For instance, the government recently created the Sukanya Samriddhi Account, a money-saving program for parents of female children. A legal guardian can open a bank account for his or her daughter at any time until she turns ten. They must only deposit 1,000 rupees (around $15) in the account to open it, and the money earns interest at a generous annual rate of 8.6 percent. But the major obstacle is that many rural families do not know how to open bank accounts.

While the government struggles to implement policy, civil society organizations and NGOs are slowly shifting the needle. Pragati Gramodyog Sansthan (PGS), Free the Slaves’ local partner in Uttar Pradesh, and a federation of quarry miners came up with one way to combat debt bondage: they organized a group wedding. Five couples shared the financial burden of the event by getting married in the same location at the same time. Inspired by these families’ efforts to avoid debt, the local community also contributed small amounts to fund the event. A typical wedding in these areas usually costs approximately $750. In this case, each family only paid $15 for the ceremony. One thousand people attended and saw how these five couples defied societal norms; slavery survivors (not expensive wedding planners) organized a simple ceremony for the couples with the purpose of preventing the families from accruing crippling debt. “This event has encouraged the concept of community social responsibility,” says PGS Director Sunit Singh.

Although limited in its scale, such group weddings demonstrate how communities balance tradition and practicality. In an interview with PGS, Sharda, one of the grooms, said, “I am happy to [spend] time with my wife—[time] I would have given to a contractor to repay a debt.” Sharda’s new wife, Ranjana, also explained that she participated in all her wedding day customs without feeling apprehensive about her parents accruing dangerous debts.

These innovative practices provide a sense of hope, but weddings still remain one of the primary avenues through which individuals fall into debt bondage. Prevention methods do exist but an inefficient Indian bureaucracy stymies progress. For instance, education is a critical, long-term solution to marriage-related debt; it not only empowers women to challenge illegal practices like dowry, but also helps men fight the pressures that dictate they conform to such social norms.  Federal education policy that aims to bridge the gender gap and battle social prejudices exists, but has not led to systemic change in practice.

Short-term solutions to debt bondage are a step in the right direction. Establish Anti-Human Trafficking Units in all states. Improve the resources of current units by increasing staff and training them effectively. Eradicate corruption within these units and encourage them to penalize all forms of slavery—debt bondage is often swept under the rug when upper-caste moneylenders bribe local authorities. Increase government transparency regarding the investigation and prosecution of exploitative moneylenders and establish fast-track courts that address debt bondage allegations. Create better rehabilitation centers that help slavery survivors re-integrate into society.

These are only a few solutions to a seemingly intractable issue. Hopefully, as the government and civil society implement initiatives, we will begin to see positive change. At the moment, India still has a long way to go.

Malika Noor Mehta is a Master in Public Policy student at the Harvard Kennedy School. She spent the summer of 2016 as the India Programs intern at Free the Slaves. She also works closely with the organization’s Monitoring, Learning & Evaluations team on India-focused research and data analysis. She was previously a Teach for India Fellow in Mumbai where she taught thirty-five 3rd and 4th grade students.