Home > Articles > Not as Seen on TV: My Week at the RNC 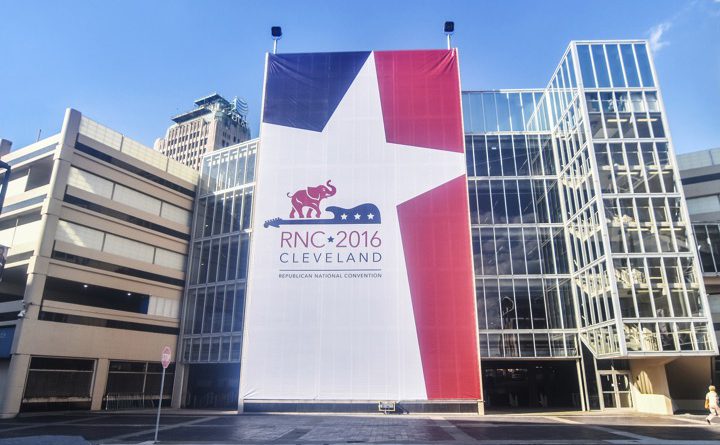 For some of us, it’s been hard to be a Republican the last few months. I have found it heartbreaking to watch my party nominate a candidate who seems in many ways anathema to the principles I hold dearest. Lately, I’ve felt obligated to qualify my opinions with “I’m a Republican, but…” as I try to hide a vague sense of embarrassment over the result of the GOP primaries and the unresolved division within the party.

I had been given an opportunity to volunteer at the Republican National Convention in spring, back when it looked like it we’d be picking our candidate on the convention floor. I wanted to see the action. Packing my car for Cleveland and heading into a very different event from the one I had imagined, I had to wonder: Will this convention just add to my disappointment? Will the guests be like those racist Trump supporters at rallies we’ve all read about? Will I feel completely out of place? Will I even feel safe?

The short answer is that nearly every one of the hundreds of people I met over the next four days defied my worst expectations and exceeded my best, even as Trump himself fell far short of my hopes for the candidate he might become. My week working alongside good, kind and passionate Republicans from all walks of life can be summed up as “not as seen on TV.”

I spent nearly all my waking hours inside the Quicken Loans Arena security perimeter, disconnected from news media. When I did check on the news, it almost seemed like I was at a different convention entirely.

I didn’t know until the next day, for example, that Melania’s partially plagiarized speech (not the first of its kind) was dominating first-day headlines, rather than the content of other speeches on our nation’s security. I only learned about Representative Steve King’s deeply ignorant commentary days after noting that nearly every speaker made explicit and unprecedented efforts to focus on groups not often associated with GOP priorities, including African-American and LGBT communities. Trump’s plane flying over Senator Ted Cruz’s rally was on a repeat loop for viewers at home at the very same moment that I was listening to a black Cleveland pastor deliver a spirited assurance that Trump would do better than Obama has on issues like high minority unemployment. These on-stage promises and their warm reception may be small steps, but they are steps in a direction that I and a lot of other voters would like to see the GOP take—is it a coincidence that they don’t get much coverage?

The most interesting part of a convention, though, is what happens off-stage. The special thing about an event like this is that everyone, from food service to volunteer to reporter to delegate to guest, has an opinion and wants to talk about it. I met people who had been Trump supporters from day one and even more who jumped on board once he became the nominee. Their reasoning by and large sounded a little different than what we get from the media’s rare and feeble attempts at “humanizing” already human Trump supporters.

Their reasons for support mostly focused on the issues rather than the man himself: Clinton’s foreign policy has been disastrous abroad and made us less safe at home. Our economic recovery has been abysmal, stifled by over-regulation, and jobs are a top issue for nearly everyone in every demographic (because that 5% unemployment rate the Obama Administration celebrates doesn’t tell the whole story). Race relations have gotten worse under Obama, they lament, not better. They also tend to (incorrectly) believe that crime is rising, fueling their cheers for the self-proclaimed “law and order candidate.” Most consistent was the ubiquitous and unrelenting love of our Constitution, and the faith in the power it lends us to check our executive branch—insurance against a President Trump that runs rampant or simply does a bad job.

A summary, however, can’t do them justice.  My experience is best illustrated by any number of the unexpected exchanges I was a part of during that week, like on the third night, when I found myself on a bus around 1 am with two other volunteers I had met earlier in the day: a 40-year-old black single mother from Indiana and a 50-something white farmer from Georgia.

They quickly bonded over their shared support for Trump from the moment he announced his candidacy. In 20 minutes they had the most candid conversation about race I’ve ever heard two people of different races have (including while I was at Harvard). Above all else, they were both worried about unemployment and lack of mobility for low- and middle-income families. They agreed that the “same old thing” wasn’t working, and that “Trump’s certainly something different.” No one can argue with that.

What about the reports that Trump and his supporters are all racist? he asked her. “I am sick and tired of that,” she answered. “If any of us want things to get better, we need to be able to get jobs. And there need to be jobs there for us to get. Period. It’s common sense. And I don’t care what dumb comments [some of his supporters] want to make—he wants to make jobs for all of us, including black folks, and he’s said as much. And he’s done it before. That’s all I care about. And I’ll tell you what else—whoever’s polling saying black people don’t support Trump? Well, they aren’t asking rural black folks, not us out there in Indiana. I’m doing work out there. We’ll show them.”

Getting off the bus, I heard her parting words for her new friend: “He may not be what they wanted but I’m putting my faith in God that he’s the thing we need right now. And if it turns out he’s not? Well, we’ll go get us a new one.”

When the balloons came down the next night, an a cappella recording sang “you can’t always get what you want, but sometimes, you might find you get what you need.” I laughed to myself and wondered where that Indiana mother was in the crowd, before wondering whether my laughter looked too much like celebration.

But for a brief moment, I was, in fact, celebrating something. I walked away from that night comforted by a newfound certainty that Trump’s nomination does not define his party or, most importantly, many of his own voters in the ways you may assume. I feel more confident than ever that a Trump nomination and even a Trump victory will not derail at least a large portion of the party from its core principles, and that the American people (not to mention the legislative and judiciary branches) will not allow it to derail the country, either.

I also left inspired by the call to action to which so many of my peers there were already answering, by coming to Cleveland and by being active in local politics back home, supporting candidates they believe in. They understand that now is the time to make their voices heard and to shape a GOP that will represent them in elections to come.

I am not proud of my party’s nominee this year. But despite that and how I felt going in, I’m happy to say that I left Cleveland proud to be a Republican.

Rachael Stephens completed her Master in Public Policy at the Harvard Kennedy School this spring. She’s currently interning on a U.S. Senate campaign in Maryland and will be joining Third Way, a centrist think tank in D.C., as their Economic Policy Fellow this fall. Previously, she spent three years developing and managing workforce development programs for low-income adults in in New York City.