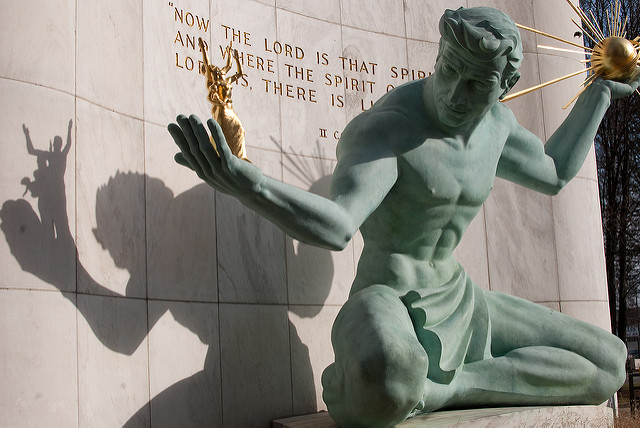 BY ANDREA BLINKHORN AND JONATHAN HUI

Driving down Puritan Avenue in the Martin Park neighborhood in northwest Detroit, it’s hard not to feel a sense of emptiness. Many houses are boarded up and crumbling, lying in a state of long-time disrepair that belies the ornate architectural styles that used to define the city.

A short drive downtown and the scene is much different. The recently renovated Campus Martius Park and Riverwalk are indicators of attention from big time investors into the revitalization of Detroit following the bankruptcy in 2013. New shopping centers, restaurants, and luxury stores signal the city’s resurgence and focus on attracting a new generation of young professionals.

Two contrasting parts of the city. Two distinct experiences for those living in Detroit.

On the one hand, young professionals are being drawn into tech-focused jobs advocated by the city and largely filled by Dan Gilbert’s Rock Ventures, the multi-million dollar umbrella conglomerate for Gilbert’s immense portfolio. On the other, blighted neighborhoods with one working street light force children to walk to school in the dark, risking personal safety walking through rows of abandoned homes.

The gap between the two different parts of Detroit is troublesome but unsurprising. In cities across America the inequality gap is growing, and gentrification is pricing long-time community members out of their neighborhoods.

Driving through Detroit, it’s hard not to wonder if Mayor Mike Duggan’s focus on population growth as the key indicator of progress is the best metric for the city’s development. Young talent is incredibly important, but does it come at the expense of further dividing the city?

This question is on the minds of many organizations working in the city. From the Mayor’s office and one of the city’s most well-known philanthropic non-profits, the Kresge Foundation, to local Community Development Corporations and nonprofits such as Live6, the tension of what growth means for the city and its inclusiveness (or lack thereof) comes up in nearly every conversation.

In the neighborhoods, there is a feeling that the city’s development priorities, aimed at attracting young talent and courting the wealthy, are coming at the expense of long-time Detroit residents. One of the main investors in the city’s economic growth, Rock Ventures, has recently begun to acknowledge these concerns. In addition to projects intended to attract more talent downtown through programs like Opportunity Detroit, an initiative aimed at branding downtown Detroit as an attractive place for young people to live, Rock has begun Placemaking Partnerships, a program designed to unite community members behind the renovation of public spaces. Furthermore, the organization has begun small home revitalization projects in neighborhoods like Brush Park, where there is a commitment to restore 8.4 acres of land and build 337 new housing units. While the intentions behind these revitalization projects are undoubtedly good, a question remains about whether or not the projects are really beneficial for the neighborhoods. Do these well-intentioned policies take into account local voices and the reality of the needs of the neighborhoods?

Despite the city’s rapid growth, statistics show that Detroit remains one of the most divided and segregated cities in the country. Its unemployment rate, at 10.4 percent, is nearly double the state average. Yet despite the lack of employment opportunities for locals, there is an ongoing push for population growth by attracting young professionals into the newly revitalized downtown and midtown. While residents who have lived in the city for decades still lack jobs, rent prices are increasing at 6 percent a year, faster than Los Angeles and Boston.

There is no doubt that things are changing for the better in neighborhoods. Last year, Mayor Duggan secured 80 new buses for the city, allowing the transportation department to return to a full bus schedule in years. A city where less than 60 percent of street lights were functioning in 2013 saw a the number of street lights double in two years. These improvements are the bedrock of the city’s recovery.

Despite the tremendous growth, a tension remains between the intention of the new changes and whether or not they reflect the true needs and priorities of all of the city’s residents.

During an Urban Innovation spring break trip to the Midwest, community groups repeatedly brought up two themes about the city’s development. First, they stressed the importance of developing trust between civic and business leaders and community members. They were not opposed to the exciting developments in the city’s downtown core; they simply wanted their voices to be a part of those development strategies. For example, some local business owners in the McNichols and Livernois corridors bordering the Martin Park neighborhood felt that their voices were rarely sought out for questions of development. They are represented by Live6[1], a planning and development organization focused on attracting small businesses, enhancing safety, and developing commercial and real estate properties in that neighborhood. This is surprising, given Live6’s close ties to the neighborhoods and strong relationships with the city and organizations like the Kresge Foundation.

The second theme community groups emphasized was using incremental efforts as a vehicle for sustainable change. Change in a community requires its residents to take ownership, something that comes with time. Even the tremendous growth of the Midtown district was a result of more than 20 years of persistent engagement and perseverance by organizations like Midtown Inc. Much of the current success was not realized until over 10 years after the organization began their work in the area. Revitalization in that neighborhood was not flashy at the beginning: it consisted of building green spaces, streetscapes, and shared amenities for community members to enjoy. Midtown Inc. focused on incremental change – starting with the building blocks to fulfill the community’s most basic needs, and over time, invited them to formulate a vision for their neighborhood.

The more you listen to various stakeholders within the city, the more you realize that there is no “right” way to engage communities. Every organization and community has a different answer. There is no silver bullet; rather, sustainable and inclusive change requires a deep understanding of the context of a community. It’s not just about what can be done to engage residents, but what can be done to take their voices into account. The Skillman Foundation, for example, focuses on developing capacity within communities. They spent 10 years in six of the most distressed neighborhoods in the city and built up leaders who eventually led coalitions to rally an entire community around development priorities. Rather than dictating the direction for a community, they empowered the community residents to lead change that truly reflected their interests. Organizations like Live6, too, should have a voice in the city’s growth given their unique placement as a neighborhood organization focused on business development and building trust amongst the neighborhoods.

The residents of Detroit are not resistant to change. And it is important to note that downtown and midtown development is critical for the city’s growth. What matters is whether or not it’s incorporating neighborhood support and how it will be sustainable in the long run. The story of Detroit is one of perseverance, built on the foundation of the family. As the “Spirit of Detroit” statue in front of city hall represents, the strength of the city lies in relationships and family. Therefore, bridging the gap between the two Detroits will require the involvement of those with a genuine, deep understanding of the community’s context, alongside those who bring a forward-looking vision and investment.

Andrea Blinkhorn is a Master of Public Policy candidate at the Harvard Kennedy School. Before coming to the Kennedy school she worked at the U.S. Committee for Refugees field office in Albany, N.Y., where she worked on job placement services and community partnership building.

Jonathan Hui is a Master in Public Policy candidate at the Harvard Kennedy School. Previously, he taught social studies and directed community development initiatives, including youth employment and career readiness programs, at a public high school in Detroit, Michigan.