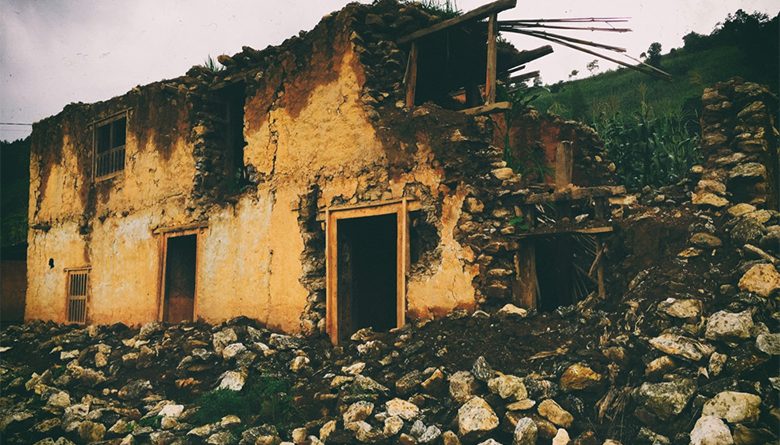 Kami Chiri Sherpa had high hopes for himself and his family. He dreamed of leaving his job as a trekking guide in the Solukhumbu region of Nepal for a job in Poland, where he could make more money and provide his family with a better life. A couple of years ago, he came in contact with a recruitment agent who promised to take him there. Kami paid the agent around $2,500, almost his entire life’s savings. After waiting several months, Kami found out that he had been cheated. He now faced a daunting task of providing for his wife and six children.

When the earthquake struck that fateful April afternoon last year, Kami had already moved with his family to Dhoksan, a scenic village about 25 km northeast of Kathmandu, Nepal’s capital city. He was working as a carpenter and had managed to build a small shelter that he and his family called home. That day, Kami’s house, which was made of mud and wood, collapsed, as did 90 percent of the houses in Dhoksan and hundreds of thousands of homes in Nepal. It seemed that bad luck followed Kami no matter where he went. This time, an entire country shared his misfortune.

That afternoon, Pratisha Shakya, a landscape architect professional, was returning from a banquet at a nearby college in Little Rock, Arkansas, when she received a call from her brother. At the other end, her brother told her that a huge earthquake had just reduced several buildings, including the iconic Dharahara tower in Kathmandu, to rubble. When she got home and logged onto the internet, Pratisha could not believe what she saw. In the days that followed, she spent hours reading news and updates of the continuous aftershocks. That is when she heard about a reconstruction project started by Bibeksheel Nepali, a relatively new political party led by young, socially conscious professionals that brands itself as building 21st century leadership in Nepal.

The idea was not just to reconstruct buildings or destroyed infrastructure, but to build a self-sustaining “model village.” Bibeksheel Nepali wanted to guide people to rebuild their village themselves after the devastating earthquakes, and by helping people be independent rather than wait on NGOs and government organizations, Bibeksheel Nepali also hoped to create a sense of ownership for what they were building, minimize dependence on donor agencies, and teach people income-generating skills. Many organizations such as the Accountability Lab and Search for Common Ground are using similar community-driven approaches to tackle deep-rooted problems such as corruption and conflict in Nepal.

Bibeksheel Nepali chose Dhoksan, where Kami and his six children now lived in temporary camps, as the first location to test out this concept because of the village’s strategic location along the Chisapani-Nagakot trekking route and the wide scale of destruction. But Bibeksheel Nepali needed architects, urban designers, and engineers to model the reconstruction of Dhoksan. Pratisha found out about this, quit her job in the United States, and booked a one-way flight to Nepal to help.

Upon returning to Nepal, Pratisha worked with Bibeksheel Nepali and Haushala Foundation, a Kathmandu-based NGO, to design a training hall in Dhoksan, which would be used to train locals in construction work so that they could reconstruct their own houses and eventually the houses of other people and make a livelihood in the construction sector. The training hall was named “Bhukampa Karkhana,” or “Earthquake factory,” to inspire and unite locals despite the damage associated with the term earthquake. The first batch of masonry and carpentry training is currently under way with 20 participants, including 8 women and 12 men. One of the locals in the first batch of training is Kami, who continues to fight bad luck with a big, cheerful smile.

The concept of “model village” starts inside the training hall where locals will eventually learn trades in construction, hotel & resort management (because of the touristic appeal of Dhoksan), carpentry, machinery, sewing, and agriculture. The consortium working on this training plans to use locals and locally procured supplies to build a resort in the area. The team aims to eventually re-build Dhoksan as a self-sustaining village.

After the earthquakes in April and May, several media outlets complained about the shortage of local labor for reconstruction because of the large exodus of young Nepali men to foreign countries. As of 2014, about 2.2 million Nepalis, or roughly 10 percent of Nepal’s population, worked abroad. But not as many spoke about Nepal’s massive youth underemployment among those who remained in the country. About four in 10 Nepalis were underemployed as of 2008. The “model village” concept’s vocational training can help Nepali youth make a living out of the subsequent reconstruction projects that are likely to come thick and fast over the next several years.

The international community showed an incredible amount of solidarity for Nepal and Nepalis immediately after the quakes last year. To add to that, NGOs, civil societies, armed forces, and self-deployed youth came together to save many lives and set an example for the kind of response Nepalis should expect and deserve in the long-term. But when it was time for the Nepali government to step in and lead the reconstruction phase, everything started falling apart. Reconstruction did not begin in time for the rainy season following the earthquake; it did not begin in time for the brutal winter six months after the quake; and now as we near the unfortunate one-year anniversary, there is still no sign of reconstruction.

However, to complain and lament what Nepalis don’t have would do injustice to the enthusiasm and cheerfulness of Kami, hard-work and determination of Pratisha, and tireless efforts of organizations like Bibeksheel Nepali, Haushala Foundation, and many others who seek to fulfill their responsibility within the current system (or, rather, despite it).

Pratisha is now back in the United States after spending seven months working on the reconstruction project in Dhoksan, and along with other non-resident Nepalis in the area, she has set out on another mission. She wants to raise one dollar each from 100,000 people in the next year to contribute to the second phase of reconstruction in Dhoksan.

In February and March this year, I was a volunteer for the Dhoksan project when I went back home to Nepal. It had always bothered me that immediately after the earthquakes last year, I chose to stay in Cambridge for my Harvard Kennedy School graduation and did not go back to help out. Perhaps that is why Pratisha’s story caught my attention.

When I visited the project sites and talked to locals who were being trained, they told me about the solidarity shown by fellow Nepalis towards each other during and after the quakes. And while we are often quick to highlight what outsiders have done for our country, we often overlook this giving nature of Nepalis themselves, which was a big reason for the success of immediate relief and rescue efforts after the earthquake.

A few days after the earthquake last year, a Kiwi journalist tweeted a picture of an old Nepali women with the caption, “This amazing woman tells me she lost everything in the earthquake, and then offers me lunch. Humbling.” As Nepalis, we are taught to give unconditionally. Every foreigner that visits Nepal has been and will be a witness to this culture of hospitality. Over the course of the last year, friends and well-wishers have often asked me how they can help Nepal during these darker times. I have always said that if you want to help Nepal, go and explore Nepal as a tourist. And if you are short of time and resources to make that journey for now, then you can help in the interim by being a part of this one-dollar drive to rebuild Dhoksan.

Kami and I chatted outside the training hall in Dhoksan after class one day. He remembered the often-used Nepali saying that roughly translates into “There is a pot of gold in Lhasa (Tibet) but I have no jewelry,” which means that merely dreaming of a better life without working toward one’s dreams is like having an imaginary pot of gold in Lhasa (Tibet). He says the biggest lesson he has learned over the past couple of years is that there are no alternatives to hard work, be it for Nepalis working in Malaysia, Qatar, Poland, or at home. He said he is happy that he is learning skills that will help him transform his current village in the near-term, and he is hoping that eventually the same skills will help him transform his future too.

You can read about and contribute to the initiative here. Further information about rebuilding Dhoksan can also be found in Haushala Foundation’s page here.

Samik Adhikari is a graduate of the Master of Public Administration in International Development program at Harvard and an affiliate volunteer with Bibeksheel Nepali.