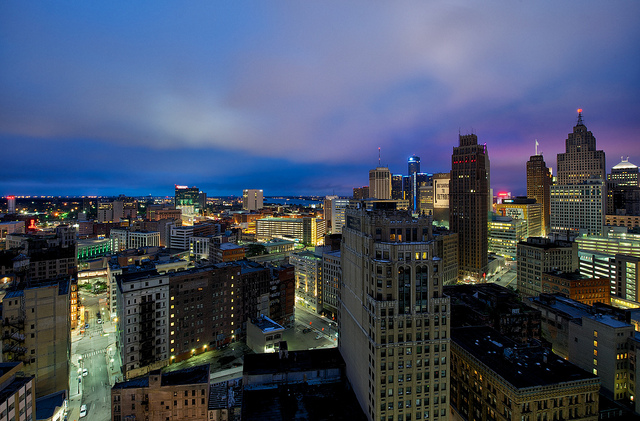 How does one measure urban revitalization? For the Kresge Foundation in midtown Detroit, it is the sound of hammers clanking on steel beams as formerly empty lots surrounding its offices finally undergo construction. It’s bulldozers and work crews tearing up Woodward Avenue to install tracks for the new M-1 line, a light rail system that will eventually connect Detroit’s downtown and midtown, the hub of the city’s post-bankruptcy resurgence. For Mayor Mike Duggan, there is a single statistic by which he measures success: Is the city’s population growing? This would be quite an accomplishment, as it would reverse a 60-year trend of decline, and there are some indications that 2015 may have experienced an uptick.

There is no doubt that there is a buzz, an excitement, in Detroit. For anyone taking notice, one cannot help but feel the urgency and activity as the city comes back online. Even as the challenges remain immense – from diverting the number of foreclosures to tamping down the rate of gun violence – there is a sense that brighter days are ahead.

As part of the Urban Innovation Trek, a Spring Break trip in which participants traveled through the urban Midwest, the visit to Detroit began at the offices of Kresge, a grant-making foundation working to improve the quality of life and opportunity in America’s cities. The space is a retrofitted loft that shares the unit with a coffee shop serving $5 cups of joe, a particular sign of urban revitalization. We were briefed on the dramatic changes happening in Detroit. Beyond physical improvements to the city’s Riverwalk and Campus Martius Park, Kresge is an important policy partner for the city of Detroit. It has been influential in spurring projects and initiatives in the areas of housing, education, health, and sustainability. The organization’s work on a lending program that fills the credit gap between purchasing and rehabbing homes is crucial to spurring positive residential development in the neighborhoods. It is the type of policy that, once implemented, you wonder why it took so long to figure out. That is to say, it is brilliant.

But as one delves more deeply into Detroit, a stark juxtaposition begins to form. While city officials and private sector firms present the rosy picture of new retail venues, hip restaurants, and sleek downtown living, residents in the neighborhoods offer a different reality. The blighted homes and industrial parks are found here, signified by their crumbling facades and the tangled plant life that seeps through cracks in dilapidated walls. Some factories have lain dormant and in disrepair for longer than they were ever in operation. This is the exploited face of Detroit, the “ruin porn” that adorns magazine covers. It is the physical reminder that a city that once housed 1.85 million people now finds itself with a population of less than 700,000.

For me, this is the crux of the challenge for Detroit. How do you right-size a city that has undergone such pronounced demographic shifts? How do you ensure adequate service provision over a land area the size of Boston, San Francisco, and Manhattan combined in the midst of extremely limited resources? How do you encourage investment in parts of the city with growth potential without completely isolating other neighborhoods? There is clearly fervor for addressing these questions, and the talented professionals flooding into Detroit at the behest of the mayor and other foundations are hoping to answer them.

In the meantime, I struggle to wrap my mind around a city that has a brand-new John Varvatos store with its $200 t-shirt on display, but that can barely provide one street lamp per block in its neighborhoods. The M-1 line, once completed, will no doubt be a boon to the Woodward Avenue corridor, especially as it passes by the new hockey arena, funded in part by a quarter of a billion dollars of public subsidy. At the same time, though, bus service across the city remains severely limited and fragmented.

Let’s be clear: these divides are not unique to Detroit. Growing inequality, especially in our cities, is part of a broader American trend (see Chicago, New York, and San Francisco), but these questions about inclusivity and fairness feel more immediate and essential in the context of Detroit’s rebirth. This is because Detroit is such an open canvas for development. The innovations and experiments of urban policy will be tested here. The leaders and thinkers entrusted with designing a new Detroit must engage with these tensions. They must be prepared to listen and not just lead. And through this community engagement, they must navigate a path that doesn’t affirm a downtown-neighborhood divide, but figure out a way to transcend it.

Michael Good is a second-year Master in Public Policy student at the Harvard Kennedy School and graduate of the University of Illinois at Urbana-Champaign. Before coming to the Kennedy School, he taught high school social science for five years in Chicago, his hometown. His main policy areas of interest are in education, school budgeting, and public finance.