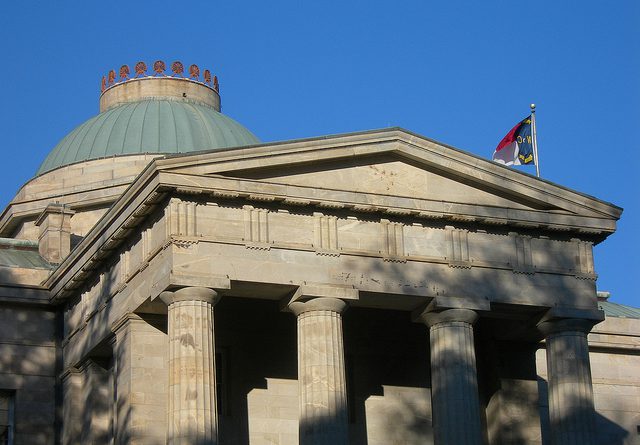 If you’re from North Carolina like me, your social media feeds blew up last Wednesday afternoon.

#wearenotthis. “We” being North Carolinians. “This” being HB2, the sweeping anti-LGBT legislation passed last Wednesday in a specially-convened session. HB2 prohibits transgender residents from using restrooms that match their gender identity and also nullifies municipal anti-discrimination laws, meaning that LGBT individuals in more than a dozen cities throughout North Carolina are now subject to firing and other workplace discrimination.

This is not the first time North Carolina has passed a controversial law, and I’m sure it won’t be the last. But I’ve begun to notice an alarming trend on my Facebook feed. The majority of people posting their dismay and anger at North Carolina’s laws no longer live in North Carolina.

We left. For school, or jobs, or for big cities. We watch as our home state legalizes discrimination while we sip our lattes in our more liberal outposts, posting on Facebook about how disappointed we are.

Maybe we’re relieved that we’re no longer in North Carolina. “I’m so glad my tax dollars are not going to this state” has gone through my mind many times. My heart warms every time California and Massachusetts, my more recent homes, pass progressive laws.

#wearenotthis. Yes, this law doesn’t represent us. But we are not part of the process any more, either.

The most poignant post I’ve seen over the past few days expressed frustration – not at the legislators themselves – but at the hordes of people posting on social media. “Did you vote last Tuesday?” a friend asked some online ranters. “Will you vote in November?”

Social media has become a place for us to voice our joys and frustrations at policies that are passed. But too often, we stop there. We post, we feel better, and we move on to the next thing.

My friend had a point. People shouldn’t post frustration on social media unless they have at least taken the basic civic steps, like voting, to try to stop it from happening. For those of us who no longer live in North Carolina, voting there isn’t really an option or a right we have any more.

We can advocate from afar and urge our still-local friends to get involved. In the end, though, the democratic process gives residents the power to choose their elected officials, and outsiders are just that: outsiders. If a non-Californian tried to interfere with our elections (Proposition 8 comes to mind), I’d tell them to stop meddling. You left, go back to your new state, and get out of our politics.

This time, unlike with North Carolina’s gay marriage ban or stricter voter ID laws, I chose not to post on social media. As I read article after article, my blood pressure rising, I realized that posting one of these articles online was going to accomplish nothing. Maybe it would pacify me, and remind my friends that I agree with them, but it wasn’t going to get anything changed.

When our news feeds dry up, nothing will have changed. We will move on, and the law will stand.

In the end, however, it’s about more than us, or even our friends and families still in Raleigh or Charlotte. It’s about that transgender child in a small town, who we’ve never met, who now can’t use the bathroom at school. Who doesn’t have anyone to confide in or talk to. Who thinks that no one is on his or her side. Who is now subject to blatant discrimination because this law has nullified what might have protected them.

Our social media is never going to reach them, and neither are our out-of-state votes. We are posting and ranting to our friends, but none of that is helping. That is not okay.

This is about more than bathrooms. It’s about questionable measures to create a separate underclass of citizens and rationalize blatant discrimination against them: a tactic we thought the South left behind years ago.

At an LGBTQ conference a few weeks ago, I was delighted when one of the trans activists mentioned in a panel discussion that they were from Raleigh. I stayed after to introduce myself, as I feel an automatic kinship with North Carolina transplants.

“Your life must have changed so much when you moved from Raleigh to New York,” I commented. This was code for “your life must have gotten so much easier!“ It had to have, right? North Carolina isn’t exactly a friendly place for trans-identifying people, even without this law.

“I LOVE Raleigh! I’d move back there in a heartbeat.”

The response smacked me back to reality. I love Raleigh, too. But now my new trans friend, whose sentiments about Raleigh were so loving and positive, would be a second-class citizen upon moving back. And there’s nothing I can do about it. Or is there?

Maybe we need to put up or shut up: either stop complaining about something we can’t control, or go back and do something about it.

Andrea Sorce is a second-year Master in Public Administration in International Development student at the Harvard Kennedy School and a graduate of the The University of North Carolina at Chapel Hill. Prior to coming to HKS, she worked with education non-profits in California and served with Peace Corps in Honduras and El Salvador.