Home > Articles > “Anti-National” Speech Is Not A Crime 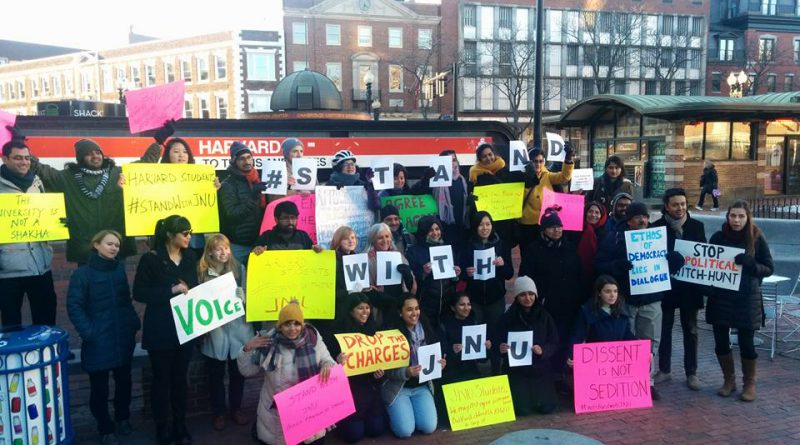 Kanhaiya Kumar’s arrest for sedition in Delhi is a violation of his constitutional rights.

The actions of the Indian Government and the Delhi Police last week against students at the Jawaharlal Nehru University (JNU) in Delhi violated the fundamental principle of free speech and expression in the world’s largest democracy.

JNU student union leader Kanhaiya Kumar, 28, was arrested on February 12, for the use of “anti-national” slogans at JNU. The government invoked the laws of sedition to justify his arrest. Sedition has an ugly history in India. Section 124A of the Indian Penal Code was created by the British Raj in 1860 and used to suppress the Indian independence movement that had begun in full force a few years prior by cracking down on free speech. In a 1922 speech, Mahatma Gandhi, one of many imprisoned under Section 124A, called it “the prince among the political sections of the Indian Penal Code designed to suppress the liberty of the citizen.”

Kumar’s speech to JNU students the day before he was arrested criticized the Rashtriya Swayamsevak Sangh (RSS), the right-wing Hindu parent organization of the ruling Indian Bharatiya Janata Party (BJP) party. Ironically, Kumar spoke about the RSS’s narrow definition of nationalism. He argued, “we don’t need the certificate of patriotism from the RSS. We don’t need a nationalist certificate from the RSS. We belong to this country. We love this country. We fight for the 80 percent of the poor population of this country.”

A video of Kumar chanting Kashmiri separatist slogans at another event at JNU two days prior then began to circulate online, fuelling support for “anti-national” and seditious charges against Kumar. The event commemorated the hanging of Afzal Guru – a Kashmiri separatist who was convicted for his role in an attack on Indian Parliament in 2001.

The video appears to have been doctored. Kumar had no role in the organization of that event, nor did he speak at it. Members of the government and sections of the media briefly played up allegations that Kumar and another student present at the pro-Kashmir gathering worked for terrorist groups. They backed away from these claims once they were proven false.

Even if Kumar had played a larger role in organizing pro-Kashmir event or chanted “anti-national” slogans, however offensive, a claim of sedition is still a stretch. Kumar’s alleged words needed to have an active, direct, and imminent incitement to violence, which India’s Supreme Court has repeatedly ruled must be present to be constitute sedition under Section 124A.

When Kumar’s sedition case was taken to Delhi’s Patiala House court to be heard after his arrest, he, along with journalists and other JNU students, was physically attacked – punched, kicked, and dragged, while Delhi Police stood by and failed to intervene. No action has been taken against the attackers, who included a BJP member, and lawyers with close ties to the BJP, despite these incidents being caught on camera and the videos (not doctored, on this occasion) being widely shared.

The Indian government has stood by these appalling actions as events have unfolded at JNU. Rajnath Singh, Home Minister, wrote on Twitter: “If anyone shouts anti India slogan & challenges nation’s sovereignty & integrity while living in India, they will not be tolerated or spared.” Smriti Irani, Education Minister, told reporters, “The nation can never tolerate an insult to Mother India.” Prime Minister Narendra Modi has remained deafeningly silent, as the country he governs has erupted into a heated and divided debate, and Kumar is still in jail. His bail plea will now be heard in the Delhi High Court on Monday.

This abusive stifling of dissent must never be tolerated in India, no matter which party is in power. Anyone who is found to have been involved in the doctoring of videos to malign Kumar, along with the lawyers and BJP affiliates who physically attacked students, teachers, and journalists at the Patiala House court, must be brought to justice.

Hundreds of academics around the globe have expressed solidarity with the students at JNU, and support continues to pour in. Even three members of the Akhil Bharatiya Vidhyarti Parishad (ABVP), the student-wing of the RSS at JNU that had initially worked to stop the pro-Kashmir student event from happening, have resigned. “We can’t be mouthpiece of such a govt. which has unleashed oppression on student community,” their statement reads. “[G]ovt which has legitimized the action of right wing fascist forces either in Patiala [H]ouse court or in front of JNU north gate.”

On Thursday, members of Harvard and the greater Cambridge community assembled in protest in Harvard Square. Their right to do so free from arrest, let alone physical assault, is unquestionable. The same holds true for Kanhaiya Kumar, and our other counterparts at JNU. In India, dissent is not sedition, and “anti-national” speech is not a crime. Indeed, as The Indian Express columnist Pratap Bhanu Mehta wrote, “if the definition of nationalism is narrow and pinched-up, if it does not brook serious criticism, if it is aligned with tyranny, if it trades on an anti-intellectual ignorance, and its purpose is to unleash a frenzy of destructive passion, then being anti-national might even be an obligation.”

Uzra Khan is a Master in Public Policy student at the Harvard Kennedy School. She is a Shorenstein Center scholar for media, politics, and public policy and Editor-in-Chief of the Kennedy School Review.