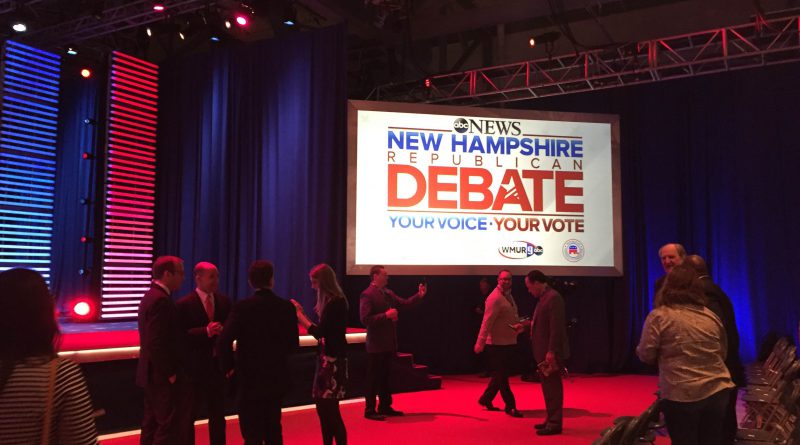 This weekend, I had the opportunity to attend the Republican presidential debate in Manchester, New Hampshire. Just five days after the Iowa caucus, this past Saturday’s debate was important for the current frontrunners and even more crucial for those contenders hoping to remain relevant after the Granite State’s primary on February 9.

What’s the biggest difference between watching on TV and having a seat in the room where it happens? The politically charged atmosphere before the first-in-the-nation primary, the engagement of every voter in the high stakes of election 2016, and finally hearing Donald Trump get booed at full volume.

Before the debate, an air of excitement and civic activism filled every corner of snow-covered Elm Street. There was even a small rally in Veterans Memorial Park, where a group named the New Hampshire Rebellion was protesting the influence of special interest money in politics. At a local pizza joint, with the debate just hours away, you couldn’t escape the chatter and buzz about the event. To my left—and after a quick double take—I noticed Ohio Governor and presidential contender John Kasich strategizing with his aides over lunch. To my right, a group of college Republicans was passionately debating whether Bernie Sanders’ status as the longest-serving independent in U.S. congressional history might prevent Republicans from winning over independents in a general election.

Arriving a couple of hours prior to the start of the event, I talked to as many attendees as possible. During my conversations with roughly 30 debate attendees, I asked each person the same question at the onset: What is this election’s defining issue for you?

Even among my small sample of voters, there was a range of responses, from the economy and national security to immigration and the national debt, and even as specific as tax reform. However, the economy and national security topped the list with an equal number of respondents listing them as their top concerns. This matches a recent Pew Research Center poll, which found that strengthening the nation’s economy and defending the country from future terrorist attacks were tied as the top public priority at 75 percent each.

Even with the unemployment rate falling to 4.9 percent in January—the lowest level since February 2008—fears about the economy were particularly salient for attendees. One college senior told me that he was most concerned about finding a job when he graduates in May. A middle-aged man told me he was primarily concerned with underemployment, stating, “many people I know have jobs, but they’re not the kind of good paying jobs they really want.” Others talked about the need to bring jobs back to our country, and several stated that lessening regulations would be the solution to incentivize corporations to return from overseas. A high school student from California even said that she was most concerned about economic inequality affecting economic growth.

On the other hand, most of the respondents who listed national security as their top issue stated that they were fearful of international terror threats (including ISIS) and expressed a desire to reassert what they viewed as a lack of American leadership in the world. Others said that they wanted to restore military spending. In New Hampshire, military spending equals 2.2 percent of New Hampshire’s GDP—well below the national average of 3.5 percent—which may mean that this desire to restore military spending is more rooted in national perceptions than just regional factors. It’s equally plausible that the rhetoric of presidential contenders like Jeb Bush and Marco Rubio has put defense spending front-and-center in this election.

Several attendees claimed immigration and national security were inextricably linked. When I asked one of the interviewees to elaborate, he said, “It’s not just about keeping people out. We need to figure out who is here and if they are a threat.” Across several conversations, the specter of the San Bernardino tragedy appeared to weigh heavily on voters’ minds.

Watching the debate in person provided a very different experience from the prior debates that I had watched on television. Despite the initial confusion as candidates took the stage, there was energy in the room that began to coalesce around several candidates and issues as the night wore on. Here are my five main takeaways from the debate room:

1. Marco Rubio lost the debate. By almost all objective standards, Marco Rubio had a bad night. This was especially troubling for party elites who viewed Sen. Rubio as the strongest establishment contender capable of beating Sen. Ted Cruz and Donald Trump following athird-place finish in Iowa that exceeded expectations. By parroting the same phrase four times that Obama “knows exactly what he’s doing,” Sen. Rubio displayed a weakness and naïveté uncharacteristic of his prior debate performances. By the third time he made the comment, the crowd met it with a mix of boos and jeers.

2. Chris Christie won the debate. Governor Christie’s debate was largely defined by his quip to Marco Rubio’s looped sound bite, stating, “There it is. There it is. The memorized 25-second speech. There it is, everybody.” The audience howled with laughter. While it was the line of the night, it is important to place its significance into context. Over the past several debates, Christie has been trying to make the argument that senators are lofty orators, but governors actually get things done. Christie was able to capitalize on Rubio’s ill-fated gaffe to reinforce this point that he was a problem-solving, outside-of-the-beltway executive.

3. Kasich embraced his identity as the compassionate conservative candidate. While Christie won the debate, Governor Kasich was a strong runner-up. Given that Kasich is better positioned for a second-place finish than Christie, this debate may have been more consequential for his prospects in the race. His tone was generally optimistic, and he expressed more compassionate views on most issues, including deportation and policing. Describing his vision for conservatism, he stated, “I believe we need to help the mentally ill, the drug addicted, the working poor. We need to help the developmentally disabled to rise, and we need to help our friends in the minority community develop entrepreneurship.”  This compassionate rhetoric ultimately set him apart from his counterparts.

4. Trump lost the room, but will (probably) still win New Hampshire. True to form, Donald Trump was unapologetic during the debate and stuck to his message of making America great again by rolling back the trade deals of the past generation and bringing jobs back to America’s shores. One of the most memorable moments of the night, however, involved a heated back and forth with Jeb Bush about Trump’s use of eminent domain. During the exchange, Trump told Gov. Bush to be quiet and shushed him, which was met by several boos in the audience. Instead of moving on, Trump derided the entire audience and quipped, “that’s all of his donors and special interests out there.” This time nearly the entire audience booed in response to the comment. It was the defining moment when Trump lost the room, and none of his subsequent comments gained much traction with the audience. Interestingly, this comment did not really impact pundits or television viewers’ perceptions of his debate performance, which goes to show you that in politics, medium matters.

5. Policy had a place in the debate. Despite the rancor and memorable feisty exchanges, the candidates did debate a wide range of substantive policy issues, including taxation, foreign policy, torture, and immigration. The moderators also discussed policies particularly relevant to New Hampshire. One particularly poignant topic was a discussion of the heroin epidemic sweeping the country. This is especially relevant to the Granite State, where 48 percent of the population reported knowing someone who has abused the drug. Cruz used the discussion as an opportunity to discuss his family’s brush with drug abuse. Christie detailed New Jersey’s approach under his governorship, talking about how community policing helped people get treatment and how the state eliminated prison sentences for first time non-violent drug offenders.

Returning home from the debate, I wondered how this campaign stacks up against prior presidential elections. I was reminded of Hunter S. Thompson’s defining piece of gonzo journalism, Fear and Loathing on the Campaign Trail in ‘72, where he set out to “record the reality of an incredibly volatile presidential campaign while it was happening.”

Though written 44 years ago, undeniable parallels exist between 1972 and 2016—the main difference is that this time around both parties are grappling with a fight between the establishment and the anti-establishment in their ranks. These fights are important, because they represent a battle for the soul of the parties that could subsequently define the next generation of political leaders and policies that shape America.

So, buckle up and stay focused, America—the 2016 election should be a wild ride. Next stop: the New Hampshire primary.

Andreas Westgaard is a first-year Master in Public Policy student at the Harvard Kennedy School where he is an associate editor for the Harvard Kennedy School Review. He previously worked at the Federal Reserve Board and the Pew Charitable Trusts in Washington, D.C., where he focused on issues including state and federal fiscal health, financial inclusion, and data-driven elections policy. Andreas was born in Oslo, Norway, and grew up abroad in London and Moscow.