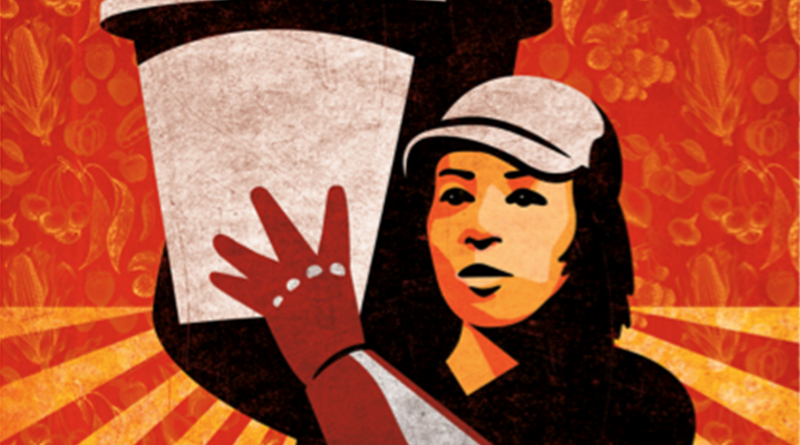 The scene is familiar. Fresh snow coats your grandparents’ front lawn. The smell of turkey permeates. Your aunt beams as she collects obligatory compliments that her stuffing, once again, is a hit. Finally, your family members find a place at the table and your grandfather asks each of you to name something you’re thankful for.

Does anyone extend gratitude for the hands that picked the cranberries you will soon eat? For the workers who labored over the veggies in the green bean casserole?

This Thanksgiving, American consumers have the option to purchase Fair Food-certified produce. The Fair Food label tells shoppers that the workers behind the product were guaranteed basic human rights such as water, shade, and fair wages.

Anyone who doubts human rights need protection in America’s agriculture industry has never visited Immokalee, Florida, the country’s tomato capital. In Immokalee, up to 10 farm workers sleep in one rented trailer, according to the National Farm Worker Ministry. They work alongside harmful pesticides, without much rest or shade, and earn around $40 for a full day’s work. Female workers withstand frequent sexual harassment. Parents drop off kids at daycare centers before sunrise, climb into converted school buses to travel up to 100 miles, and reunite long after sunset.

The challenges faced by the people of Immokalee are far from new. The day after Thanksgiving 1960, CBS aired “Harvest of Shame” to highlight the plight of American migrant workers. In the film, African American farm workers are sorted into trucks as Edward R. Murrow narrates the scene, saying, “This is the way the humans who harvest the food for the best fed people in the world get hired… We used to own our slaves, now we just rent them.” Today, the faces have changed but the injustices remain. The USDA estimates more than one million hired farmworkers are employed in the United States, and the majority of Florida’s migrant farm workers come from Latin America.

So what can we do? Thankfully, one organization is making it easier for consumers to help.

The Coalition of Immokalee Workers (CIW), a community-based advocacy organization for field workers, first met in a church basement in 1993. Since then, CIW has received the Clinton Global Citizen Award, the Roosevelt Institute Freedom from Want Medal, and the U.S. Department of State Trafficking in Persons Hero Award. As part of the CIW’s Fair Food Program, produce buyers agree to exclusively source fresh tomatoes from growers who uphold ethical standards and provide a decent wage. As a result, workers earn an extra penny per pound for the tomatoes they pick. That’s enough to push annual wages from about $10,000 per year to $16,000.  Farmers also commit to zero tolerance of forced labor, child labor, and sexual harassment.

Yet CIW’s work is far from done. And the Fair Food movement needs our attention and support.

A new award-winning documentary film produced by actress Eva Longoria, Food Chains, captures the journey of the CIW Campaign for Fair Food. As Boston Chef Jose Duarte observed at an October 2014 Food Chains film screening, “No one ever asks me who picked this tomato or strawberry. No one ever asks about the people part of the process.” Instead, we see broad consumer apathy. The Fair Food label debuted October 2014 to empower consumers to discern among food options. By creating the label, CIW invites all of us to join the movement for ethical farming. At least 90% of the nation’s tomatoes come from Florida, and more than one dozen fast food giants and retailers have signed onto the Fair Food Program. Taco Bell was the first to sign in 2005 and was followed by Chipotle, Subway, Trader Joe’s, Walmart, and others.

CIW’s impact continues to grow, According to Sean Sellers, Senior Investigator/Monitor of the Fair Food Standards Council. As of summer 2015, the Fair Food Program covered tomato operations in seven states: Florida, Georgia, North and South Carolina, Virginia, Maryland and New Jersey. As of this winter, the program will cover a strawberry grower in Florida and at least two bell pepper growers in Florida.  The Fair Food Program is also assisting Vermont-based Migrant Justice in their efforts to replicate the program to improve conditions for dairy workers in the Northeast.

Some may argue a farm labor certification process could raise costs for consumers. Yet the benefits of the Fair Food label far exceed any costs. According to Food Chains director Sanjay Rawal, even doubling the wages of all farmworkers would cost a family of four about $0.18 more for food each day.

Why aren’t more retailers on board? According to the company’s website, Publix views the CIW campaign strictly as a labor dispute between the growers and employees. Publix therefore will not pay workers an additional penny per pound unless the farmers increase prices. This framing of the conflict falls short – Publix knows that growers would readily increase the price if they believed retailer giants would meet the new price. So a commitment is needed from the top of the supply chain. This is why the CIW developed the Fair Food Program.

This Thanksgiving, choose fair food. When you buy fresh tomatoes, ask store managers if they participate in the Fair Food Program. If they say no, ask whether they plan to join. Let’s set a place for fairness at the table with our loved ones.

Caitlin Ryan (@cryandc) is a Master of Public Policy candidate at Harvard’s Kennedy School of Government. She previously worked as a management consultant at Deloitte, where she advised senior government officials within U.S. law enforcement and Intelligence agencies. In that role, her data analysis efforts led to the identification of 21 traffickers and 15 survivors of sex trafficking. Caitlin helped build the capacity of several non-governmental anti-human trafficking organizations, and now serves on the board of DC Stop Modern Slavery. She hails from Lindstrom, Minnesota and attended Georgetown University’s School of Foreign Service.