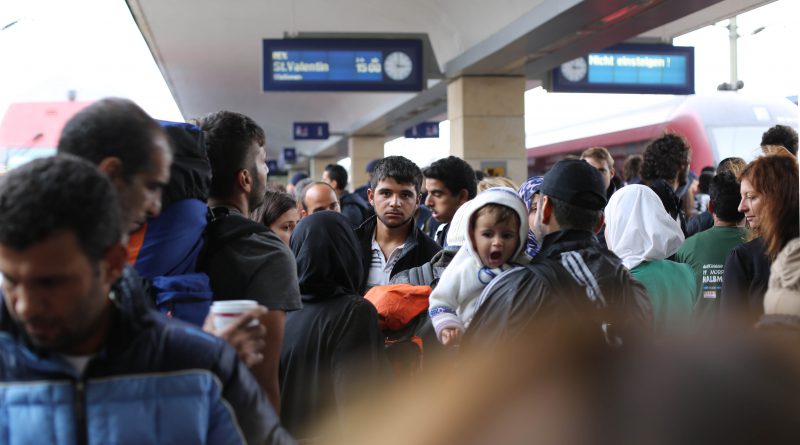 BY ANDREA BLINKHORN AND DANIEL TOSTADO

Washington, D.C. – As the asylum interview dragged into its second hour, Sandrine became very sleepy. In my office in D.C. sat two sisters, Sandrine and Camille, ages 15 and 17. During political unrest, government militias killed their parents, and so over the course of 18 months, they fled thousands of miles from their home country of Congo-Kinshasa. I was working at the time as a legal aid for refugees in Washington, providing services to asylum-seekers like the two sisters.

Noticing Sandrine’s sleepiness, I realized that I had a small pillow padding my chair, so I detached it and gave it to Sandrine. Embarrassed, she grudgingly accepted the pillow, placed it on my desk, and fell asleep. Camille and I conducted the rest of the asylum interview, watching over Sandrine and speaking in hushed, reverential tones.

Albany, N.Y. – Fatima walked into the U.S. Committee for Refugees and Immigrants Albany, NY office with a vigor and energy that belied the violence and unrest she had fled. Despite the fact that she held a college-level degree in nursing from a university in Sudan, she recognized that the path to a similar position in the United States would be long and frustrating. She was unperturbed by both the challenge of resettling in the United States and of starting her education over. Arriving after a long vetting process and laden with the expectation of repaying the loan used to buy her and her children’s flights, her sense of purpose and hope was a reminder of what an opportunity to live in the United States could mean.

The past week has been filled with tragedy around the world. For us, it’s personal. In the Syrian refugees we see our former refugee clients in Washington and New York. We see them in our classmates, our friends, and our family members. We see both their desperation and exhaustion, but we also see their hope and the glimmers of optimism for a better future.

In the face of such recent tragedies, American political leaders are at a critical juncture in how they choose to respond on our behalf. Do we take the moral high road, one that recognizes that the faces of refugees in the Emma Lazarus poem are those like Sandrine and Fatima: “tired and poor, yearning to breathe free?” Or do we turn our backs, eschewing our national values and founding principles in favor of protectionism based on an emotional gut reaction to tragedy?

What we expected to hear out of our nation’s leaders was a rhetoric that acknowledges the inherent humanity in every person, rhetoric that doesn’t “other-fy” refugees like Sandrine or Fatima.

What we expected to see out of our elected leaders was compassion and moral leadership. Moral leadership like that of Senator John McCain, who in reaction to the suggestion that the US should only let Christians in, stated that, “all children are God’s children.” Moral leadership like the U.S. Conference of Catholic Bishops who proclaimed, “The United States must show leadership during this crisis and bring nations together to protect those in danger.”

Instead, what we are hearing are harsher tones of hardened hearts. On November 16th, New Jersey Governor Chris Christie stated, “The fact is that we need appropriate vetting, and I don’t think orphans under five… should be admitted into the United States at this point… We need to put the safety and security of the American people first.”

Similarly, Massachusetts Governor Charlie Baker stated that he is “not interested in accepting refugees from Syria.”

Governors Baker and Christie are not alone. In recent days, 26 other governors from around the country have issued statements against accepting Syrian refugees into the United States through the refugee resettlement program. With the Paris terrorist attacks still fresh on our minds, these calls to limit the number of Syrian refugees foster fear rather than encourage understanding and unity as a nation.

A common theme in the governors’ statements was the reference to the safety and security of the American people. Let us be very clear: the safety of the American people is paramount and not to be taken lightly. What is misguided about the current framing of the issue is that it fails to take into account how effective the refugee resettlement process actually is. Due to its rigor, the U.S. refugee resettlement program is the least likely way for a terrorist to come into the country. As former Secretary of State Condoleezza Rice has remarked, “what the United States has done is to be open to people who are fleeing tyranny, who are fleeing danger, but we have done it in a very careful way that has worked for us.”

We have seen in our work that the refugees who are resettled in the United States pass through a rigorous process that takes between 18 and 24 months on average and includes a thorough background, health, and security check by the FBI, the Department of Homeland Security, and the State Department. And according to the Migration Policy Institute, of the 750,000 refugees that have entered the United States since 9/11, none have been arrested on a charge of domestic terrorism.

If Republican governors are holding out for a safe refugee resettlement process, they already have it. The best choice is to continue with the current resettlement process that responsibly welcomes in future Americans. Since the 1980 Refugee Act, the United States has accepted over 3 million refugees, more than any other country in the world.

A nation becomes a moral leader when it lives up to the lofty ideals that it claims to embrace. From our origins as a nation of immigrants until now, we have the track record proving that we have been the most welcoming nation to refugees. We hold ourselves to a high standard and indeed, we are a country of refuge, par excellence. Why do we obscure our role as moral leader by promoting nativist rhetoric and closing the door to the largest refugee population since World War II?

Elected officials are given an immense responsibility and platform in society to demonstrate leadership in times of peace and crisis. Yet using rhetoric that antagonizes a group of people fleeing from war paints them with a broad stroke and brushes over the nuance of the refugee’s backgrounds and religious beliefs.

Rhetoric matters, and it is time for elected officials to realize that words have consequences. The challenge of balancing safety versus openness is not new to Americans. Creating a narrative of “us” versus “them” promotes fear, undermines tolerance, and threatens the values of freedom, equality, and liberty that Americans hold dear.

Fear is present in every generation, but we are not a cowardly nation. The world looks to us for leadership not because of our fear, but in spite of it. This issue is too important to be reduced to partisan positioning. It is not American to use the plight of others to promote a political agenda. We, as Americans, should expect more from our nation’s leaders. We, as Americans, should support programs that exist to help the world’s most vulnerable like Sandrine and Fatima. Because, as we all know, that is how our country began: a nation of the persecuted, seeking refuge in a foreign land.

“The bosom of America is open to receive not only the opulent and respectable stranger, but the oppressed and persecuted of all nations and religions.” – George Washington

Andrea Blinkhorn is a Master of Public Policy candidate at the Harvard Kennedy School. Before coming to the Kennedy school she worked at the U.S. Committee for Refugees field office in Albany, NY where she worked on job placement services and community partnership building.

Daniel is a concurrent MPP2 at the Kennedy School and a 3L at Georgetown Law. He has provided legal aid for refugees in Washington DC, and abroad in Morocco. He intends to become a human rights lawyer specializing in refugee issues and policy.